Word Of The Day

Cough, sneeze, hack, wheeze and sometimes a short pause and then cough, sneeze, hack wheeze  all over again, all night long. I did however say for better or worse, so the next morning as I sipped my coffee and MeMa sat across from me feeling exactly how she sounded I said that she should stay home today and get some rest and I being the most wonderful Poppi in the world would take “Little Terrorist #2 to the Zoo as we had planned. Anyway….Brooklyn and Poppi had a great time at the Zoo. I loaded a stroller and diaper bag with a change of cloths into Vivian, buckled Brooky into the car seat and off we went,  Grandfather and Grandson for a fun filled day alone at the zoo. Did I just say alone? As we rounded the corner and came over the last hill entering the parking entrance the cars came to a stand still and the sign said “Parking Lot Full” and directing us to the bypass road which would take us to the additional parking and we would have had to catch a shuttle back. I was just about to utter one of those non-example setting profanities which a young grandson should not hear when from the back seat I distinctly heard the word “crap”. I glanced into the rear view mirror at a very serious little face which only made me laugh louder. That was as good as any approval he needed so crap became the word of the day. With some masterly driving and a little bit of cheating I managed to get a parking space in the lot we intended to park in the first place. As I pushed Brooklyn passed the security man standing at the road block his wordless disapproval came through as I said “couldn't see the sign…..only have one good eye…..you see…..have a great day”. We were out of ear shot before the “word of the day” was vocalized loudly from the stroller.  We visited all the wonderful animals that both Brooklyn and Poppi wanted to see, played for a bit in the kiddie park while this old man rubbed his feet. 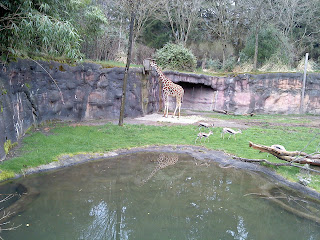 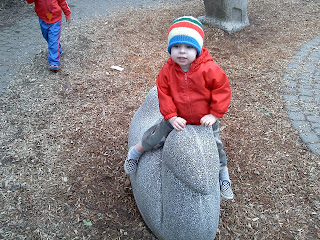 We then went in pursuit of the Anaconda, Brooklyn's favorite. As we stood in front of the enclosure he whispered “I like snakes Poppi”, we couldn't stay long as the neck hold he had on me was starting to seriously hamper my breathing. We then went to the Africafe for a nice pleasant lunch overlooking the Bird Aviary. I counted twenty three different species flying below us as Brooklyn pointed out the “bird poop” on the Banana leaves…. several times…..loudly. After lunch I asked Brooklyn if he was ready to go home now? But he wanted to see all the animals again so I headed to the Cascade exhibit remembering that when his father and uncle were his age this was “too boring” for them as it was filled with animals that they could see in their own back yard. It stretches on meandering pathways through a very wooded area. We had gone a short ways when I noticed the stroller was very quiet……success! 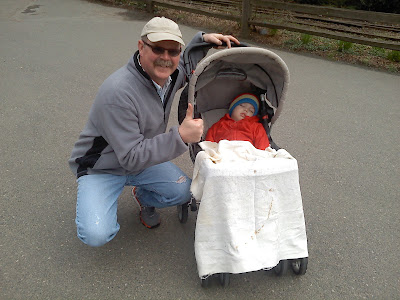