Treasures of The Past

Watching the Queens Jubilee on television inspired me to rummage through the library shelves and find my Coronation Book, that is my Coronation Book of their Majesties King George VI and Queen Elizabeth.
I was given this most cherished book from my first employer when I lived in England, Beryl Kelland who owned and operated the Ardley Boarding Kennels near Bisester Oxfordshire. Inside the book I found some news clippings that I had stuck in. 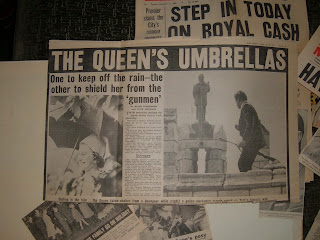 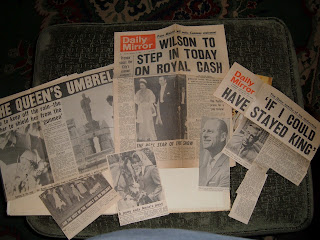 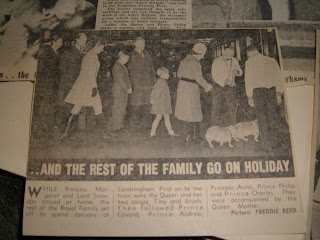 But the photos in the book are of this remarkable family and its a thrill to look back and see what this family has been through. 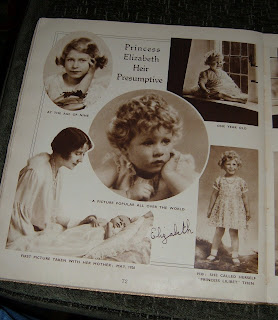 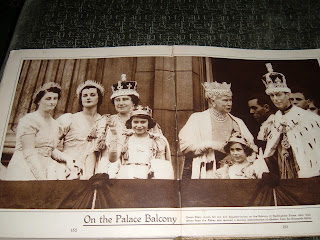 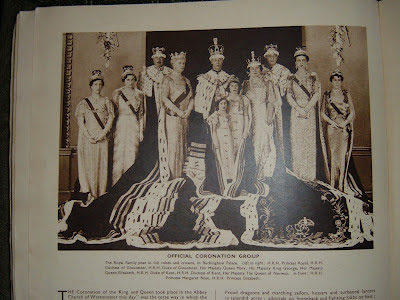 This last Saturday started out innocent enough, we had plans to attend "Little Terrorist #2" Brooklyn's fourth birthday party and that was to be the extent of it.  The party was to happen in the local park unless rain, then it would take place at their home.  Three hours prior I received a frantic call from a Supervisor with the local Transit Agency....."Hello Doc? We have a large exotic bird that showed up three days ago and no one has called you so I just thought..... well.....if you would be so kind as to come rescue it before it gets killed by one of these trains."  I was still dressed in garden grubs and was planning on doing some watering and cleaning up in the greenhouse before showering and dressing for the party.  MeMa was meeting with the Hospice people getting her father transferred from hospital back to his care center.  I asked what sort of bird he thought it was as that would play on what equipment I took with me.  He said "It has blue and white and some black stripes on it."  I asked if it was a parrot like bird to which he stammered and then said, "I don't know birds, but it walks like a chicken but it's not a chicken."  I asked if it was a pheasant, to which he asked ...."what's a pheasant?" At this point MeMa came home so I told him we would be there in twenty minutes.  I loaded one of my largest cages into my truck along with a large blanket and off we went.   On arrival the Supervisor met us and informed us that he and another employee attempted to capture the bird themselves and only frightened it up the side of an ivy covered bank that ran about a quarter mile, but they had an idea were it had disappeared.  I was less than hopeful at finding this mysterious exotic bird and the recent heavy rains did not make the thought of climbing through all that wet ivy and brush very appetizing.  I started climbing the bank getting soaked to the skin in the first few feet and crashing through the brush up to my shoulders in some locations.  MeMa stood with blanket in hand and a reassuring smile on her face to urge me on.  I stomped around hoping to send the bird out from its hiding place and was just calling it a wash and heading back down the slope when out it dashed towards the supervisors waiting on the pavement.  They all turned and ran like frightened school girls leaving MeMa standing firm and keeping it from running further.  I could see that it was a pheasant at this point but watching the fleeing men it could have been a man eating Pterodactyl.  The bird quickly ran into some brush and was quiet, so I approached the area and soon saw the frightened bird crouched unmoving deep in the undergrowth.  I slowly slid my hand in and then grabbed it by the legs hoisting it out at the same time.﻿

﻿
So while MeMa went off to the feed store for pheasant feed I installed the cage under the orchid bench in the greenhouse as it is very quiet and a good place for me to observe it without upsetting it any further.
Showered and dressed we then went to the birthday party which because of the continuing rain was held at the house which is small and the number of guests was.....large!  After hugs all round and setting Brooklyn's gift on the table with the rest of the booty I quietly slipped crossed the street as there was an Estate sale going on......SCORE!!!! 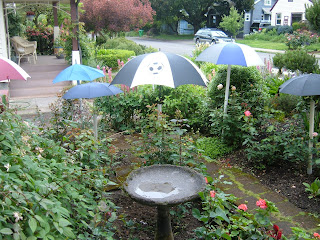 The Spring Rose Show is this Thursday and with that in mind I started placing umbrella stands over all my hopeful entries.  The "Crazy Cat Lady" soon came out on her porch to hiss out her usual questions, so after covering what I could I retreated back into the house. Hissssss.
Posted by Doc at 10:29 PM 4 comments:

New Resident in the Pond 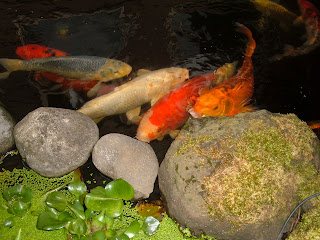 On my list of things I cherish most, my Koi are right at the very tip. I have raised them from three inch fingerling's to their current ranges in size of eighteen to twenty some inches, and ages of ten to twenty three years old. If they stay as healthy as they are now they could live for seventy five + years. I pamper and fuss over them when something is not right, they all have names and come swarming like bees when they see me, especially when I have their food tin in hand. In an enclosed environment as a home pond one must always be looking for illness or infections that could rapidly spread to the rest of the inhabitants and that is one reason I don't add new koi to the pond. But......but that changed a month ago when a neighbor from down the street approached me whilst I was working in the front garden. He first asked if I had use of some very nice top of the line pond filters that he was giving to me free. I'm sure I looked quite puzzled when I said yes to his offer. He then told me that he was dismantling his ponds and building a shop in their location. His neighbor claimed the sound of the running water was an annoyance to them. and after a falling out claimed that it was the same neighbor that tossed an open bottle of brush killer into his pond and killed all but one of his Koi. He asked if I would please take this last surviving koi and put her in my pond. After listening to this horrific tale of woe I accepted. After two weeks of quarantine I felt she was healthy enough to add to my population, but I still watch her carefully for any sign's of illness or distress as her past living conditions were terrible, it was a large pond but the water was cesspool quality and it is a mystery that she survived as long as she has. 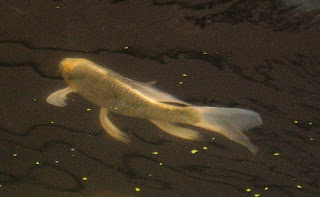 She is what is known as a Butterfly Koi due to the long flowing fins, not a pretty girl but has a sweet disposition and is slowly becoming tame. She is sort of a white metallic rather blah colour and has a brown blotchy sort of face that would stop a clock. I have tried to match a name to her but when I see her face all I can think of is an action figure from when my son's were little...."Skeletore"! So she remains un-named.

So at the moment all is tranquil in the pond, and still thinking of a name..... 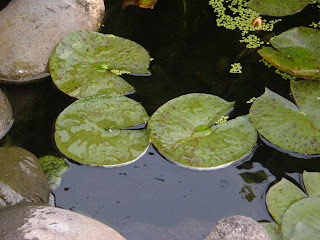