And it is about time! We went from two inches of snow one day to sunny and 51 degrees the next, but it seems to be the end of the bad weather and now we have warm rain with a few dry spells but mostly rain.  The nice thing is that the flowers are starting to bloom and the trees are starting to leaf.  So I thought I would post a few snaps of what is in bloom around the gardens and the greenhouse.
﻿﻿﻿
﻿
﻿﻿

Another Day Of Winter

We have set another new record for snow fall late in the year, I think they said it was 1941 ish when we made the last record.....exciting? Well no its not, I am so sick of this bad weather that I could just.......well I could pout but I am the only one that made it to the office, so a good pout would only be enjoyed by myself.
This time of year I am normally so busy in the garden that I usually only work three to four days at the office and then spend the rest of the week happy as a lark with gardening, planting the seed trays in the greenhouse, traveling around to nurseries looking for bargains.  But everything is under snow and the insulation is still up in the greenhouse which is still full of the stored non winter hardy plants which take up all the room needed for the seed trays.  I pruned my roses on schedule in the last week of February and first week of March, but with this snow fall they will most likely suffer cane damage.

I was recently asked why I have not posted lately, well there is not much to post for a garden blog when one has no garden to post about......I NEED SPRING!!!!

Early last fall our neighbor "Crazy Cat Lady" yowled through the fence at me and asked if I would like a tray of succulents and cacti that a friend had dropped off.  She claimed that she hates these sort of plants.  I have an abundance of these plants but mine are all large plants that winter in the greenhouse and then we set them all out together up next to the house in the driveway.  We call it the Yuma Garden as the largest Golden Barrel Cacti was collected on a visit to my parents who winter in Yuma Arizona. Just like the City of Yuma this side of the house is all concrete and blazing hot in the summer.  So just to quiet her so she would go back to her scratching post and leave me alone, I told CCL that I would be happy to take the plants and they would make a great addition to the Yuma Garden next summer.  They all looked to be different species of Aloe and Echeveria so I took the whole lot and dumped them in a back corner of the greenhouse and forgot about them.  Most had very little soil left in the pots so after a month in the corner I dug them out and as I replenished soil I checked out health and condition of each plant.  I was quite surprised to find a three inch pot containing an equally small specimen of  "Crassula dubia". 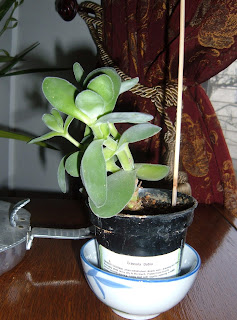 At first glance I thought it was just as small Crassula ovata which is the common Jade Tree of which I have a large one that was a gift from my twin brother many years ago.

Same family but dubia has the fuzzy leaves were ovata is smooth and shiny.  Dubia also is more compact, growing in a tight mound and sends up a flower spike instead of covering itself with little flowers in the spring like our big Jade does.
There was actually a nice variety of plants in the container that I originally tossed unceremoniously into the corner of the greenhouse, they should all perk up well once they start getting a little TLC.

Yes, dear Lord that would be another canine member of our family padding her soft feet across the Rainbow Bridge, treat her well and give her our love as she meets up with Tyler and Toby. 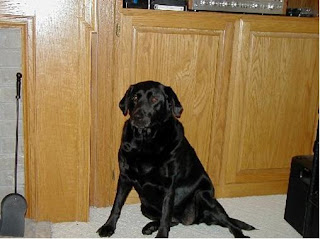 It has been a heck of time for canine members of our family.  Just three days after my twin brother told me that his corgi, Toby had passed in his sleep, my younger brother e-mailed that he had gone home at noon from work to let his senior black lab, Shadow out for her afternoon constitution and found she had passed in her sleep as well.  If my memory suits me, she was at least fifteen years old, which is very good for a very large dog as herself.  I remember the day my brother called and asked if I would like to drive to Eugene and visit a kennel where he was thinking of buying a pup for his two children Carly and Nick.  On the trip down I told him all the tell-tale attributes that he was to look for in making a proper pick and keeping in mind his children getting the best dog to grow up with.  It was a wonderful kennel at a large country home and we were greeted by the owner and several senior labs. I love to see this because that means they keep their dogs as family members and not just a business. We soon went to the barn where the puppies had just finished eating.  There were so many puppies rolling and tumbling about trying to be the first to reach us.  All the words of advice on picking the right puppy went out the door as Carly and Nick let the puppy pick them.  Shadow, as she was named was the best fit as she soon let us know and was loved by all of us, greeting us all at holiday meals, lumbering after the children when they played on the back lawn, fetched tennis balls until you thought her lungs would give out.  She did her job well, danced with joy when her children were happy, sulked under a black cloud when her children were sad.  But most important of all she was always there.