In years past I have always grumbled at the prospect of family get togethers that included the four footed members as well.  Our Miss Betty (Pembroke Corgi) is soooo polite and sweet that if she were a working girl her sheep would just follow her without a bark or nip at the heels.  Then there is our little Sophie aka "The Little Nazi" (Wire haired Mini Dachshund) also very sweet, she just has a big mouth.  Our youngest son and family include Ninja (Chihuahua) or "The Princess" who quickly becomes the alpha dog at the Manor.  Then there is Popeye (Boston Terrier), which was when the grumbling began.  I love my oldest son dearly, but when it comes to animals he has not a clue.  His idea of house training was to put in a pet door and let the dog figure it out himself....yeah.  Leash training included a good strong harness so he could pull my 30 something son faster on his skateboard.  All basic commands such as come, sit or stay all translate to one thing in Popeye's brain......grab the closest thing in his slobbery mouth and act completely crazy whilst taking great leaps into the air and as close to the humans face in order to see if they are enjoying the moment as much as him. 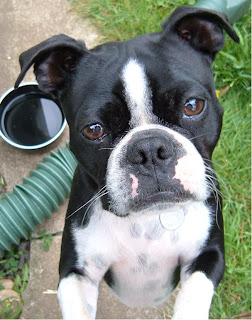 So when Popeye came over he was forced to stay in the sunroom by himself because he was so excited by the presence of so many people and other dogs that it was like the results of feeding pure sugar to an ADD child on the loose at Disneyland.  He would soon have the other dogs snapping at him or one of the "Little Terrorists" crying because he jumped on them in his excitement.  After it was all over it usually meant a double cocktail night for MeMa and myself as we sat and collected ourselves.  But the world changes all the time doesn't it?  Nothing ever stays the same and that would include my disdain for the excitable Popeye, the dog from hell!  My son moving back home was a big enough life changing event for all concerned but then one day I opened my eyes and became conscious of some snorting and farting noises which turned out to be Popeye.  In this dream MeMa was assuring me that he was just a very misunderstood dog, that he was really a good little boy and that I really should be happy that he was going to stay.......that's right.....stay!  Damn it wasn't a dream!  In the first ten minutes that he was there he lifted his leg on a wicker chair in the Sunroom which I silently cleaned up because as all good dog trainers know if you don't catch them in the act it does no good to punish the animal.  In the next ten minutes I walked into the kitchen to see Popeye lift his leg on the leg of the butcher block table.....enter the Dog Whisperer....I pounced on him like a mountain lion would his pray.  Grabbing him by the neck pulling him down to within inches of his puddle I quietly explained to him that if he was to behave in this manor from this point on he would be spending his remaining days known as "that dog chained up under the chicken house"!  A good deal of time has gone by since that day, a bargain had been struck between a certain Boston Terrier and the Dog Whisperer.  No more conversations whilst inches away from ones own urine and no threat of cohabiting with MeMas Ladies.  He really has turned into quite the little gentleman.

Winter weather is starting to act like the real thing here,  but then we will get a little dash of spring- like weather just to confuse things.  I have the gardens here at the Manor pretty much set for winter.  All the roses trimmed down to knee high to prevent winter wind damage, fruit trees cleaned up and sprayed, the now vacant parakeet aviary cleaned out, garden shed in order, firewood stacked and covered.  Out in the hen house MeMa's ladies have stopped laying for the winter and I dusted them and the nest boxes for bird lice.  So other than a little light maintenance and picking up after the dogs I just sit back and wait for spring....Yeah right!  You may remember the post I did about the mystery hole and tunnel from the garden into the greenhouse, well that turned out to be a very large disgusting rat.  I caught it in a box trap a few days after that post and quickly and humanly dispatched it as we can't have things like that running around the gardens with the "Little Terrorists" at large.  I spoke to the manager of the nursery behind us and he said that they would bait all their out buildings where they store fertilizer and such which is a food source.  Since that first one I have caught nineteen others so something needs to happen soon.  I don't mind the occasional field mouse but large rats are enough to make one get the heavy artillery out.  They love the warm interior of the greenhouse but cause a lot of damage whilst they scamper about knocking orchids off the staging and turning things over looking for something good to eat.  I keep all possible food sources in plastic bins sealed with tight lids, so they are a bit out of luck there.
I promise I wont show pictures of the fallen enemy but here are a couple of orchids fresh from the greenhouse.