"Bull in a China Closet" I'm sure most of you have heard that description and it was usually used by a frustrated parent whilst issuing a verbal scolding to a clumsy offspring for breaking a cherished memento. Here at Menagerie Manor it was quite frequently describing Popeye, MeMa's Boston Terrier. He could never just walk into the house, he would stand at the door with the other dogs and then when the door opened he would bolt through knocking the other dogs out of his way and sometimes the unlucky human that opened the door and was not privey to his great need to enter quickly. If one were to thumb through their dog book and come across the page devoted to the Boston Terrier they would be welcomed by the pleasant description of said dog as " the American Gentlemen among dogs" ??????? 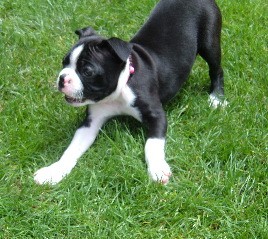 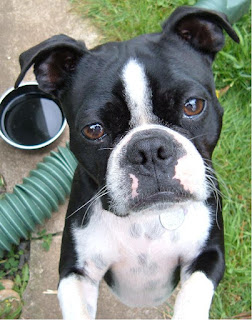 He was our eldest son Nathan's dog for the first few years but came to live with us when he and his wife seperated. I tried to rant my way out of it saying "Nathan can come live here but that dog will not step foot in this house.....he pee's on everything......he is not a normal Boston, he is rude and that farting could kill one of us." 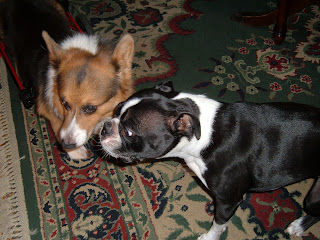 Soooooo, when Nathan and Popeye moved back home there were alot of adjustments to be made mostly on my part because MeMa was in a state of joy not only having our Nathan back in his old room but our grandson Brooklyn as well and Popeye to boot.
The other animals were in the same camp as myself when it came to Popeye. There were several skirmishes between the other dogs that very easily could have ended badly but I was fast on my feet to break things up. Betty was very tolerant and I chalked that up to her earlier training as a therapy dog, no it was usually the "Little Nazi" Sophie who has no patience for rude behavior.
A short while later Nathan told us he was taking an apartment but would not be taking Popeye because of a no pet policy. MeMa assured him that Popeye would be fine living here.....and that I was in complete agreement.......? 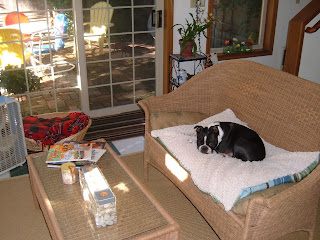 I have to admit he was no dumb, dumb, every rude or unacceptable behavior that was met with a stern verbal reprimand was usually never repeated but there were a few times that he was banished to the sunroom to spend some time alone thinking about his bad behavior. 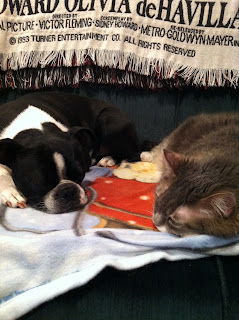 Soon he was part of the crowd at Menagerie Manor and a fare amount of peace and tranquility was returned to the house. 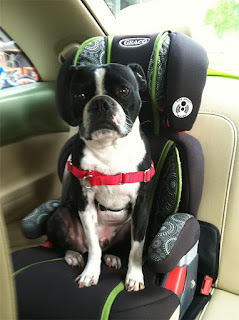 Popeye loved to go for rides in the car and his favorite treat was going with MeMa for her cup of coffee because the nice people that worked there always gave him a dog treat. When his MeMa was away he would sit and watch the door for hours anticipating her return. 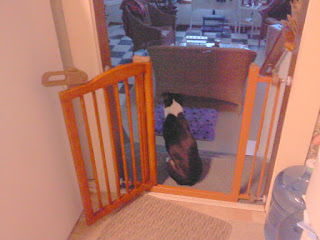 Once in a moment of weakness I felt sorry for him so I drove him out to the airport in MeMa's litttle Volkswagen Beetle to pick her up and he watched every plane land with great interest. 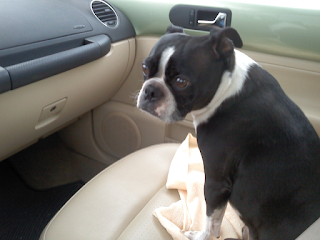 As I wrote in an earlier post he developed Cushings disease, we knew that his life would be cut short. His vet advised us that we should make him comfortable as the treatment for the disease was dangerous and only prolonged the life of the dog by one year. We tried several natural remedies and nothing worked as the disease progressed. As it is a canceer of the pituary gland he was ravenous at all times resorting to eating his own feaces and anything else that had an oder to it. Most of his hair soon vanished forcing him to depend on his custom jackets that we had made to keep him comfortable. 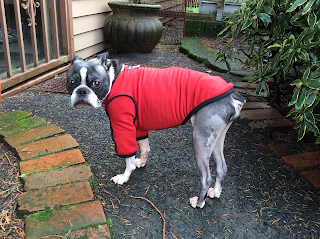 His vet told us that we would know when it was time to end his battle, that happened last Wednesday. Nathan joined us to say goodby and see that his life ended peacefully and with some dignity.
After, MeMa and I returned to Menagerie Manor so that our Sophie could see that Popeye was at peace before taking him to be cremated.
﻿﻿ 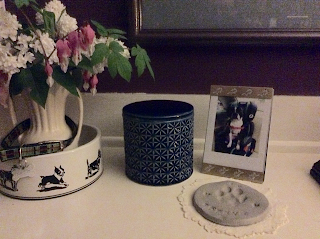 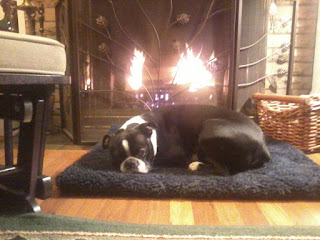 This getting old stuff is getting painful.......ouch!
Every Thursday's routine finds this old gardener and MeMa getting up at 5:30 and heading over to the youngest son's home feeding breakfast to the two "little terrorists" while their Mommy and Daddy stumble around getting ready for work. After breakfast MeMa takes Taeya off to school then we clean house and take little Lucy to her gymnastics class back over on our side town. Then we head back to Menagerie Manor to eat lunch and Lucy helps me take care of the animals. Lucy has a short nap in the car as we head back clear crossed town to pick " Sissy" up at school and back to their house were we do homework and fix supper before Mommy and Daddy get home from work. We all eat supper and leave the rest for lunches or whatever! And then MeMa and I drive the long trip across town getting home around 8:00 pm.
MeMa had a poetry reading to attend to tonight at 6:00, so the morning routine was the same except when we picked Taeya up from school we drove across town (one hour) to Menagerie Manor, did some homework, made supper and let the girls have a good romp outdoors. MeMa headed off to her poetry read while the girls and Poppi ate supper. And next is the part of the evening where it all went wrong. Lucy came in from the garden while I was doing the clearing up and said "Poppi...can you come play tag with us?" "Of course",  I say and like an old fool I head out to the garden and the chase was immediately on. I was standing on the patio when Lucy screeched, "You better run", which I did. While screaming like a girl I ran across the patio, crossed the foot bridge, crossed the flag stone and just stepped into the gravel on the walk way where I lost my balance and skidded to a halt on my face coming to a complete halt when face met the brick that lines the walk. I stumbled up and turned to face Lucy who was in hot pursuit of her victim, Lucy screamed as blood gushed from my forehead her older sister heard the commotion and rallied like a trooper, ran into the house to return with a towel to hold to the wound then took charge of her frantic little sister calming her almost immediately so this old foolish gardener could go clean himself up. When Mommy came and picked her scared girls up things had calmed down. A short time later MeMa got home and this old gardener was looked after quite lovingly and it was decided that I may have also broken one of my toes.......jeez! 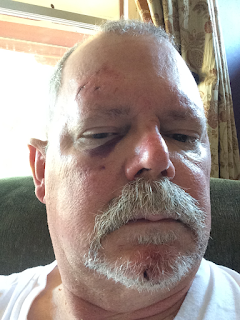 Another surgery behind me........."cancer free".....??????? But that was what I was told before. Not that I am negative about the whole thing, I am quite the opposite actually. I am feeling so much better and have quite a wonderful last couple of weeks. Easter Sunday was spent with my beautiful family, laughter and a fantastic brunch prepared by MeMa, the perfect diversion the day before surgery. All that is out of the way, life's returned to normal. MeMa and I decided we needed a little fun so we headed to the coast. It was also the day that my surgeon would call with results on the biopsy. First stop was in Salem for a hearty breakfast at the Pancake House and lots of coffee. Then on to our first casino. My surgeon removed three tumors but there was a suspicious area that he biopsied. While at the casino we received the call telling us that the results of the biopsy say no sign of cancer. With that news MeMa said, "Let's go for a walk on the beach." So out of smokey casino air and out into the fresh salt air.


A new light was on the day ahead of us, we jumped into the car and headed inland to get lunch and another casino. We dined at McMenamins "Hotel Oregon" in the town of  McMinnville. We recently purchased McMenamins "Passports." The object of the passport is when visiting a McMemamins establishment, you receive a stamp on the dedicated page for that particular restaurant or bar (Hotel Oregon has six). When we received our first five we were given a mission to find a painting of the hotel's resident ghost blowing smoke. The hotel is ancient and its many floors have winding halls and hundreds of paintings and posters everywhere. We found the painting on the third floor down a very narrow passageway, took the required photo with our cell phone and returned to the main lobby  where we received our last stamp and each received a free gift.


There are many McMenamins establishments all over Oregon and Washington states and all are in historic buildings purchased and decorated by the McMenamin brothers. We both did well at the casino's, did some shopping at the outlet mall but I think the most fun was at lunch and completing that first page in our passports.
Then it was back to Portland and home where the sun was shining and the garden vibrant with spring growth and color. One of the newest additions to the garden is a yellow flowering Magnolia called Sunburst, not only a beautiful yellow but very fragrant as well.
Posted by Doc at 9:48 PM 18 comments: