Everyone who knows me is aware that I do not enjoy change.  It is a fact that I will go out of my way to avoid changes.  I suppose this change takes place at a good time because I will leave for Arizona to visit my twin brother in Phoenix and my parents who are wintering in Yuma.  You may recall my post titled "Unwelcome Visitor" posted January 17, 2012 which dealt with an invasion of large rats causing havoc at the Manor.  It started out as one rat tunneling into the orchid house and making a mess everywhere.  From the greenhouse to the chicken house then we started noticing the pathways sinking from the tunnels that they dug underneath.  By the start of winter I had trapped and dispatched 37 rats and one of the staff from the nursery behind Menagerie Manor has been doing the same.  The problem has gotten out of hand to the point that I no longer trap them but set out bait stations with poison bait secured inside, out of reach of other animals.  Things seemed to have calmed with winters approach as the bait went uneaten.  Last week the Crazy Cat Lady's hissing voice sounded into our phone asking that I please come over and check out an odor in her kitchen.  Standing next to her stove I could get a whiff of something dead, she claimed it was coming from below but I told her I thought it was coming from the vent above her stove.  CCL didn't like my version as the vent would be a major job to remove.  So I asked what she thought......."rats".  The next day she had an exterminator out who quoted an outlandish fix, and the nightmare continued.  It wasn't long before CCL was blaming us for her problems on the fact that we raise chickens.  I tried to tell her that although the Ladies could be part of the problem we are diligent about cleanliness, never leave open feed containers and the ladies are only given what they can eat before roosting.  The fact is that we live in an old part of the city with old sewer lines and we have a large nursery behind us with many out buildings that they store fertilizers and other food sources.  I could see that she was about to start hissing again so thought better of reminding her that she keeps cat food in a bowl on her back porch.
So after 30+ years of raising chickens, MeMa's Ladies will be leaving Menagerie Manor for good, off to a friend's property out in the countryside where their closest neighbor is acres away.  They built a very large chicken house and run, in anticipation of our ladies arrival this coming weekend. 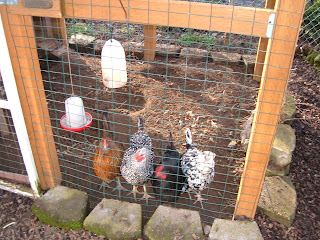 No more fresh eggs, no gentle clucking as they supervise my work in the vegetable garden.  On my return from Arizona I will clean out the building and move all my garden tools and machinery into it. The wire run in the above photo will become a shade house for hardening off trays of seedlings from the greenhouse.
I doubt the removal of MeMas ladies will get rid of the rats as the facts remain, old neighborhood, old pipes and large nursery.  I still stand firm in my belief that CCL's odor problem was coming from the vent above her stove, the vent is attached to an old chimney that has an open top on her roof..... and what do you suppose would be the obvious creature that may have possibly fallen down her chimney?????  Can you say tweet?
Posted by Doc at 5:48 PM 8 comments: 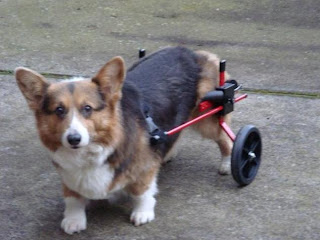 I find it a bit ironic that Betty our retired therapy dog should spend the last of her life dependent on a set of wheels but then life is full of irony.
When our veterinarian told us that Miss Betty was falling victim to Degenerative Myelopathy, a painless but  eventual completely debilitating condition, she suggested that we look into getting her wheels as she was a very healthy dog in every other aspect.  My first reaction was to shake my head no and tell her that I would rather put her to sleep than burden her with that sort of future.
The next day at my office I got on the Internet and queried dog wheelchairs and like always the world wide web opened before my eyes giving me many options.  It was mind boggling when I started reading the bit that explained how to measure your dog for a proper fit.  I was just about to close it all up when I saw K9 Carts West, their website listed them on Whidbey Island and a phone number.  I called and got hold of the owner Barbara who was a delight to talk with.  I told her about Betty and asked if it was possible for us to come to her facility and have them fit her for a cart to which she replied yes. The island can be reached by bridge at the very north end or by ferry at the south end which of course is what we did. 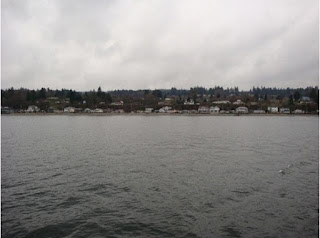 We left a day before our appointment and made reservations at the Langley Inn in the beautiful little village of Langley. 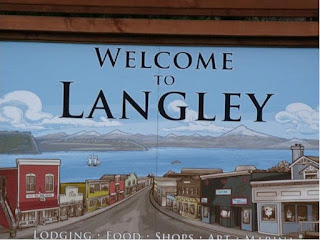 Our suite at the Inn was very nice and it also had a small kitchenette so we were able to prepare meals instead of relying on the few eateries that are available, and add to the fact that we would never leave Betty or any dog alone in a strange environment.  The next morning we drove out to K9 Carts where we were greeted by Barbara, her staff and two sweet little dachshunds.  Barbara has been perfecting these carts for a little over fifty years and is very used to dealing with all sorts of dogs and their owners. 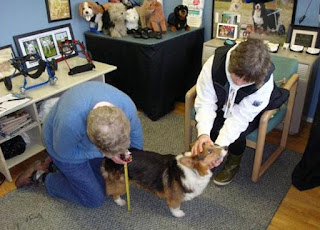 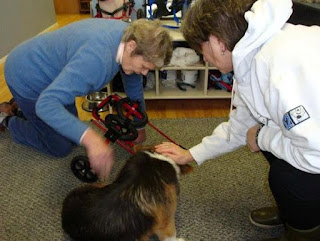 After the cart was built (20 minutes) Barbara slowly introduced Betty to the shiny red new set of wheels so that the whole process was slow and a positive experience for Betty.
On our return home we have started building her stamina back up with short walks but when we ask her if she wants walkies the excitement in her actions is rewarding in itself.  But the fact that she accepts the wheels now is a relief.
﻿﻿
In this video you can see that she is able to move both of her back legs once again with the aid of the wheels, although she balks when she rolls over the bumpy thing in the pavement and the look she gives says it all.

Regardless if this gives her a couple of months or years we feel we made the right choice as she seems a happy little Corgi again thanks to Barbara at K9 Carts West, who by the way ships world wide.

The cough is still hanging on but at least I am done with the worst of the flu.  I did get my shot before you berate me with the benefits of doing so, in fact I always do get my flu shot but this is the first in a long while that another strain of the bug knocked me down.  The worst part being the total lack of energy, life for me is too full of things that need doing.
The gardens are starting to come to life with the little snippets of spring like weather.  The bulbs are all showing through and the flowering shrubs are full of tight buds waiting for mother nature to give them the go-ahead.  Yesterday I was doing some cleaning up and found a neglected tray of leeks so I quickly planted two rows in the vegetable garden.  It does the body good to get out dig into the soil and start imagining the future rows of veggies.  I spent a good while going through my store of seeds and although it looks like there is enough I am seriously lacking so will have to take care of that little problem soon. 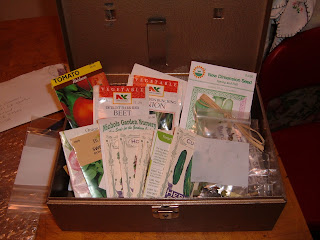 Next weekend we shall pack MeMa's little Beetle up with an overnight bag and head north  to Whidbey Island were the small town of Langley exists.  We shall be visiting "K9 Carts West" were Miss Betty shall be custom fitted with a K9 wheel chair, similar to the one in the photo below that I borrowed from their web sight. 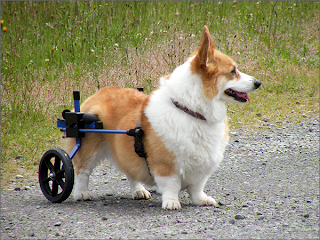 As I posted before Miss Betty is the unfortunate victim of degenerative myelopathy.  Normally a very active little Corgi she can no longer go for walks something she misses terribly.  So we are looking forward to this trip and will soon see our Betty walking and running with the rest of the dogs.
In the meanwhile we have made sure all of Miss Betty's paths are carpeted as she can no longer navigate smooth flooring of any kind.  So now every path she follows is carpeted.