This weekend was mostly spent by ourselves which was good time for me to catch up on some of the garden maintenance that has been ignored as of late. I was also able to harvest a little out of our garden despite our lack of summer this year.
Posted by Doc at 1:44 PM 3 comments:

You may have read my post about our annual neighborhood Giant Pumpkin Parade, and that this year I tossed my hat into the ring and joined the group to see who gets the award for the largest Pumpkin. The photo below was taken on August 8th when it was six inches in circumference. 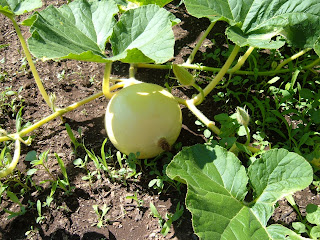 This lower shot was taken yesterday August 18th. It is just a wee bit smaller than a basketball and if you look to the upper right there is a second one growing. 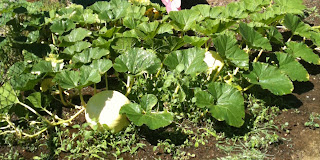 After a relaxing night in Port Angeles we were up early and headed straight over to the ferry terminal to inquire about departures.  We hit it just right for the nine o'clock ferry to Victoria, that is for first come first serve without a reservation.  We parked the car in line and then walked back into town for a nice breakfast.  It is quite amazing how quickly and orderly they load the ferry with all those cars and trucks, you would think the damn thing would not be able to stay afloat. On arriving in Victoria we discovered that we did not apply for an international package with MeMa's I-Phone so were unable to quickly find the best accomodations without reservations.  So I suggested we drive out to the Old English Inn, which is were we spent our honeymoon 37 years ago.  Our fond memories of a very quaint little inn were dashed upon our arrival.  It is now called the Old English Resort and Ann Hathaway's Cottage which was a separate tourist attraction is part of the complex and is used only as a conference center.  The once beautiful thatched roof is falling off and the gardens are run down.  The rooms that made up the original part of the Inn are now all empty and many of the windows are boarded up. We inquired and were given the last available room at $200 a night, but it was a lovely suite in one of the resorts new buildings called the Verona. We had our own private garden entrance which was very nice.
﻿﻿

Whilst we were lounging around the television happened to be on and there was a story about a family run business called The Meadery. It is a third generation family business making mead "the old fashioned way". They have miles of bee hives and though the hives are closed to the public one can just look across the field and see thousands of busy bees flying around.
﻿We sampled several of their fine mead's and a very nice honey wine that has won several prestigious awards, and the one that we purchased to bring home with us.
A trip to Victoria would not be complete without a visit to Butchart Garden so on the day of our departure we set aside a few hours to stroll through and have lunch in the conservatory / restaurant.
﻿
﻿

During our stay in Victoria we purchased a scrumptious sack of lychee fruit at a China Town vendor. We tried our best to eat all the fruit before arriving at the U.S. customs. There were only six left and I had my fill of them when we pulled off at the side of the road, I told MeMa to toss the rest but she thought she might be able to eat them while we waited our turn at the gates. When the nice young lady officer asked us to declare any fruit or veggies MeMa just held up the last remaining lychees and asked if she would be so kind as to deposit them in the trash for us that we were quite through with them. The next thing we knew we had an orange sticker on our car and directed to the inspection station. We were asked to vacate the vehicle, fill out a long form and answer some questions while our vehicle was searched.  When we finished and were granted permission to enter the state line MeMa turned and said to me "I guess next time we lie".  To which I replied "It's a good thing they didn't find those primrose starts in the bag under the seat".  And with that the dynamic pair of senior rebels in their Volkswagen Beetle headed off seeking new adventures.
Our last night on the road we stayed at a wonderful Casino north of Seattle, wined and dined in a luxurious room....... 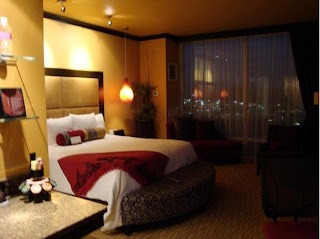 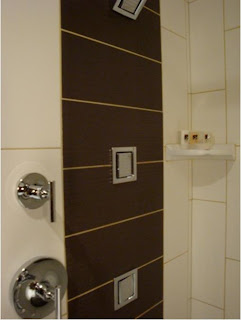 ........on the eighth floor because this rebel does not do well with height. The shower was to die for with three heads, I really must have one of those at Menagerie Manor.
It was so nice I immediately had one and then another in the morning.....hey, cleanliness is next to Godliness.﻿
﻿ 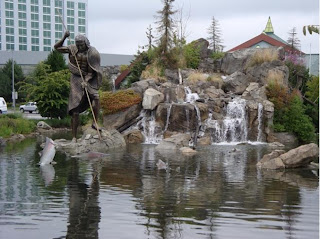 The only way to get my dear wife to do absolutely nothing so that her broken wrist will heal, is to sit her in the passenger seat while I drive and just keep going.  So with no plans made just a destination in mind(Victoria B.C.), we hit the road.  We chose not to make reservations anywhere so if something struck our fancy we could spend as much time doing whatever we wished.  I wanted to avoid the Seattle traffic so our first stop was lunch at the Historic Quinault Lodge.  We used to spend a few days here every year for our anniversary, but lunch on the deck was a very nice way to spend a couple of hours before getting back into the car.
We drove a few more hours along the coast before calling it a day.  We stopped in a small town called Moclips at a nice little Motel that overlooked the beach and had a wonderful sunset.
The next morning we decided to just cruise through the Quinault Reservation Land stopping to see what ever looked interesting.  We discovered a small fish hatchery that was open to the public.


We made it into Port Angeles that evening and stayed at the Red Lion because it was along the water front. The extra cost for a water front room was worth it.  So while MeMa watched one of her favorite shows I put my feet up poured a nice glass of my single malt scotch and read my latest edition of Orchid Digest that I saved just for the trip.
﻿
﻿