I have mentioned in previous posts that MeMa has two box turtles in her care. Ruby and Elmo are both rescues who are housed in the laundry room. Ruby has been aged at 100 + and Elmo is just over 50. Last year we had central air put in and during the process they told us we would lose the heat vent in the laundry room because the equipment would block it. At the time we thought nothing of it because the laundry room has always been extremely warm and assumed since the furnace was in there it would remain warm even with the loss of the vent........wrong! It is not anything close to uncomfortable, quite the opposite actually. But evidently MeMa's charges think just the opposite and have tried unsuccessfully to go into hibernation. Today we have put an end to their feeble attempts to sleep until June by purchasing a "turtle heater". Our local hardware store had a very limited supply of one and we just were not prepared to spend nearly $100.00 on a heater thats sole purpose was to keep two lazy turtles awake for a couple of more months,  sooooooooo we did the unthinkable and purchased the same heater from a " big box " store for $40.00 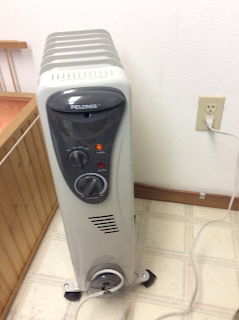 So with this purchase we should start seeing a flurry of activity in the laundry room turtle population, woohoo! 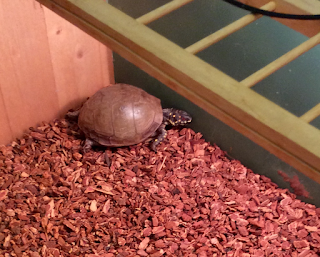 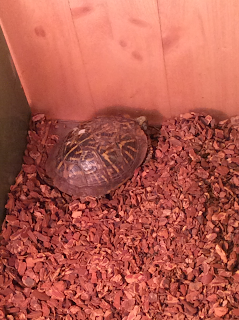 Breathing Through Changes and Welcoming Spring

There have been many times that I have been frustrated with fellow bloggers who seem to just drop off planet earth. I wonder why it's so difficult not to just post something, anything for their followers to stay connected. Well I am assuming that I have a follower or two that feels the same about the fact that my last post was December 28th, even if those followers are family.

Hello, I am still alive.........yes........I just pinched myself and it hurts. I retired in October and I have come to the conclusion that I rather like it. Although it took some adjustments to reach that conclusion. MeMa is still working two and a half days so it leaves me with rather a lot of time on my own. My recent and much detested checkup has shown that my bladder cancer has returned, not the thing you want to hear your doctor say. To say the least I was crushed and could see the same in MeMa's expression as she stood next to the doctor while he navigated the camera through my nether regions and quietly explained what they were looking at. Three more tumors and a suspicious area that will be biopsied when they remove the tumors on March 28th. I have to admit that I became quite depressed over the next week, but I am quite convinced that I am in the best possible hands. Life has been very good to me and I have no intentions of leaving it now, so I quickly got off the pity wagon and faced the day. After all, spring has sprung and there are jobs to be done. I am right where I have always wanted to be, retired and working in the garden. 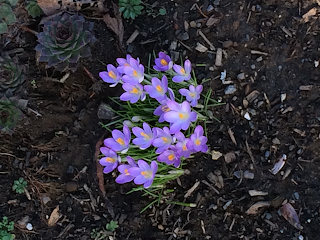 This old gardener has a stock of projects to busy himself and an heir or two for their lifetime.

First on the agenda I catalogued the contents of the pantry and freezers so when I do the weekly shopping I am not over purchasing. One of my new loves is cooking. I have always enjoyed eating, but now find that most of the enjoyment of food is the creation and hearing my wife saying she really likes what has been set before her. Forty two years she has planned, shopped for and prepared every meal set before her family. Fortunately for myself over all those years MeMa has amassed a very large number of recipes. Unlike his wife who can gather items from the pantry and prepare a delicious meal without a recipe, this old gardener can cook but only with a recipe to follow to the letter.

The latest project in the garden is almost finished, it required a couple of  trips to the masonry shop for cement blocks. What used to be the kitchen garden is now be three raised beds for MeMa's dahlias. Each bed has a graveled two foot wide walkway so she will be able to keep her feet clean while she picks flowers 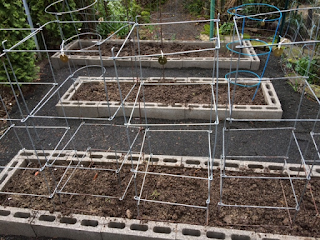 I use tomato cages to keep each plant in control and each cage is tagged with a numbered brass tag which corresponds with a page in my record book. Then in the fall I give away any that do not perform well and plant a new one in its place. 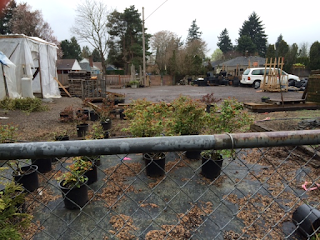 Since the 50's the property behind ours has been nursery, which takes up a five block parcel of land. The block directly behind our house has always been a utility area closed to the customers so it has always been very quiet. Economics has brought about change, the property has been sold and houses are to be built on four of the five blocks of land leaving the last for the retail portion of the nursery.
There has always been that worry in some small dark little niche of our brains, but it's something that we would scoff at and ignore. Our house is 100 years old this year, we are the second owners having purchased it in 1976. We have had terrible, good and great neighbors on either side of us so might as well stick around and see what the future holds at the back fence. With the coming of spring I have already started dressing up the window boxes and filling pots.

Spring is bursting in the garden, mostly on time but with our unseasonably warm winter everything is bumped up a bit. The ancient star magnolia is the first to bloom early. Usually it follows the spring bulbs but this year its snow white blossoms are ahead of the bulbs. 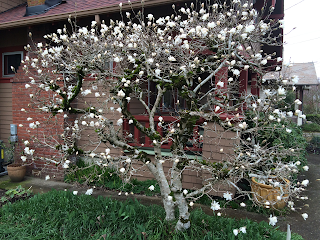 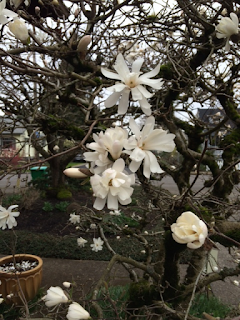