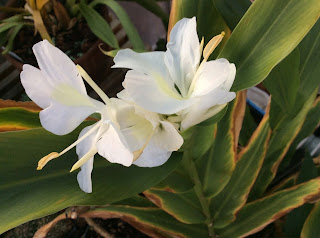 Four weeks ago I was going to post this photo of "the miracle plant" in full bloom in my greenhouse, in actuality it is a white ginger plant. Our friends Jan and Brian Barlow brought one of those little shriveled up tubers in a little plastic bag that are sold by the thousands to tourists in Hawaii. They usually don't grow and get tossed in the end but as they always do, they gave it too me to grow for them and it did wonderful. A short while after that Brian and Jan were the victims of a drunk driver that landed both of them in the hospital with life threatening injuries. Miracles happen and both recovered for the most part. Brian came home first and the next day or so showed up at our door with what was once the white ginger plant but now just a dried up dead pile of nothing. Brian handed me the pot and said they needed one more miracle. I took it to the greenhouse and said a few prayers as I worked on the plant. About three weeks later a small little green shoot peeked out of the soil and another a few days later. When I dropped the plant back off at the Barlows I said, "Here is your miracle plant."Although it once again resides in my greenhouse it is still that "one more miracle" and the fragrance is amazing.
That was four weeks ago and I am just now posting for the first time since then. Life has been a bit of a whirlwind since I announced my retirement. My sister flew down to help my twin brother who unknown to me was having some major health issues and had to be hospitalized. After being released she drove him and his two Corgi's from Phoenix Arizona to Portland to spend some time close to family. After a week here I drove him and the dogs back to Phoenix and remained with him for another week before flying home to Portland 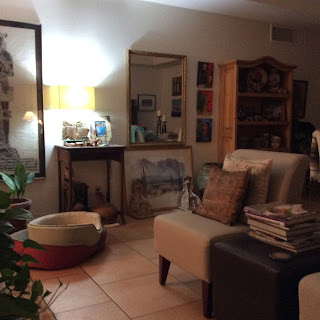 My brother's home is very large and is an eclectic museum that I love to spend time just wondering about looking at all the many treasures. He has a gift for decorating that rivals the best.....including  Martha Stewart.
After a week there, I flew back to Portland for a week and then MeMa, myself and Jan and Brian Barlow flew back to Phoenix to stay with my brother again. This however was a planned trip which included attending a football game at the University of Arizona where our Oregon State Beavers unfortunately played poorly in the scorching heat, losing to the Arizona Wildcats 7 to 44. 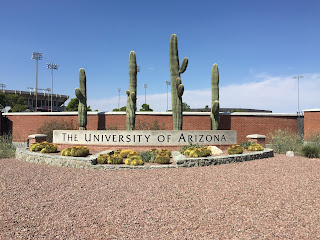 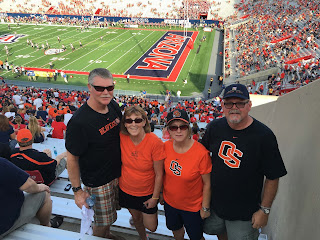 After the loss of the game we decided to drown our sorrows at the local casino were we had a nice dinner and actually walked out with a sizable win on the slots. 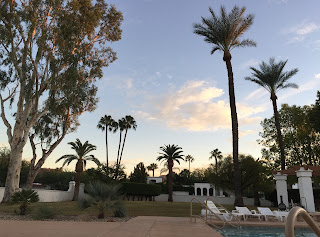 During the heat of the day when it was just too hot to do anything else we suffered quietly floating in the pool. 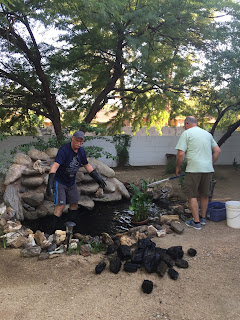 While Mema and Jan gave the house a thorough cleaning Brian and I completely emptied the pond which had gone stagnate. The previous owner had filled the bottom of the pond with lava rock which made it impossible to scoop debris from the overhanging mesquite trees. Over the years the muck had turned black and was about six inches deep and destroyed the pump. I purchased a new pump as a thank you gift for putting up with four crazy seniors. 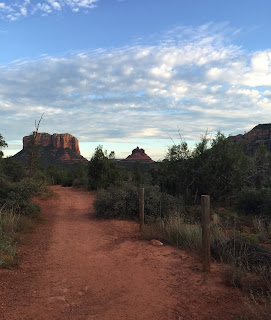 The rest of the trip was very enjoyable making day trips to Sedona and Cave Creek. My brother who used to have a catering business is a wonderful chef and made sure we all dined like royals. 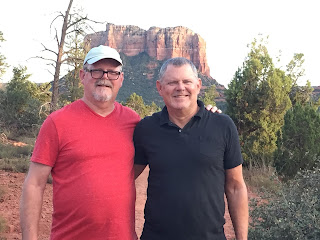 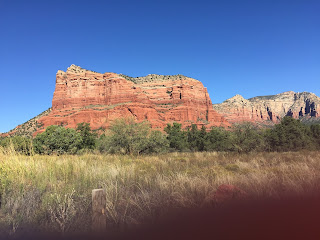 Retire?
Going to retire?
Retired?
Yep, that will be me....I guess.
October 27th
37 years and one day.
It went by quickly.
The 37 years.
One day?
I chose that because I wanted to be sure the records read a full 37 years.
Anal?
Probably.
My job is record keeping.
Or the job I have been doing that has now been divvied up to five people, yes I said five.
What am I doing now that five other people are doing my old job?
Sitting at my desk looking at all the stuff I have to take home on October 27th.
Lots of stuff.
37 years and one day worth of crap.....stuff. 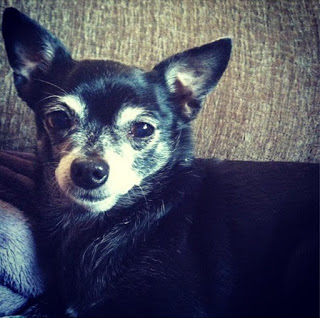 We sadly said goodbye to one of the dearest little dogs that came into our lives.
Ninja or Ninjie as our granddaughter Lucy called her, had a wonderful life with our son Ian and daughter-in-law Jill. Ninja came into our lives when she attended Oregon State University with Jill and Ian, she loved the early years on campus attending class out of view inside Ian's jacket. 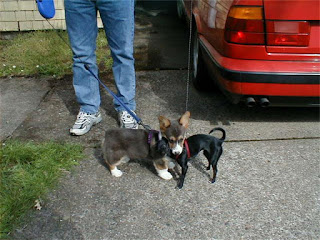 While she attended college was when we introduced our Betty to her and they became immediate friends. Many a time Ninja would come home on a break and spend time at Menagerie Manor playing with Betty and the other animals. She loved playing chase with Max the cat who was so gentle even being at least twice her size. 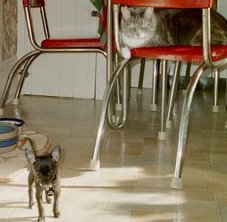 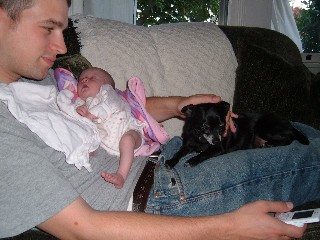 A few years later life as Ninja knew it changed, nap time with her boy suddenly included another little soul that soon won her heart, Taeya our first granddaughter. 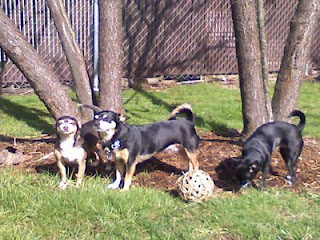 Among her life changes was when Ninjas mother QP and sister Rhonda came back into her life. 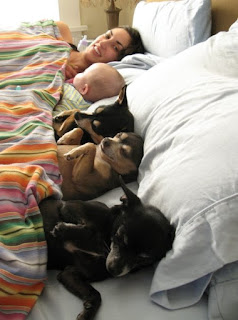 That bed was getting darn full. 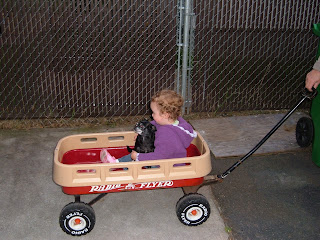 There were trips to the park and Ninja loved to ride in the wagon with Taeya. 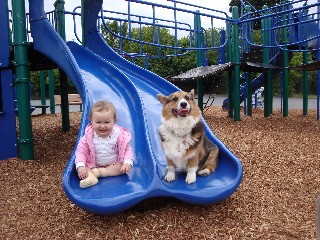 Sometimes she would be joined by our Betty
Ninja accepted changes with grace, she knew no matter who shared snuggle time with her boy she always had her spot. 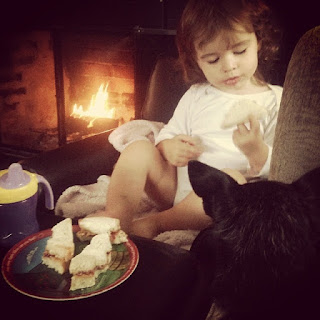 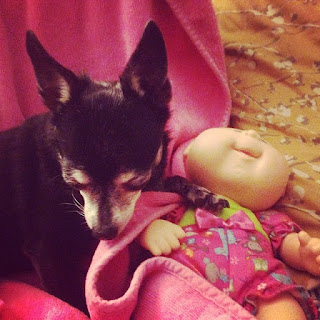 Babysitting Hector while Lucy was busy
October 7th
I have been corrected, the dolly is Hector's sister Isabelle 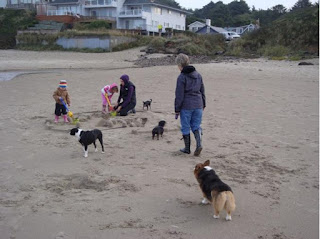 Ninja loved our family stays at the beach 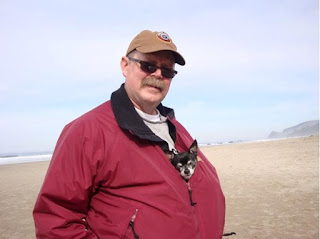 I will miss my little jacket buddy
Posted by Doc at 10:29 AM 6 comments: