I would give MeMa a big hug for doing Christmas up so fine but my back is still out and that sort of activity is risky for this old fart.  So well done dear!
﻿﻿﻿ 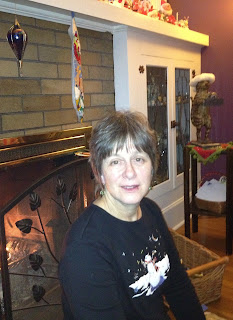 Besides doing all the gift purchasing she did all the wrapping (a talent I have never mastered), very tastefully decorated the thirteen rooms at Menagerie Manor, shopped for and cooked Christmas dinner for all the family.  All this accomplished along with trivial interruptions like breaking her ankle, babysitting grandkids with stomach flu, coming down with said flu and back on her feet and running the next day.  Only to get a call that her father was in emergency with a nasty bump on his head after falling out of his chair.  He is ok and back at the care facility but MeMa had a battle to get him there and after she insisted on an investigation, she found out that the a staff member had left him unattended in his wheelchair and the poor guy tried to get himself back into bed. 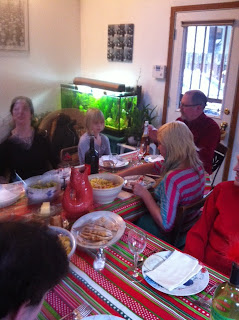 The garden room was the ideal site for such a group, so that meant we had to empty the room in order to place the tables. 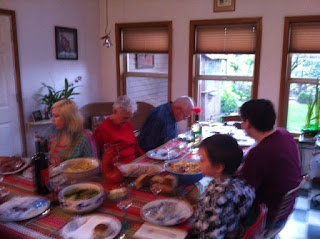 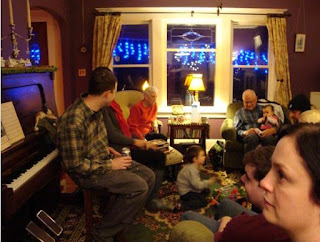 The meal was finished and we all retired to the living room..... 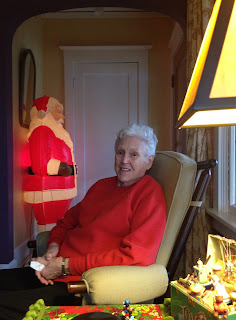 ......when my mother blew the whistle on the bright jolly old elf's appearance. 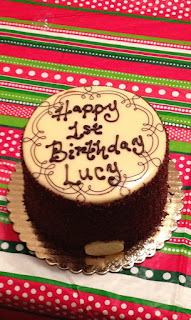 Christmas gifts out of the way it was time to celebrate "Little Terrorist #3", Lucy's 1st Birthday.


The bright red upright piano MeMa found for her was a complete hit....enjoy the concert. 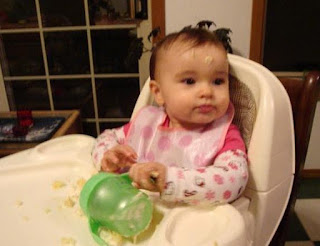 Lucy thought the cake was delicous to eat and wear.
So after a quick bath and jammie's, birthday girl joined the rest of the grandkids for a goofy picture to end a most enjoyable night and to wish you a safe and wonderful New Year coming. 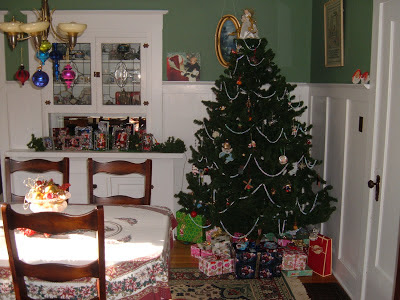 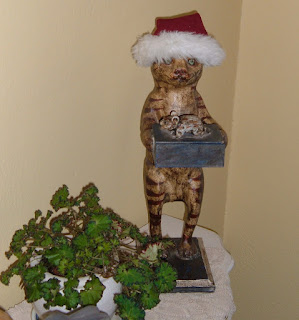 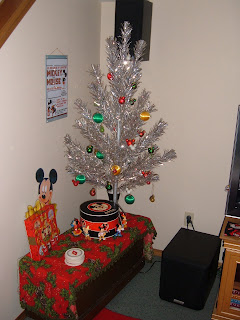 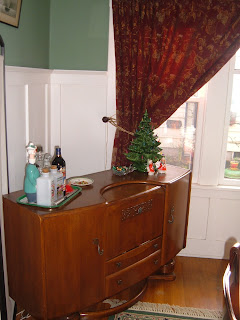 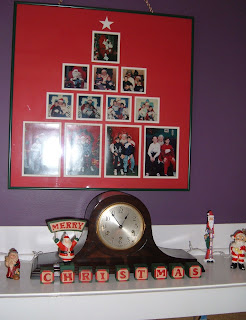 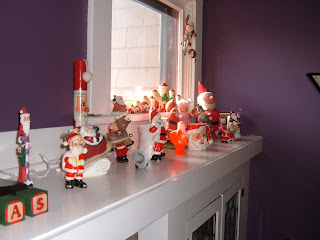 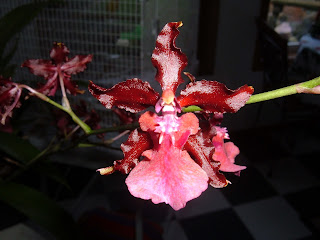 Barn Of The Month

I could tell when I pulled in the drive that MeMa was not home yet as the house was dark.  I looked at my watch to see that it was past the time she would normally be home.  Just as I layed my work bag down my cell phone started to ring and when I answered there was her voice telling me she was headed to Clackamas Town Center to check on a few gifts for the Little Terrorists.  Not a problem I told her, I was going to change and head out to the garden to do some clean-up.  An hour at least passed when my phone went off again, MeMa’s voice, only this time she gave a nervous chuckle and said it will be a bit before she returns home as she was barricaded in one of the Mall stores with other shoppers because there had been a shooting and the Mall was on lock down.  She said she was in the back of the store behind shelves and out of sight, and not to worry.  I turned the TV on and there was an aerial shot of the mall, the reporter talking about two deaths and possibly more.  They had a triage tent set up in the parking lot and it was so hard to see the scene because of all the ambulance and police cars had their lights flashing.  The nearby freeway ramps had been shut down and hundreds of police swarmed the Mall immediately when they arrived, a new policy to prevent more deaths of innocent people.  In the past they approached slowly in order to access the situation better, but that process often meant more deaths.  My pulse raced but I felt in my heart that my lovely wife was safe.  About another hour MeMa called and said the police told them if they are able to get to their cars they would like them to leave so that was when she called, as she was headed to her car and leave the Mall.  I stayed on the phone with her until she was clearing the Mall and headed home.  Two innocent people died that night a third rushed to the hospital near death, the gunman dead by his own hand before he could kill any more innocent shoppers.  That evening I happily went about our normal night time routines and thought how lucky we are to be safe in our home together and prayed a silent prayer for the families of the victims who are going through their private hell this close to Christmas.
At work  that Friday December 14th was just a typical Friday, I busied myself getting work done so that I might get done early because Little Terrorist #1 Taeya was going to sing in her school Christmas performance and I didn’t want to be late.  I dashed down to the mail room to get my daily pile and as I returned to my office I was asked if I had heard the news of Sandy Hook Elementary School?  The news was the blackest most evil thing I had heard.  Innocent children the youngest only a little older than my own granddaughter, the news hit me like I had been punched, knocking the wind out of me.  All these little children dead, shot as many as eleven times at close range.  The motive??? Who knows, there is no motive for this senseless act of violence against innocent children.  I arrived at Taeya's school early and waited in the car listening to the ongoing investigation that was to give no answers.  I gathered myself together so that when I greeted my granddaughter I was nothing but her smiling Poppi. 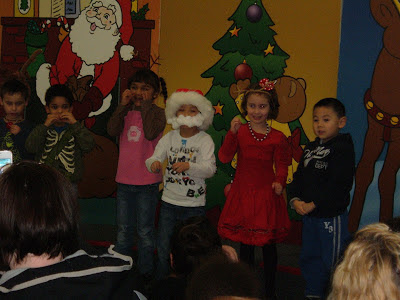 The sparkle and magic of the performance was so contagious that the evil of the world was soon lost, pushed away from thought by the singing of little voices.

When Are You Going to Retire?

Nothing to say about the garden and no photos of what is in bloom as with this dreary weather it is hard to make anything outdoors look cheery.  No cute photos of the creatures of Menagerie Manor.   Just a trip to my long time dentist for my six month checkup and cleaning.   Dr. H has been our family dentist since the very early 70’s.  Now I’m getting old but that makes him really old.  After my hygienist removes her hands and equipment from my gawb and our long one sided conversation about house painting has come to an end, Dr. H comes in for the final inspection.   He stops at the door, a very meticulous white haired gentleman, tall in stature and always a gentle smile.  “Well now I thought you would have been retired by now."  I turn to him with an incredulous look on my face and say in return “You're one to talk."   He chuckles and takes a seat alongside me as he performs the final inspection.  As he is gently prodding around I think why should he retire?  Here is a man who has made his mark on life, runs a very successful business with a large staff that has been with him for many years and who basically do most of the work.  All he has to do is show up for these final inspections and his day is done.  Oh sure there is the little surgeries here and there, but mostly it is those final inspections and then back to his plush office until duty calls again.  MaryKate my hygienist leans in to tell me, “Always clean your paint brushes and they will be with you till the end!"  I look at her with puzzled look until I remember her, er our one sided conversation. “Thank you.  I will go and do that straight away." I smile and walk out the door knowing I don’t have any paint brushes but I do have the marvelous Lee’s, the ninjas of the paint world who do all my painting for me.  On my drive I remember Dr. H’s question as to my retirement and I think of him sitting in his plush office with his gentle smile.  Why should we retire or give up something that “fits” into our lives? If it makes us happy, keeps us motivated and doesn’t keep us from doing familial duties or hamper our health.  Why should I or Dr. H retire?  Tomorrow I will drive to my office sit down at my desk and eventually one of our many employees will walk in needing this or that and they will ask “Doc….when are you going to retire?", and I will smile and think of Dr. H. 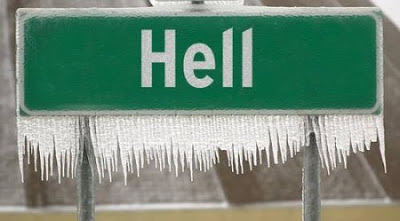 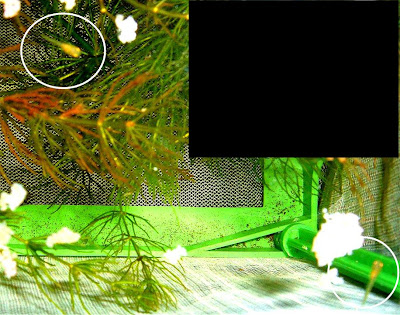 In my recent post titled "Priority Mail" I documented the arrival of my true strain Endler Guppies.  A rare little fish that has become extinct in the wild and nearly impossible to find in the aquarium trade.  Last night I was greeted by six new little faces at feeding time.  One of two pregnant females gave live birth at some point during the day and the second one is due soon.  I have circled two of the six and blacked out the glare of the flash.  Sorry, I never professed to be a photographer.

We now have sixteen and two exhausted mums.
Posted by Doc at 2:38 PM 6 comments: