When one is responsible for keeping up with a large and high maintenance garden one really must get off his arse and get out there and get things done. So that is what I have been doing for the last few days of unexpected sunshine.
And I have put Thanksgiving away and am sorting through Christmas lights and decorations.  Every year I tell myself that I will only put out a few lights but when I pull the boxes out of the garage attic the little boy comes out in me and before I know it I am putting them all up again.  It is getting quite harrowing to decorate the Monkey Puzzle tree and I have the punctured fingers to show for it.  The "Crazy Cat Lady" hissed from her front porch that I really should have someone hold that ladder to which I declined any of her involvement, only to have a gust of wind blow just as I stepped away and the damn thing came crashing down.  C.C.L. hissed and growled something and retreated into her dark house. 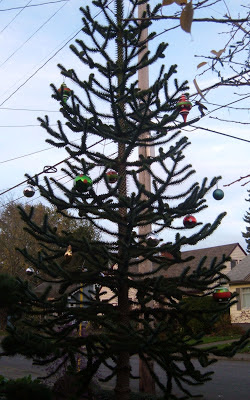 After that I cleaned up a few flowerbeds raking leaves and debris and depositing it into my composters. There is still a bit of color to be found in the gardens. 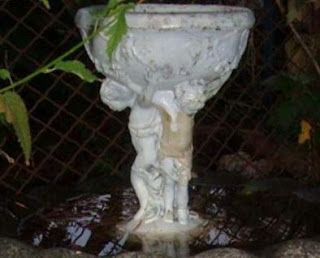 Picked this little gem up at a flea market. I plan on pressure washing the blue paint off.

The Innocence of Youth 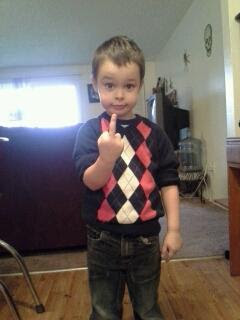 Four year old "Little Terrorist #2" Brooklyn is not imparting any philosophies of life or ill thoughts toward the camera man.  He was simply showing his latest boo boo to daddy who could not resist a photo on his cell phone.
Posted by Doc at 11:49 AM 4 comments:

A while back MeMa brought this single wooden drawer home knowing that her husband has a thing for cool boxes and drawers. 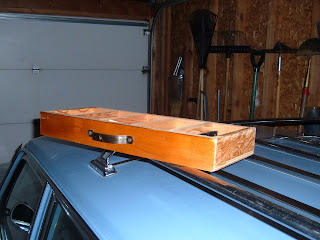 It was left on the school's loading dock just outside the library windows when she noticed it, and knowing that this is where things are placed prior to being dropped into the trash dumpster she placed the drawer into her car and sent me a photo.  When I got home I carried the drawer out to my tool shop.  It has all these lovely dividers which will work great for little odds and ends that I never know what to do with.
About three days later I received another picture message from MeMa titled "recognize the missing drawer"? 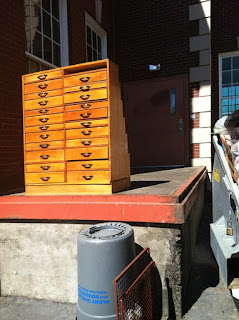 I immediately text back, "Are we in trouble?" To which her response was, "No, they just were slower getting this monster out of the building, it's headed for the trash."  I quickly closed up the office and while running to my van I text that I was on my way and that I wanted the "monster".  Well built is the only way to describe this piece of furniture as now days items such as these are made out of that imitation wood in order to make them in mass quantities and made so they can be easily moved. Problem being they are also made to easily get rid of in this throw away society that we live in.  After arriving I immediately started making room for it in the van, while MeMa and the school custodian stood shaking their heads telling me it was too heavy to lift.  I told them one way or the other it was coming home to my tool shop.  I started pulling drawers out and loading them up on the back seat when MeMa said she would go sweet talk the other custodians into helping me load the box.  It took myself and three others to lift it into the back and even then I had to drive the short way home with it hanging out the back of the van about a foot.  After getting it home I placed my appliance mover at the back of the van then shoved with all my might and dropped the beast directly in place.  I then strapped it on and moved it into place were my old roll around tool box currently sat. 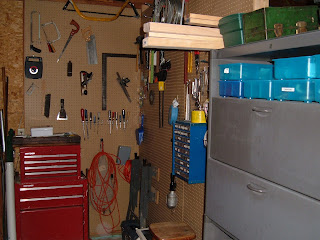 The back of the box is angled allowing each drawer to be a little deeper in length than the drawer above it.  Some drawers are also very shallow while others are deep making it an excellent tool box.  There are twenty four drawers and each one has from two to four wood dividers giving me plenty of room for tools and other instruments that are usually stuffed in the three tool boxes and the roll around that are now empty and have found new homes. 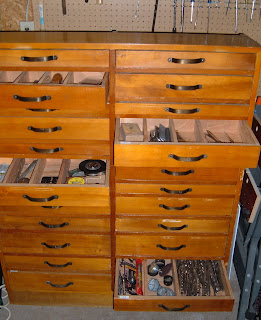 My shop is complete with this addition, everything is organized and has its place.  I guess I have no excuse for not getting some of the projects done that clutter my work bench.
Posted by Doc at 6:53 PM 4 comments:

A Day In The Garden

It has been a mix of rain and sunshine this past weekend, unseasonably warm which found me out in the garden planting next summers garlic crop.  I put in three rows of Hood River garlic and four cloves of Elephant Garlic for roasting. 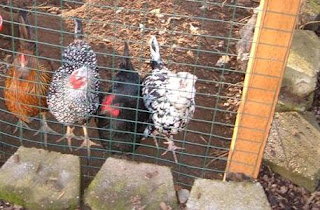 MeMa's Ladies all stood at the chicken yard fence watching me plant each and every clove, probably thinking that they would go back and dig out all of them as soon as I let them out to free range.  I did a major water change on the pond and then dumped a twenty pound bag of salt into the mix.  After losing one of our favorite and oldest Koi last winter I am not going to take any more chances.  I cleaned all the rain gutters and cut the grass down low as with this warm start to winter it was starting to look like elephant grass.  The orchid house is bursting at the seams with winter storage plants and I have started all of my grandfathers geranium cuttings setting two flats on the potting bench for next summer. Orchid number 21 Cattaleya "Tangerine Imp" has bloomed for the second time this year. 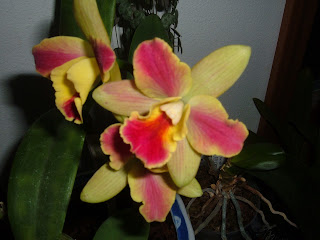 And blooming for about the fourth time this year is Orchid number 44, Vanda "Murphy's Gold" 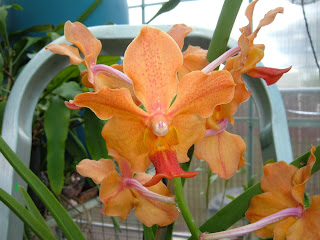 As community spirit goes.......well lets just say it was high with squealing children, barking dogs and laughing adults.  Five pm was the witching hour on 62nd Avenue.  All the side streets were soon filled with droves of residents all walking down to neighbor Ann Storrs large courtyard, the gathering place for marchers in the parade. 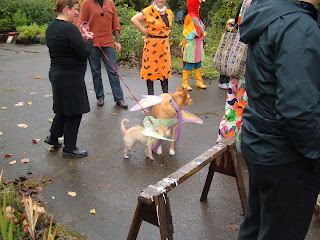 Most everyone wore a costume of some sort including this butterfly duo. 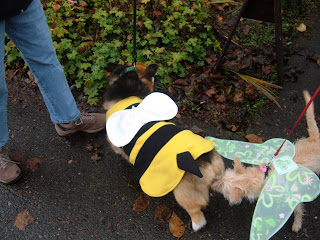 A bit of brown nosing when the Royals showed up. 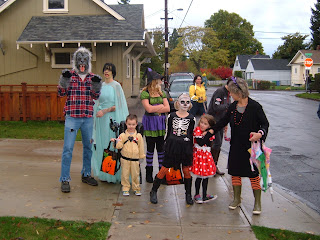 It took some bribes but we got our family to pose before heading to Ann's. 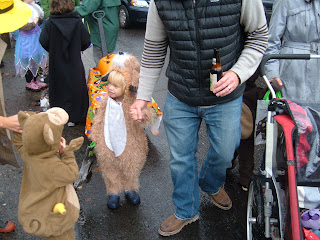 This years Pumpkin was hidden away in Ann's studio, so as the drive and courtyard in front filled with marchers as the behemoth made its unveiling. 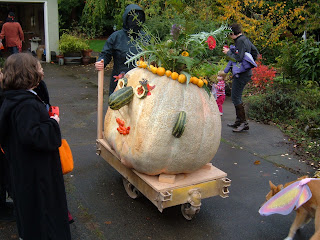 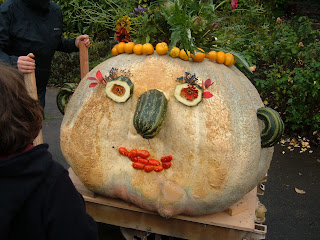 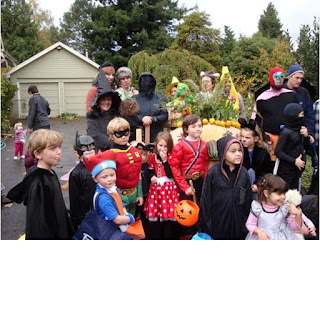 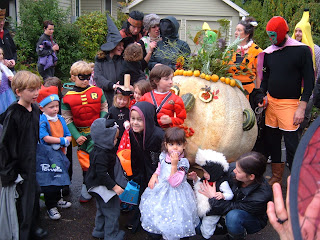 First a Kodak moment and then the march got underway. 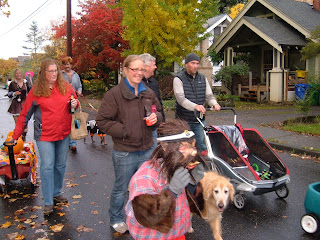 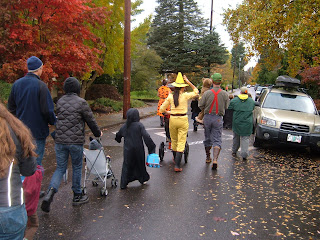 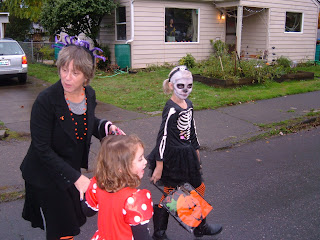 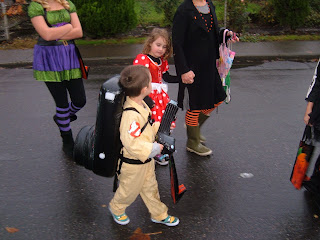 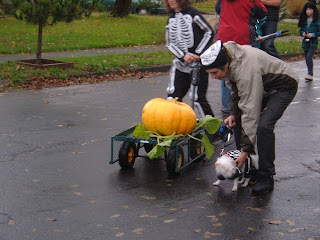 There are other pumpkins in the parade but none compared to the giant.

After the parade and before the Little Terrorists were turned loose for Tricks-or-Treats we all headed back to Menagerie Manor for a meal of MeMa's homemade clam chowder and big loaves of her delicious rustic bread.  The weather held out for the children and not a drop of rain until the lights were turned out. 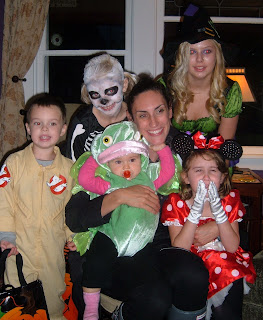 One more picture and then it was time for two old poops to turn in for the night.