Usually when I am away from the blogging world I at least stay up on all the happenings in all of your lives but this time I just was gone plain and simple. So I apologize for that and hope that this post will explain.
﻿Christmas at Menagerie Manor started out a bit sad for MeMa and myself as we are dealing with our eldest son and his wife being separated and the confusion that is causing for our grandson Brooklyn "Little Terrorist #2".  Separation and divorce is never a good thing when there are children involved. MeMa and I try to make home life at Menagerie Manor as solid and unchanging as possible for him, all the while tying not to interfere in the way that our son is dealing with things.  But it is hard many times not to comment or give opinions when we see Brooklyn acting out in frustration over the simplest situations.  Enough said on that matter!
At around midnight Christmas Eve this old man was attempting to put a leg into his pajamas when the phone rang,  MeMa yelled that it was our youngest son Ian. I  quickly tossed my pajamas and grabbed my trousers running while putting them back on.  Ian and our daughter-in-law were headed to the hospital as the contractions were very close together. We actually got to the hospital before them by about fifteen minutes and when they pulled into emergency I was waiting at the door with a wheel chair for the expectant mother. T hey had pre-registered on-line (amazing) so we were whisked on through and in a wink Jill was made as comfortable as possible in a very large, well outfitted birthing room.  The staff were so nice and being early Christmas morning they were all excited at the prospect of the first Christmas baby being born at their hospital.  Lucy Ann Chambers "Little Terrorist #3" was born a little after four in the morning on Christmas Day. 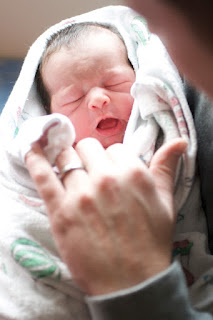 MeMa is a bit old fashioned so I spent my time in the waiting room with Jill's mother as she does not deal well with such things as blood.  Along with Daddy and Jill's older sister Kelly, MeMa was by Jill's side during the birth and she was the one to cut the umbilical cord and washed Lucy's hair before Daddy gave her a sponge bath as she wriggled and squirmed.  They then swaddled her and gave her to Mommy to be nursed and made comfortable.
So I would like to remind myself once again of what has become my credo and is actually quoted in the "About Me" to the side of my posts.......


"Life is too short to wake up with regrets.

So love the people who treat you right.
Forget about the one's who don't.
Believe everything happens for a reason.
If you get a chance, take it.
If it changes your life, let it.
Nobody said life would be easy, they just promised it would most likely be worth it. "