As charitable organizations go, Goodwill has had some bad press mostly due to the high prices they charge for items that they receive free from donations and the very high salaries managers are paid. Years ago our eldest son told us about his lucrative trips to the Goodwill Bins. We until that day were only aware of the stores, which we had gone to if we needed an inexpensive vase to give away with a bouquet of flowers. Our son would look for items that he would then sell on EBay. It is a large warehouse that is filled with long rows of bins on wheels, each bin is waist high and about twenty feet long and filled with .......junk. Until one makes it a treasure. Pushing a shopping cart one loads items in and when finished pays by the pound. Every once in a while that treasure just lands in your hands. On a recent trip I found  such a treasure........

The carved bone was the bit that caught my eye from under the pile of junk on top of it. And as soon as I brought it to the surface, three other hands tried to claim it as well. With the look of death I shot round, sole ownership was restored.

There obviously is a fare amount of wear and tear on it. I perused a few auction sites and found one with the starting price of £250. GB 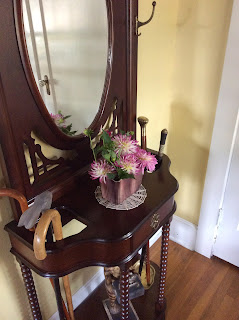 But even if I don't sell, it looks rather nice with my other walking sticks.