Rain and Memories of a Great Dog

Mother Nature has returned Oregon weather back to what it should be at this time of year, cold and wet.  The early part of the month we all enjoyed summer-like weather with all the windows open and the ceiling fans twirling, welcome back to reality.  I had to turn the heater back on in the greenhouse as the nights are just too cold for the orchids and all the seed trays.  While I was in there, I discovered orchid #14 had bloomed.
﻿ 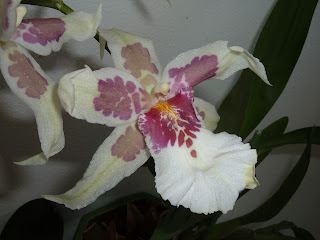 Odontoglossum "Tahoma Glacier Wilma" or as I call it,  Meg's orchid.  Meg was our Australian Shepherd for 14 years.  When she passed friends gave us the orchid in sympathy for our loss.

Some dogs come into your life and leave such an impression that one can never forget them.  Meg was two years old when friends asked us to dog sit her for the summer months while they visited family in Italy.  She fit right in from the start and adored our dogs and our two sons.  She was intelligent to the point that if she was told once she would never forget.  We were at a park and as some children ran by she went to give chase with a devilish look in her eye, I called her back and reprimanded her for leaving my side and she never did it again.  She watched over our two young sons and always stood between them and any stranger that happened to walk by, never a bark or growl only a dutiful glare until they passed and then she would sit or lay down next to the boys as they played.
As summer's end neared, Meg's owner Kathy came to collect her much to our dismay.  But there was something odd going on, Kathy was quiet and seemed troubled and it showed in Meg as well.  The happy dog look left and was replaced by a down trodden expression that left us all wondering what was going on.  The next morning Kathy rang us up and asked if we could take Meg back to which we responded with an enthusiastic yes.  When she arrived back at the Manor she said Meg wouldn't eat and just laid by the door whining the entire night, we looked surprised because the minute she entered back into the house she was running through every room of the house licking our boys and barking and playing with our dogs.  Meg never left after that day, there are some changes in life that are just meant to be and Kathy and the rest of us recognized Megs desire to make a change in our lives as well as her own.

The daycare that Taeya and Lucy attend put on a very nice singing performance for Mothers Day on the Thursday before Mothers Day weekend.

Sunday morning we slept in until 6:30.  I stumbled out to the kitchen and slipped Miss Betty into her wheels while the other two dogs ran in circles by the back door with pained looks on their faces.  So before I had to clean puddles up I let them all out for their morning constitutions.  I then came back in and turned the coffee on, fed the grumbling Maxwell who demands a teaspoon of meat for his breakfast, opened the draperies, collected the paper from the front porch, uncovered MeMa's canaries, filled the three dogs dishes.  That done, I then go to the back door and open it only to be half knocked silly by stampeding dogs all hungry for their morning kibbles.  I wade through them and go to the greenhouse to open vents, grab a tin of food and feed the Koi fish who nearly jump out of the pond trying to get the food before it hits the water.  That bit done I return to the kitchen after unstrapping Miss Betty's wheels and give the dogs their food.  I stand back wondering if there was anything forgotten, the coffee machine making that slow dripping noise when I realize my bladder is screaming for help as I am standing there, bare feet on cold floor.  A few minutes later I am back in the kitchen doing the last part of my morning ritual and that is putting creamer and sugar in MeMa's cup, thoughts of my lovely wife going through my head on her special day.  Well no, she didn't exactly get breakfast in bed......no, she didn't have breakfast at one of the swanky restaurants that fill our city.  Well yes, she cooked breakfast for six adults and five children but I at least poured her coffee.  I know it sounds bad but it was a great time with our son's and their families.  MeMa baked a large egg and sausage thingy in the oven, our eldest son Nathan and his family brought two dozen doughnuts and I poured mimosas for the adults and the little terrorists had orange juice.  After a nice visit Nathan and his family went to visit my parents before heading out of town to the in laws for dinner.  Our youngest son Ian asked if we would be interested in going to the Sunday Parkways bike ride, we of course said we would love to. So after a bit of a clean-up......... 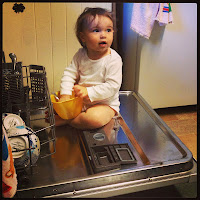 ........Lucy filled the dishwasher.
So with bikes loaded we met  in the parking lot of Lents Park the start of the ride.  I was amazed at all the volunteers and city police that manned every intersection on the seven mile bike ride. We traveled through neighborhoods that we have never been in.  The entire route was blocked off and they did a very good job with signage and tents set up along the way with volunteers to answer any questions.  At every park there were booths set up selling food, drinks and vendors selling things we didn't really need.  Each stop had fun things for children to do as well.  It was such a pleasant ride and no time limit so we rested at some of the parks before heading on to the next.

I have seen the little buggers flitting around as I worked through the rhododendrons that tower at the back fence line.  I really have not given them much thought as I asumed they were just harmless white fly, well harmless outside the greenhouse anyway.

Stephanitis pyrioides or azalea lace bug not to be confused with the Lace Wing bug which happens to be a natural predator of the lace bug...ahhhhhg!  My beautiful old rhododendrons, my babies, started from three inch cuttings by this old gardener back in the 70's.  About a month ago I noticed the leaf surface of rhodie Catabiense album showing some white speckels and without closer look just assumed it needed some fertilizer.

While sitting and having my morning coffee I turned to the last page of the Home and Garden section of the Saturday newspaper to find an entire page devoted to this ugly little pest.  Smack in the middle of the article was a large photo of the damage they can do to a rhododendron or azalea.  It looked as though the photographer had taken the shot right in my garden.  I read the entire article right down to the author's recomendation to dig out any infected plants and re-plant with anything other than a rhododendron.  The thought of digging out these beautiful bones of the garden sickened me.  I got on the computer and delved into the wonderful world of Google and one article said that the nimphs can be disloged by a blast of water to the underside of the leaves.  So as soon as I was in my garden clothes I dragged the hose out and gave each plant a good blast of water.  Chemical treatment was also mentioned but this had the adverse effect of killing benefitial insects as well.
I fear the once graceful giant in the photo's above is not long for this world, my biggest fear is that the same fate will meet the rest of these.

In August of 1994 we spent two weeks on a family vacation in Washington D.C. taking our two sons to all the museums and historical sights including the White House.  One afternoon we all went to George Washington's famous home, Mt. Vernon.  After touring the home and garden I was pleased to discover that the local women's garden club had taken hundreds of cuttings from the now ancient boxwoods that Martha Washington had planted around her kitchen garden.  They were selling packages of four rooted cuttings as a fund raiser for the upkeep of the gardens.  I purchased them and they shipped them home to us and two survived.  My two historical boxwoods are planted on either side of the brick walkway leading into vegetable and picking gardens which I thought was the appropriate site for them.  They had been in this new location for a year when I started noticing the yellowing leaves on the lower right side of both shrubs.  I sprayed for spider mights thinking this would take care of it, but it only got worse.  That is when I discovered the true culprit.....Popeye, the "Boston Terrier From Hell", or at least his urine is.  That stuff would probably remove varnish.  I now follow him into the garden and hose down the boxwoods every time he annoints them.  Dogs have no respect for history.
Posted by Doc at 8:48 PM 11 comments: