Since the beginning of our married life MeMa and I have filled it with the love of dogs and although there have also been many many other creatures that have shared our life as well, dogs, I would have to say are our greatest love.  All of them with different but lovable personalities that will have a permanent place in our hearts.  However once in a while we are blessed and I say truly blessed with a creature that graces our lives and love with a whole hearted love and devotion that surpasses all expectations.  Fourteen years ago our Australian Shepherd, Meg had a stroke but with quick action from our wonderful veterinarian she slowly pulled through but we could tell that age was gaining ground on her.  One day CCL the crazy cat lady asked us if we would go with her to pick out a Corgi puppy, she wanted a male and the breeder was driving in from southern Oregon with several puppies and adult dogs to choose from.  Turned out that there was only one male puppy and one little female with the most gorgeous hazel eyes that looked straight into our hearts.  CCL remained focused on the male which was her first choice and quite happily went home with Bentley.  MeMa and I went home by ourselves quietly thinking but not saying what was in our hearts.  When we got into the house Meg and Otto greeted us as usual and at that point words flowed out of our mouths both of us regretting not taking home that wonderful little Corgi puppy.  MeMa called CCL and and got the number of the breeder, but when she called they had already left for home.  Fortunately she said that they needed to drop some friends off at the Portland airport in a couple of days and would bring the pup with them.

Although Meg turned her nose up at this new addition to the family it was not long before they became fast friends and we both agree that Betty brought renewed strength to Megs aging body and was probably the reason she lived another two years before the light went out of her eyes. 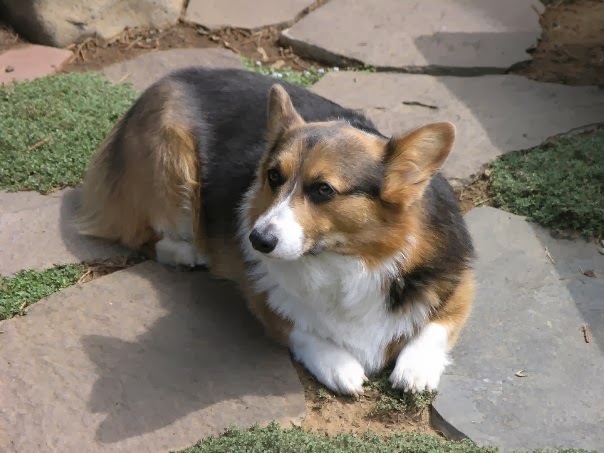 Betty had an intelligent dignity about her that was calming, never showing any confrontational behavior.  She would turn her head and look straight into MeMas eyes when another dog approached.  Acutely tuned into MeMa's reactions, when she was happy Betty was overjoyed dancing at her feet, when she was upset Betty would quietly shuffle her body up to MeMa offering her sympathy.  MeMa and Betty went through therapy dog training, successfully graduating the very intense training and going on to minister to an autistic child at a local children's home.


﻿
Always game for adventure she loved to travel with us whether it being a trip to the beach, the family cabin or her last trip to my twin brothers home in Phoenix Arizona.  She was happiest just being with her humans.  Even when they forced her into posing for the traditional family Christmas card photo's 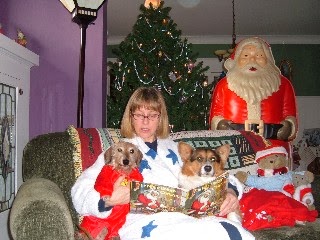 Reading "Twas The Night Before Christmas" 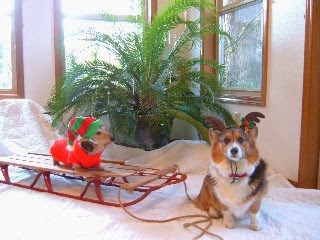 Santa's helper Otto being pulled by Betty the reindeer 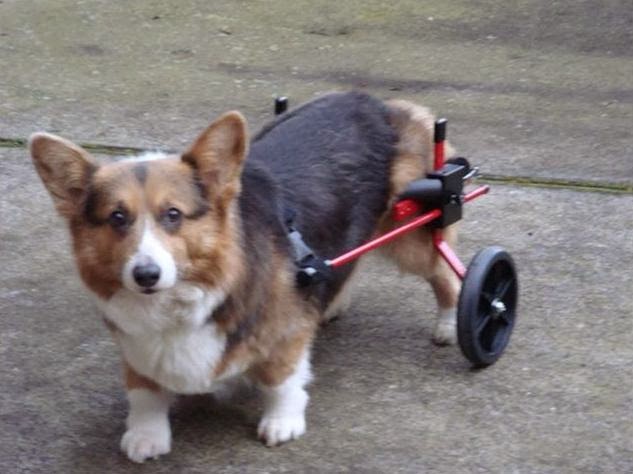 As you know from my previous post "Betty's Wheels" February 15, 2013 Betty developed degenerative myolapathy and we were told that she would probably only live another few months.  We were determined to help her have quality of life until the end.  We traveled to Whidbey Island in Washington state and had a set of custom wheels built to support her hind legs which at that time where losing strength and motor skills.  I firmly believe that Betty could sense her humans need for her to fight this battle with the dignity and cheerfulness she always showed.  Betty lived longer than most victims of D.M. surprising us as well as her veterinarian who told us when she became incontinent it would be the end of her battle.  Although we kept her on absorbent pads in the last few months she never became completely incontinent, it was her front legs that gave out next or perhaps it was the fading light in her eyes that told us she needed to start her last journey.  That last journey that would take her out of our lives but never our hearts.

Margaret MacKenzie will be 98 this year.  Margaret and her late husband Bill lived accross the street from us.  They were there for every big event in our young lives.  We laughed and cried together like family.  When Bill died while at work of a massive heart attack his last words, "Tell Margaret I love her." Margaret loved her roses; she and Bill planted them together, she would tend the garden in her old straw hat, Bills old shirt, an apron and carrying her tin bucket from plant to plant trimming and weeding as she went. 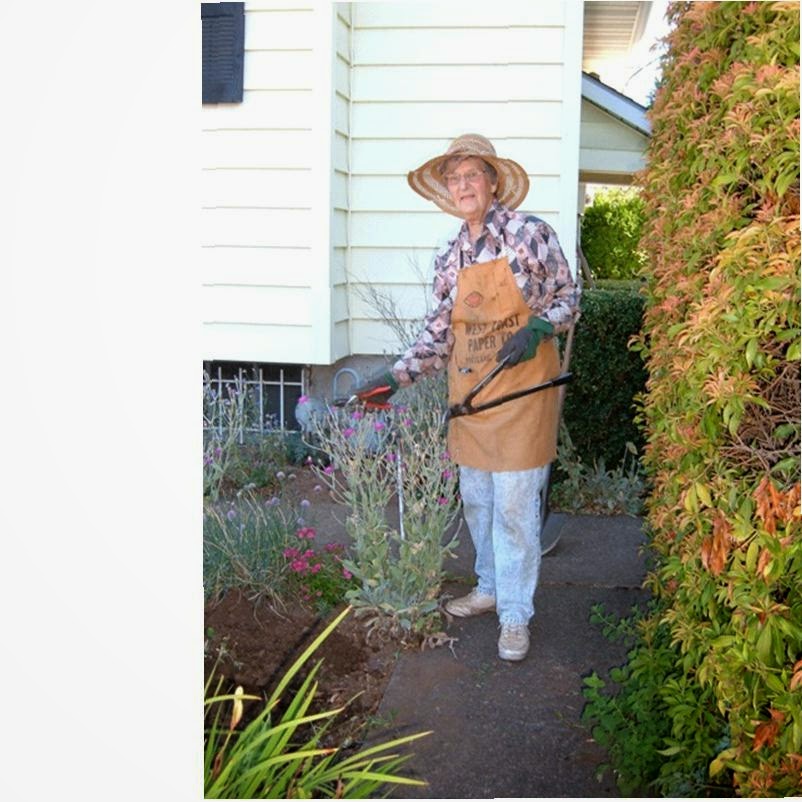 I was never big on roses in the early years but Margaret convinced me to try a few.  I soon became enthused and added more to my garden.  Margaret showed me how and when to prune them properly, I was hooked.  I joined the rose society and every month Margaret and I would attend the meetings together,  go to rose events and we both trophied at the rose shows.  She was my mentor. 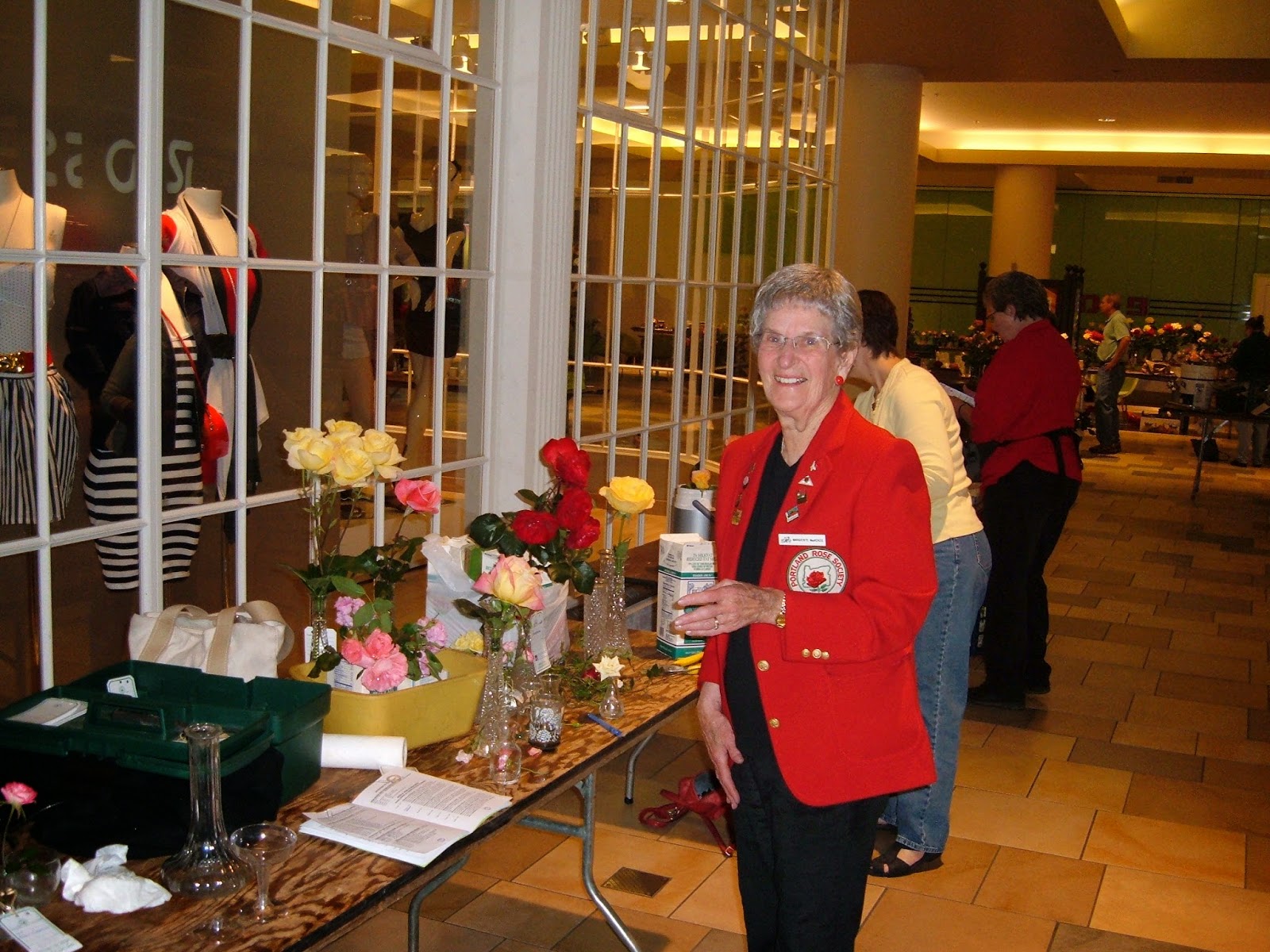 I drove because earlier that year she decided she was getting too old to drive so she sold her car.  A couple years later, she decided it was time to move into a retirement home and sold her little house with all those roses.  Her new apartment is smaller, easily managed and the housekeeping is done for her.  She had to leave most of her things behind, but as she said, "It's only stuff", and she took all she needed.  She told us if there was anything we wanted to just take it.  I picked up a hanging basket which held a plant that had belonged to her mother many years ago.  I asked if she wanted to take it to her new apartment but she said, "You take it, I just don't have room for it." I told her that I would put it in the greenhouse and make a smaller cutting of it for her to have.  She told me that her mother had gone back to Switzerland to visit family in the 50's and she took a little cutting of this plant and hid it in her purse bringing it back home in a little perfume bottle.  Margaret rummaged around and found the bottle, handing it to me saying, "You take this, it's part of it's history".  I did start some cuttings and nursed the original plant back to health and was surprised to have it bloom the most beautiful flowers that next year.  When we took Margaret her new little plant it was also in full bloom, she told us she didn't even know it flowered.  Out in the greenhouse Margaret Mackenzie's mothers contraband plant from Switzerland sits on a little pedestal and next to it sits a little glass perfume bottle.....part of it's history. 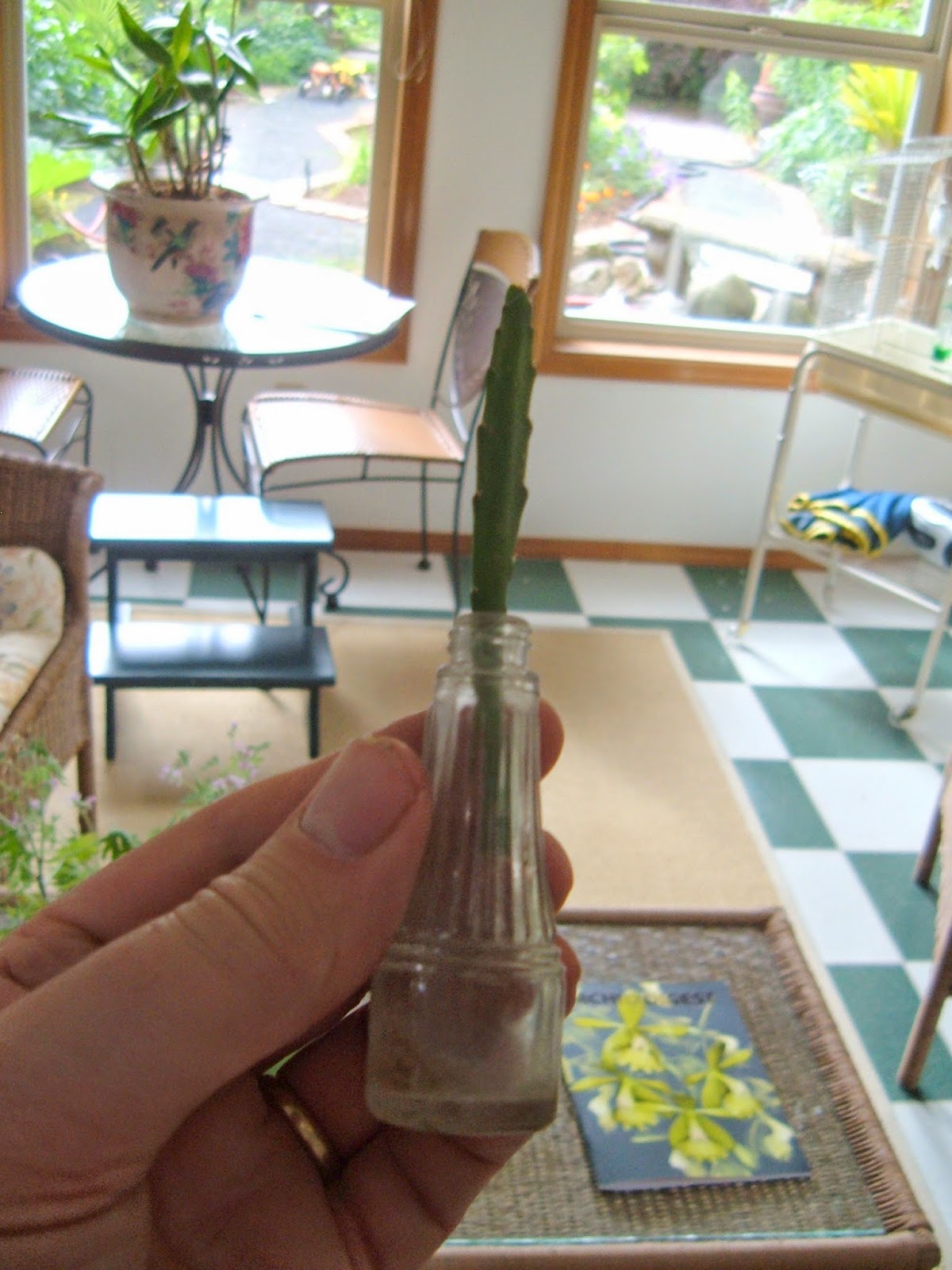 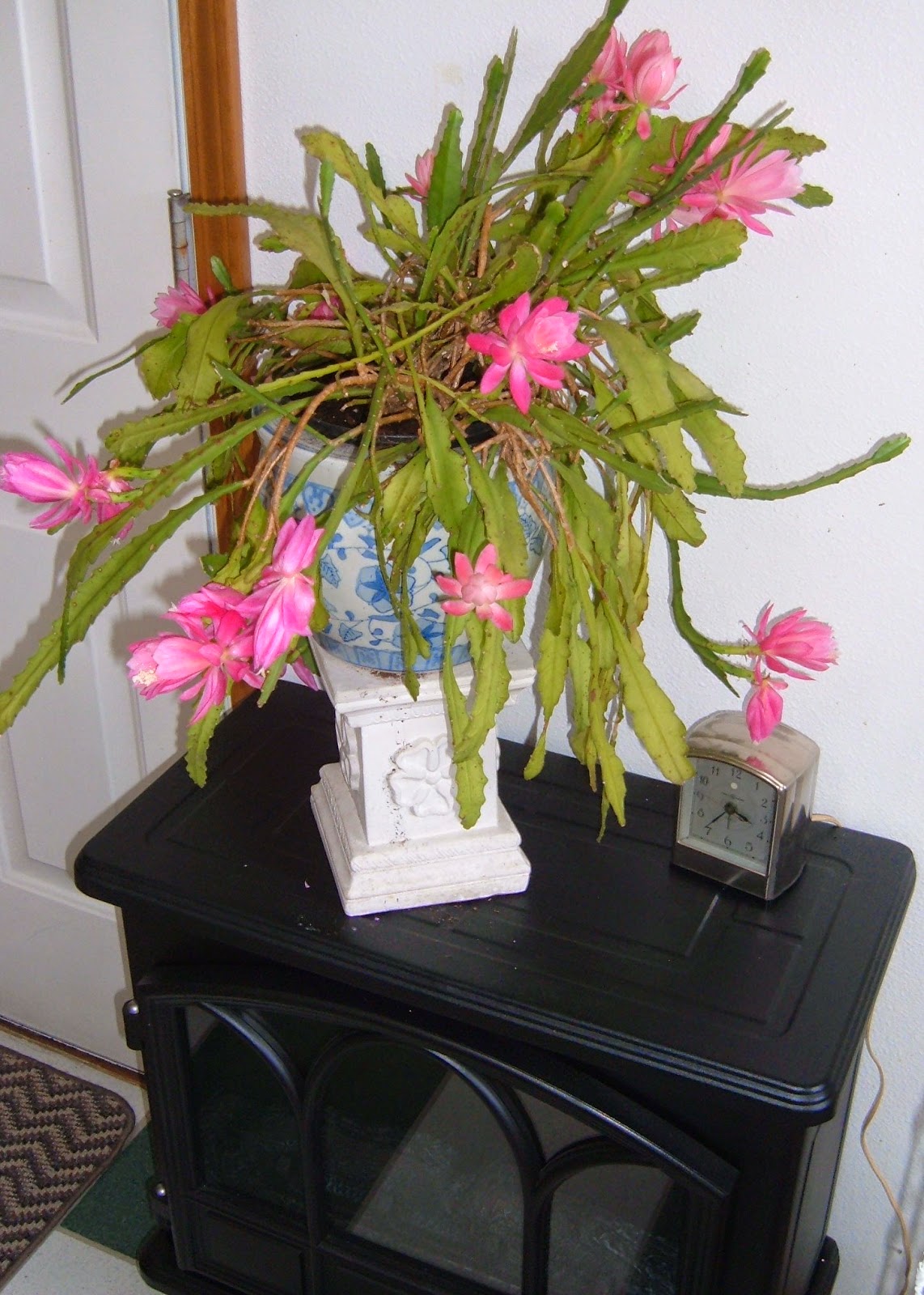 ﻿
Margaret's old tin bucket sits in the greenhouse as well collecting any trimmings while I work. 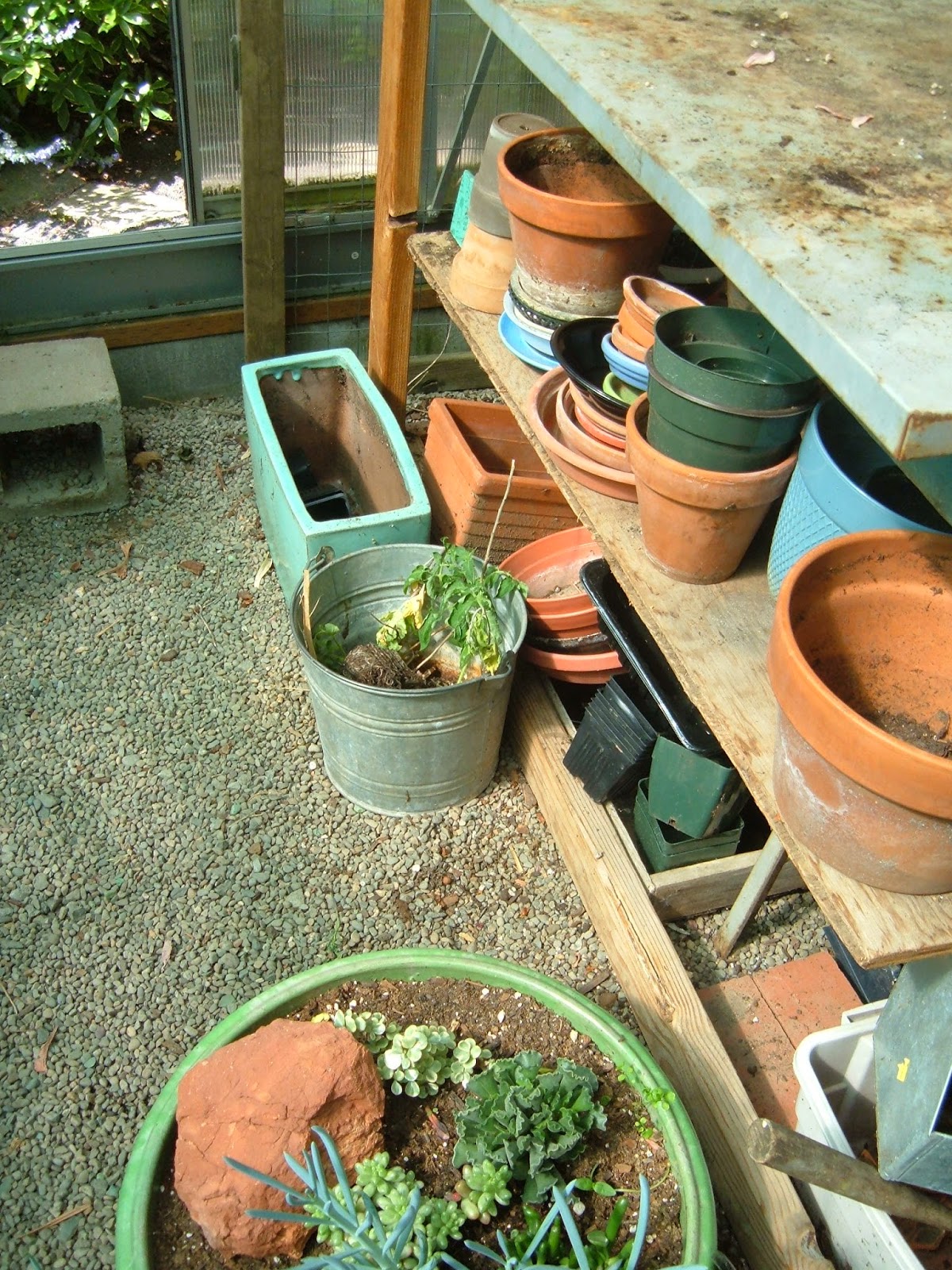 The last two trips to the family cabin we thought we would be washed off the mountain. During one such visit I woke to a slight trembling which left me with a very uncomfortable rest of the night.  I had visions of the mountain side sliding down into the lake with us never to be seen again.  This trip however the weather was perfect, so we took advantage of it and spent the entire three days working like crazy giving the old place a cleaning. 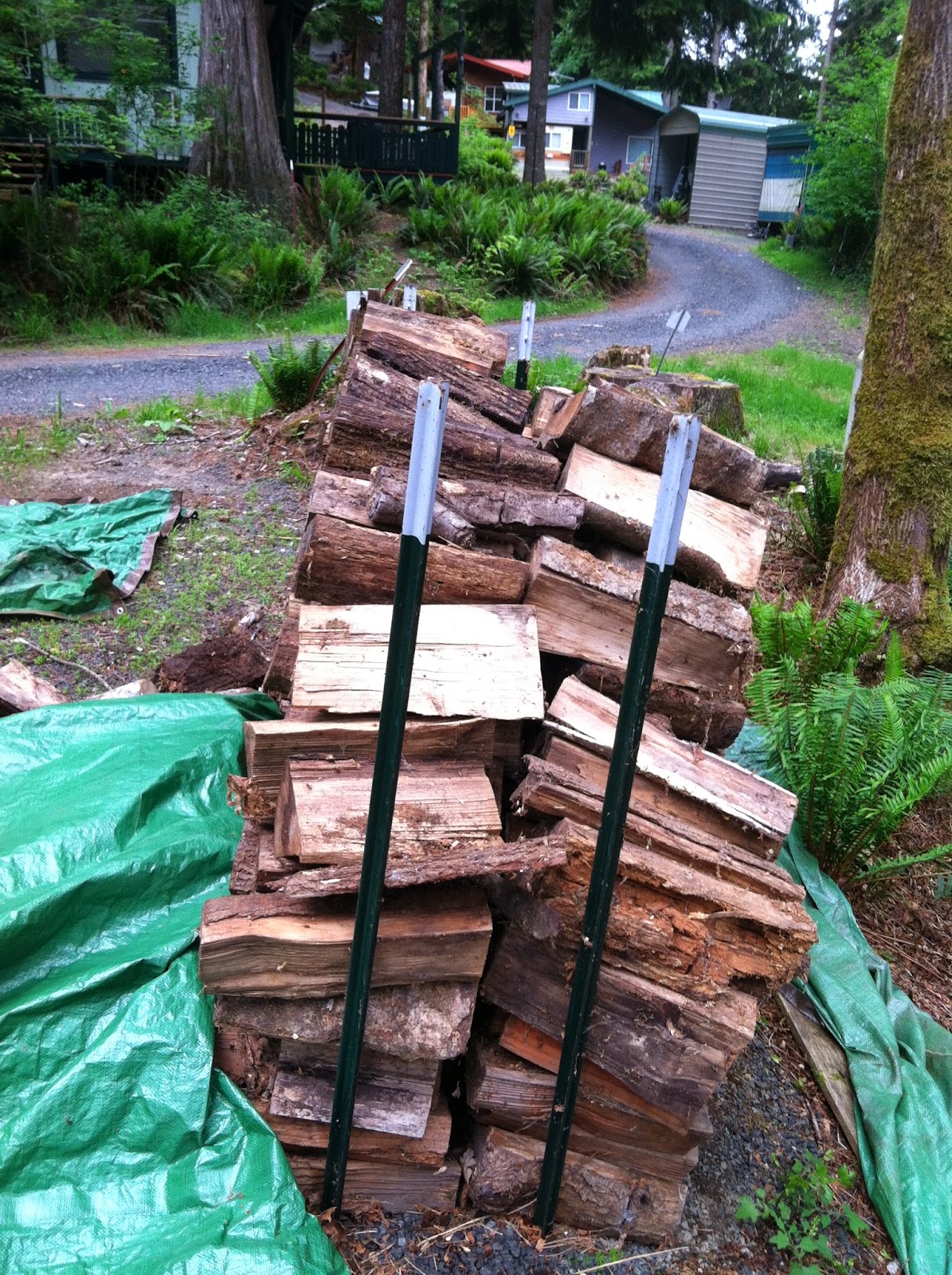 First on the agenda was the wood pile which was quickly becoming our neighbors pile.  The extremely wet winter and spring washed the bank away to the point that the pile was threatening to tumble away. 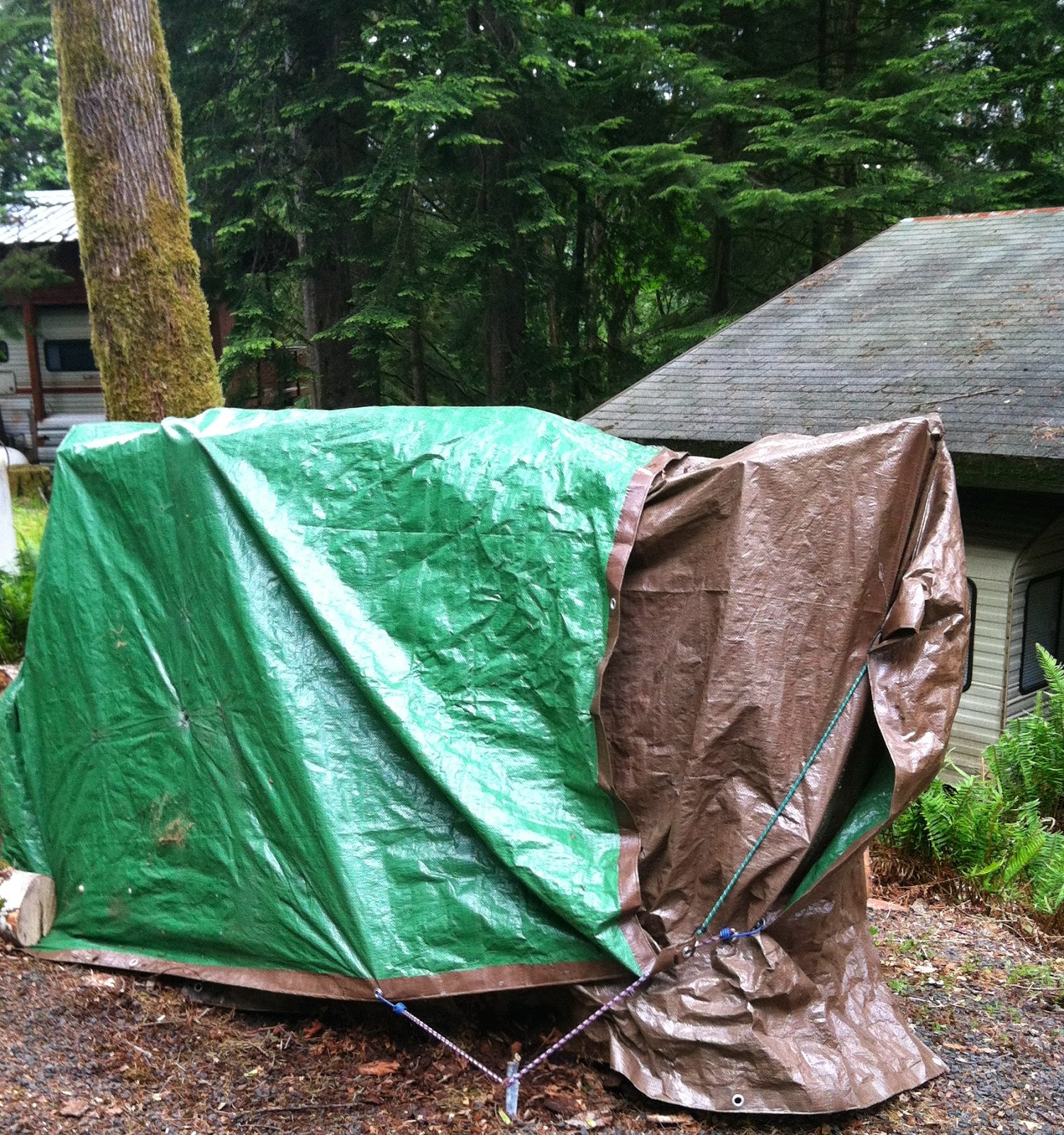 So we re-stacked the whole mess and covered over once again with tarps. 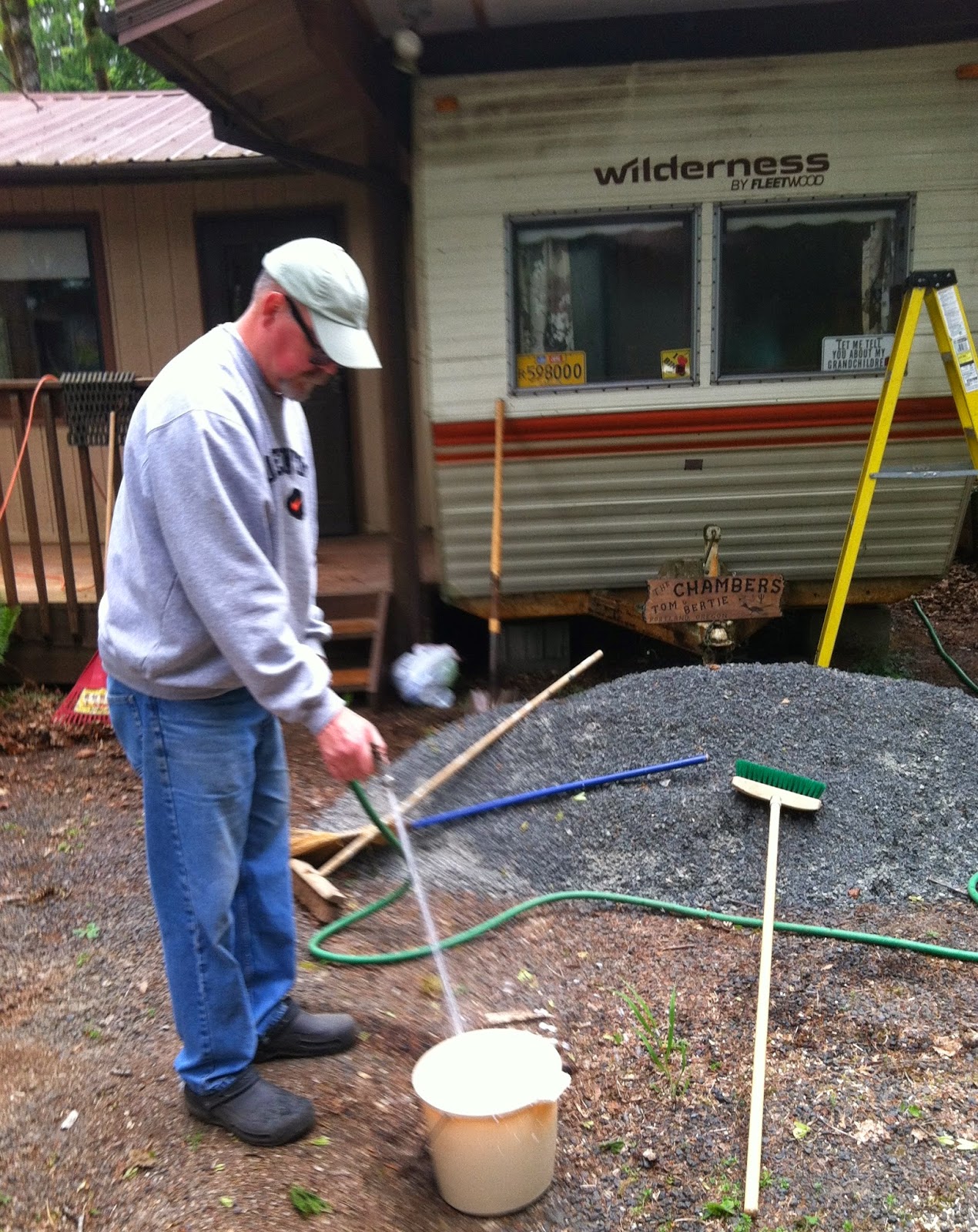 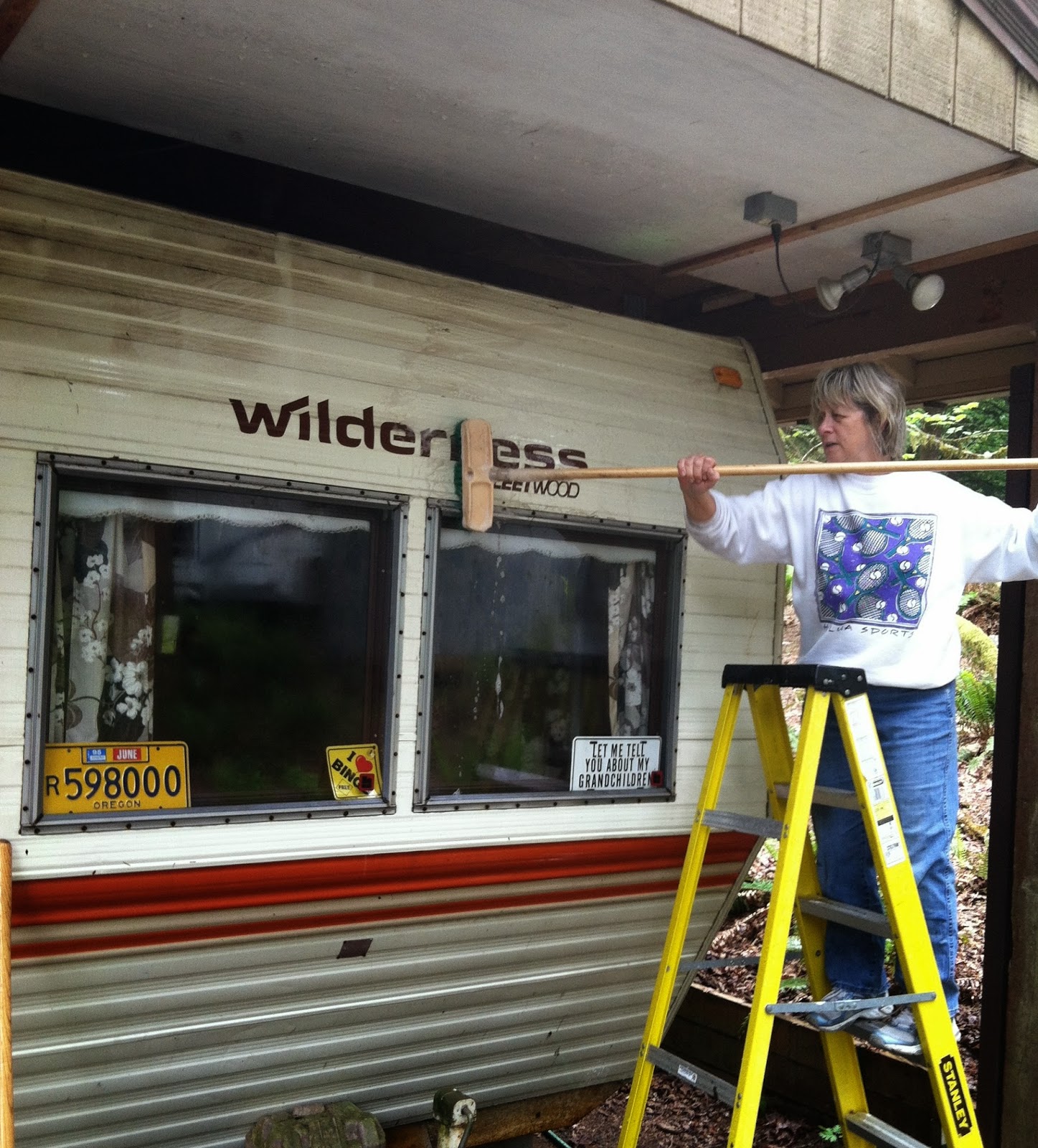 While MeMa played around on the ladder scrubbing a years worth of dirt and grime from the trailer. 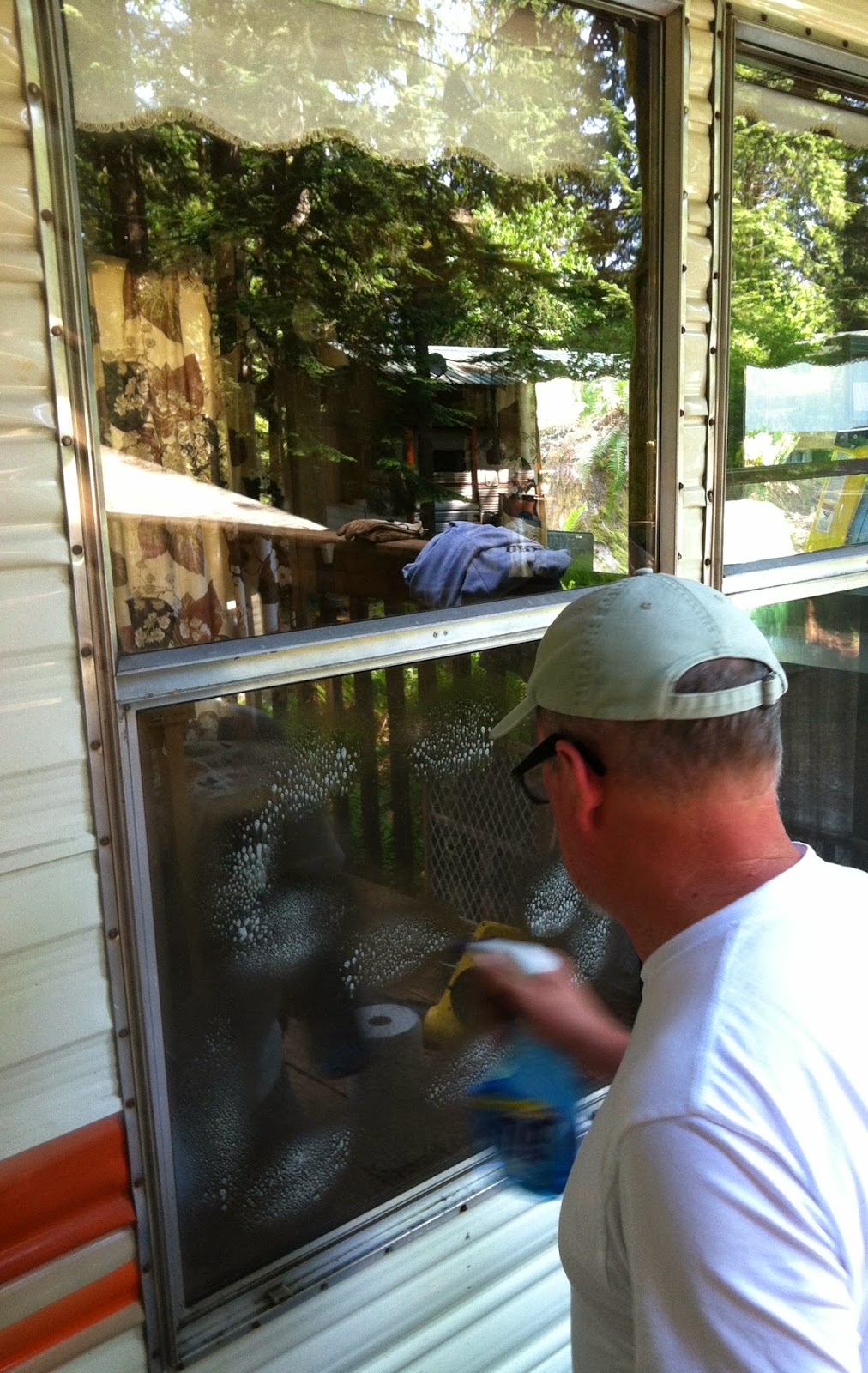 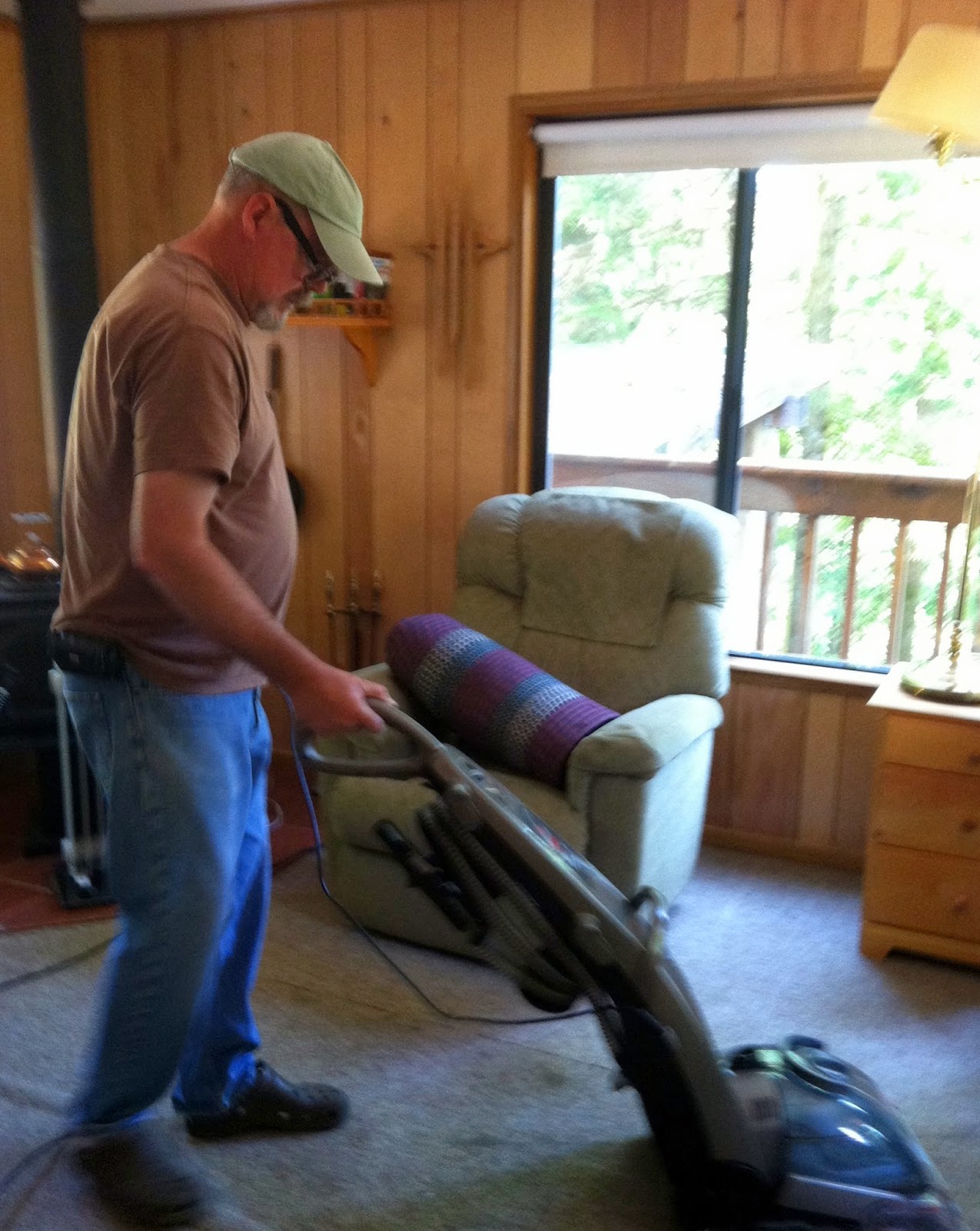 Shampooed the carpet in the trailer as well as the cabin 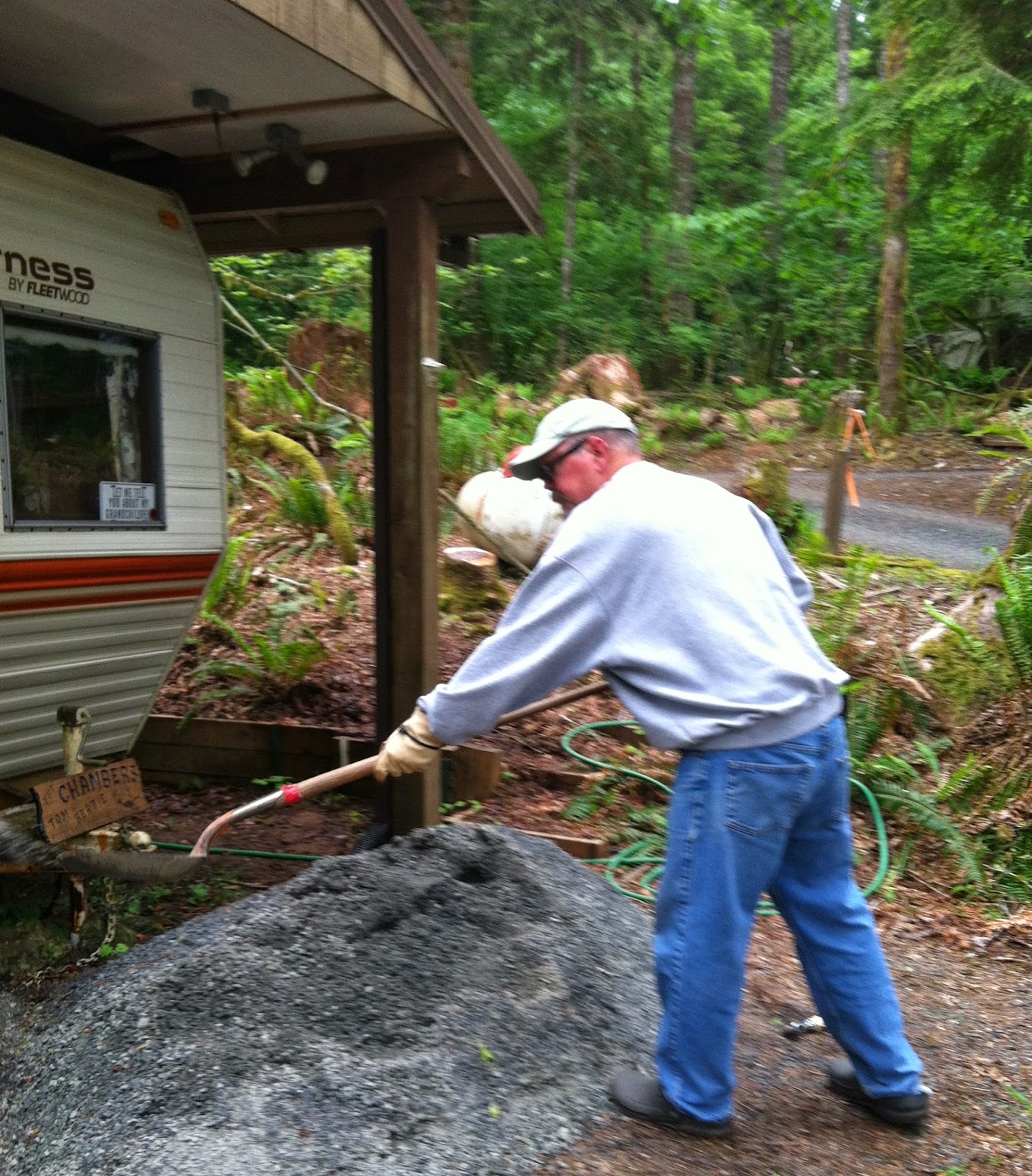 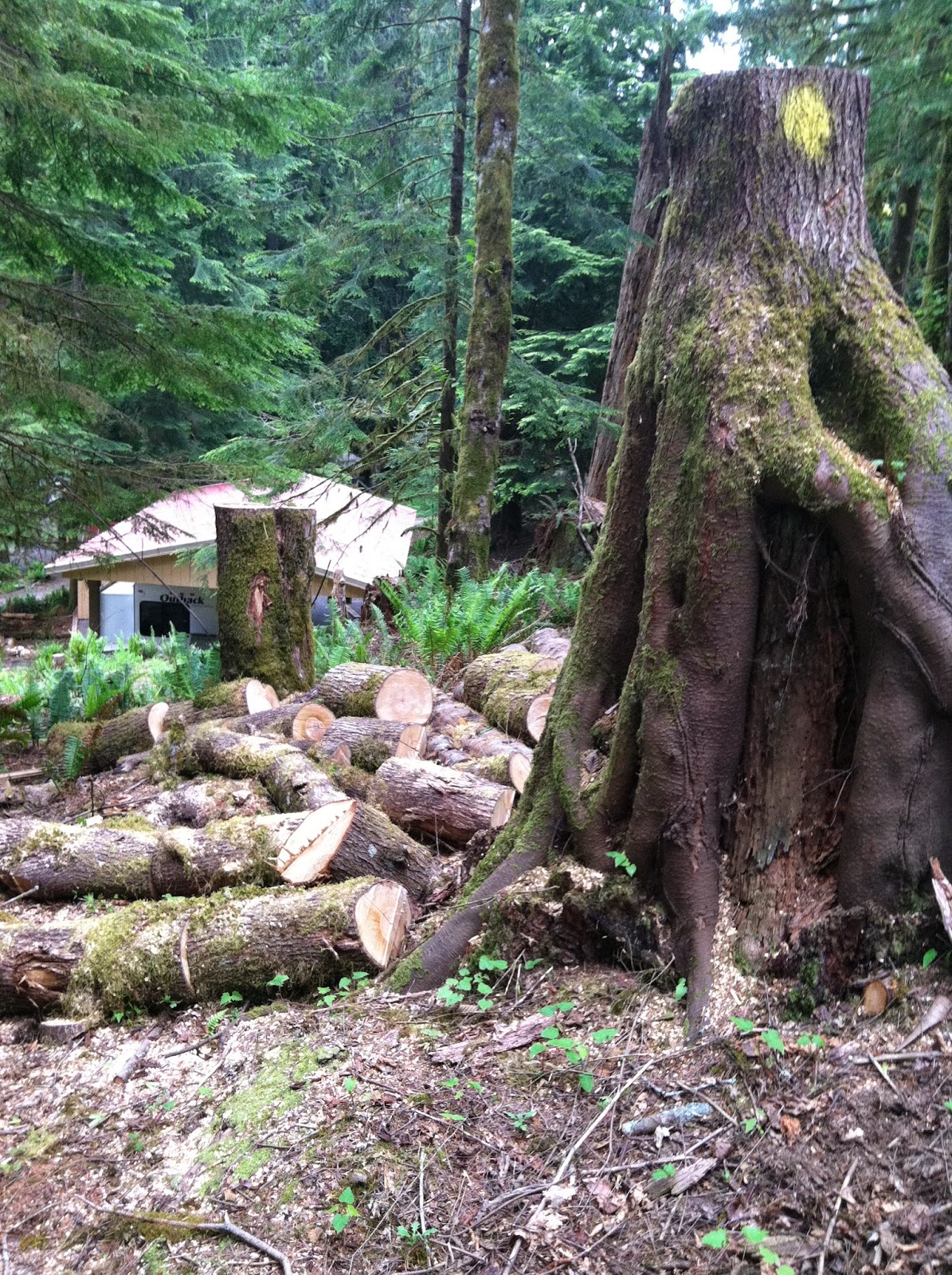 The stump at the right of the picture is what is left of my favorite tree that grew out of the top of another older stump. The tree was said to be a danger to humans as well as the north side of our cabin so it was tagged and cut off leaving this mass of wood to be split.  The problem was the tree was felled and left in large sections at the bottom of the hill, so I started splitting the wood and then tossed the pieces up hill. 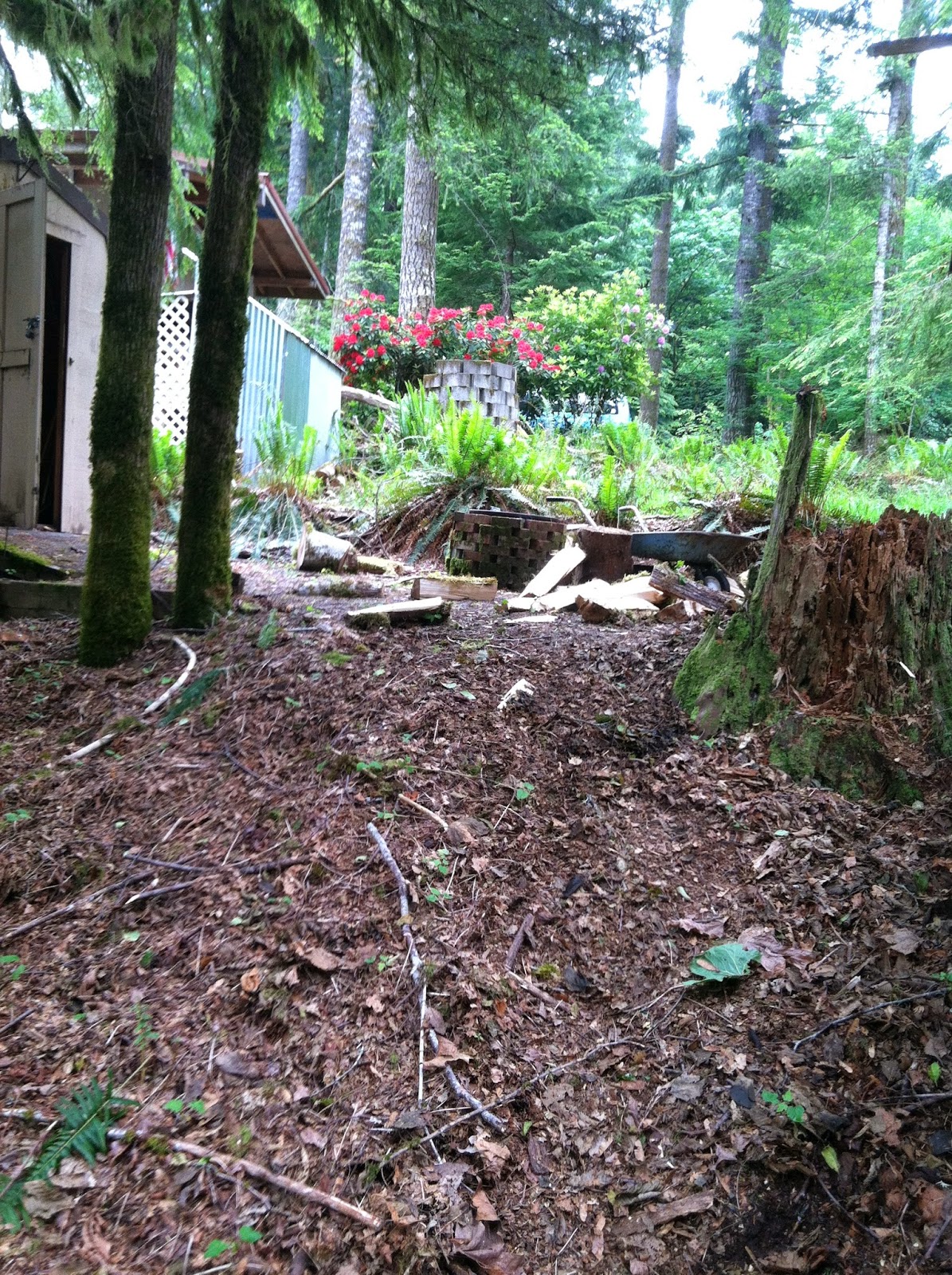 After a couple hours of splitting logs and then tossing the pieces uphill - this old man was worn out and ready to call it a day.  There is still loads of work to be done, but at least the cabin is ready for summer fun.  I found a half dozen small mountain hemlock seedlings growing out of an old growth stump and planted two of the larger ones and then brought the rest of them home to grow in nursery pots for later planting at the cabin.