Like a child waiting impatiently for Christmas, yesterday finally happened.  That is, the postal delivery finally came.  I was down the way talking to neighbors about their fall garden chores when the van pulled up.  I hurried back home and told the delivery person that I was expecting a "priority" delivery. She smiled and said, "Yep, it's here" and reached into the back of the van, grabbing hold of a small white box she turned toward me and while handing it to me she gave the box a spin as though it were a basketball.  I quickly grabbed it in mid-spin and told her it contained live fish. 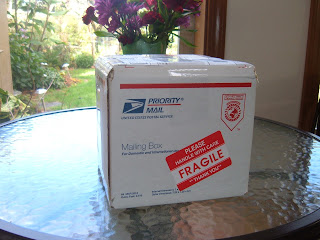 I carefully carried my precious cargo into the garden room and sat it on the table so that its inhabitants could settle before I began to open the box.
About a month ago I was standing in front of my office aquarium talking to one of the staff that also is an aquarium enthusiast.  He was telling me about a little known species of fish called the Endler Guppy or Poecilia wingei.  It is a separate species named after Dr. John Endler Professor at the University of Exeter, England.  This little jewel was first discovered in Laguna de Patos in Venezuela by Franklyn F. Bond in 1937 and then rediscovered by Dr. John Endler in 1975 who was the first to successfully introduce a small collection of them to the aquarium trade.  Unfortunately for the wild population the local city dump borders the lagoon and the runoff has virtually wiped out the only known wild population.  The Endler guppy breeds well with the common guppy so in the trade it is very difficult to find true strain Endlers.  So after my conversation in front of the office tank I went on line and found a breeder in southern California of true strain Endlers and purchased three males and three females. 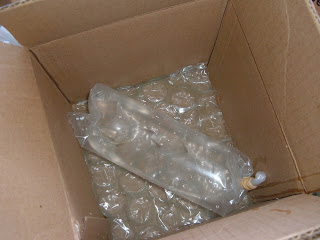 After giving the sealed box a bit of a rest and with box cutter in hand I opened it very carefully and voila!
The next step was to float the bag and contents in the aquarium so the temperature would be the same and then I carefully added small bits of aquarium water so as to slowly adjust the chemistry of the bag water to the chemistry of the aquarium.  It is a slow process but a very necessary one if the fish are to survive without any more undue stress. 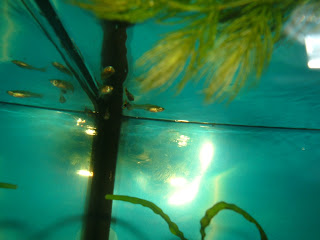 My little Endler group for the majority of the day spent it in an upper corner of the aquarium hiding form the other fish but by the evening feeding had joined the rest and seemed quite settled.