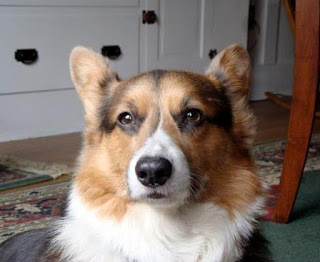 We first noticed the right leg movement to be a bit off.  When she attempted to walk up the three steps into the kitchen she lost her footing and tumbled down to the floor.  With an embarrassed look on her face she got up and climbed them slower.  MeMa called and made an appointment to have Miss Betty's teeth cleaned and mentioned that we were concerned about her right leg.  When we returned to pick her up we asked the veterinary what she thought of the leg.  I told her that she was walking off gate, dragging her nails as she swung the foot forward and stumbling a lot.  She checked her spine and leg, took an x-ray and could find nothing out of the ordinary.  Told us to take her home and give her plenty of exercise to strengthen the leg.
A few weeks had gone by and the condition only worsened.  We took her to the beach and after letting her run on the sand we had a short walk back to the car, while toweling off the dogs before putting them in the car I noticed blood on the tarmac.  In the short walk she had taken one of her nails down past the quick from dragging it.  We made another appointment and this time they had MeMa take her out to the parking area and walk her back and forth so they could see first hand.  Dr. T then did a very thorough exam in the room and told us that she was fairly certain that it was "Canine degenerative myelopathy".  The word "degenerative" alone tells me that the outcome is not good but I had to ask anyway, "So what can we do for it?"  Knowing full well the next thing I was going to hear was "Nothing".  DM as it is referred to is a disease that is chronic and progressive, resulting in paralysis.  The onset typically between seven and fourteen years of age, the gene responsible has been found in 43 breeds including both breeds of Welsh Corgis.  We took Betty home in a cloud of silence after being handed this bitter pill.  I poured us both a drink and we took all the dogs out to the front porch were Miss Betty settled herself, a custom that she looks forward to.  Popeye and "The Little Nazi" always stand guard nervously at the porch gate but Miss Betty is too dignified for that sort of doggie nonsense and lies quietly listening to her people talk.  We discuss Betty's future, tears are spilt.

Two weeks have passed, the swab test kit that will tell us for certain that Miss Betty has the gene arrived, completed and returned.  So now we wait for the results and as each day goes by Miss Betty's condition has gotten worse.  When she comes to a step up or down she stops and waits for us to pick her up and carry her, she no longer feels her right leg so when she runs her back end swings to the left to the point that if she didn't stop and adjust herself she would spin completely around.  She is eleven years old this year, in her youth she was a trained therapy dog.  MeMa and Betty would go to the local children's home and visit one of the residence who was autistic.  Watching Miss Betty work was wonderful as she is a nurturer and has the patience of Job.  She is so keenly in-tuned to MeMa that it seems she reads her very thoughts, her eyes never leaving MeMas face when they work.  There have been many dog's in residence at Menagerie Manor but only a few that had such a profound impact on our lives.  I don't know how long she will be able to walk but we are preparing for the future.  MeMa purchased a folding cloth wagon as next week we and the entire family are returning to the beach to celebrate MeMa's birthday.  It will be a four day affair with six adults, five children and four dogs, good thing it is a large house. 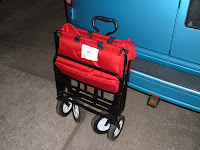 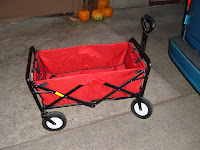 We will be able to transport Betty in the wagon until we reach sand and then she can run as she pleases.  It could be freezing and raining but MeMa and Betty always run in the surf.  I on the other hand will be the sensible one standing on dry sand holding my ladies shoes and her dogs leash, quietly smiling as I watch them dance in the surf.
Posted by Doc at 9:07 AM