Life at Menagerie Manor has been void of canine companionship for a little over two years. But after careful consideration, attending several dog shows we decided a border terrier would be a good fit. We were at an a large outdoor party and saw a woman with a border terrier so I asked her about her dog. She not only told me about her dog she gave the breeders business card, Shadowhills Border T erriers. A few weeks later I contacted the breeder by email and told him of our interest in his dogs. We were invited out to their ranch to talk dogs. I had it in mind that we would be purchasing a puppy. 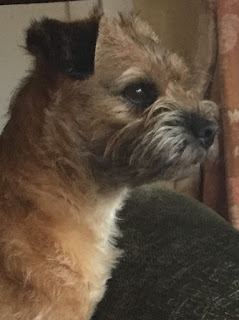 But after visiting for awhile  they let this sweet girl in. Roxy came bounding in and after enthusiastically greeting us both, rolled over in MeMa's lap for a belly rub. We were told that she has had four litters of puppies and like herself several are grand champions. Roxy was to be spayed and retire as a house pet. At five years of age, four litters of beautiful puppies and a very impressive life in the show ring. “Roxy”,  CH Joteel’s Foolin' Around at Shadowhills CGC,  has given all she can give. It is time that she is given a life of love and individual care. 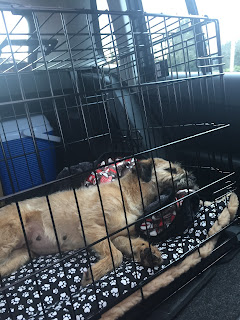 Goodbyes were tough and tearful but once we started the long drive home to Menagerie Manor Roxy fell fast asleep in the new crate we bought her, on the double quilted kennel pad with the baby butt soft blanket in the cute sock monkey pattern that MeMa picked out for this very trip. 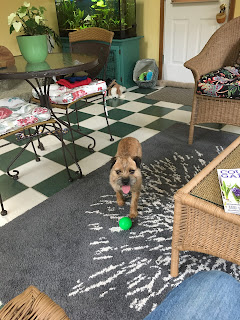 Roxy had a good time exploring the many rooms with her prized possession, the green ball. As we expected there was an adjustment period but she seems to have snapped out of that rather quickly and is enjoying life as the canine queen of Menagerie Manor. 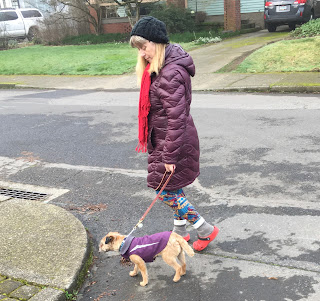 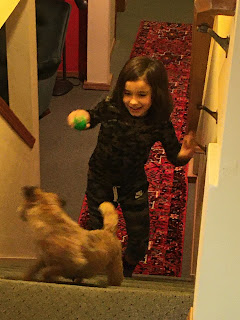 Roxy formed an immediate bond with youngest granddaughter Lucy and was thrilled that the friendship included her prized possession, the green ball. 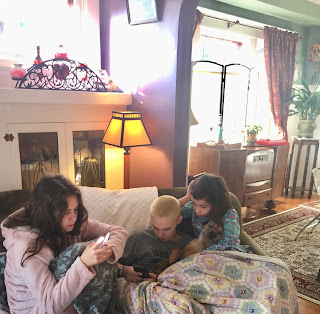 Roxy loves it when the younger grandkids have sleepovers. 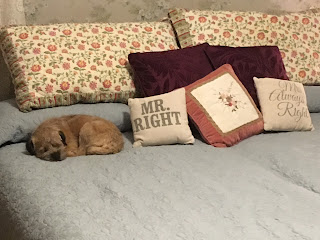 She has several very comfy baskets but quickly let us know what the sleeping arrangements would be.