Why Did The Goose Cross The Road?

MeMa and I had just dropped off our shampooer at the eldest son's and were on our way home when we hit a snag in the traffic.  All four lanes of the busy expressway were at a stand still when we noticed up ahead the reason for the traffic.  Canadian Geese will band together several nests of goslings, sort of gosling daycare.  This is just what was happening as around twenty little goslings and at least four large adult geese were on a very slow waddle across the lanes of traffic.  Unfortunately when they arrived at the other side there was no place for them to go..... so the group of parents turned their goslings around and started back from were they came.  The impatient traffic had unfortunately started to move causing the group to break up.  MeMa cried out and that was enough for me, as I jumped out of the car I removed my jacket and held it at a right angle gently moving it and herded the entire group back to the safety of the park they had come from.  And I was thankful for the waves of gratitude from the drivers who waited patiently until I was safely back in my vehicle and moving. 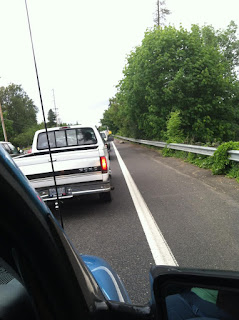