One of the little bonuses of longevity in the working world is the accrual of vacation time.  I have decided that I should start taking a day once or twice a month away from the office and get a few of those annoying jobs done around Menagerie Manor that have been on the to do list for ------- well------ some of them for years.  I have written down all the jobs big and small and to the left of the list I assigned each job a number and put a corresponding ticket into the job jar.  The idea is to pull a ticket out and complete that job no matter the cost or time before moving on to the next ticket.  This last Monday I told the office not to expect me and had plans of completing some of these very jobs I just mentioned.

Bright and early Monday morning we loaded the dogs in the car and headed to the beach.  I know, I know, but some of those jobs have been on the list for years so they can just wait another day.  The weather was gorgeous and the three dogs were so excited when they discovered they were included.  It took Sophie "the little Nazi" half the trip to settle down.  Popeye was just so happy to go that he was bound and determined not to be a pest from the start so suddenly became the most obedient dog which is completely out of character.  Miss Betty the Corgi who has had a more refined education than most humans picked her spot in the car and never moved again.
First we stopped in Clatskanie (MeMa's childhood home) to empty the mail box of the little mail her father still gets.  Then it was back on the road for another forty minutes before stopping at Bradley State  Park to let the dogs exercise and have a drink of water. 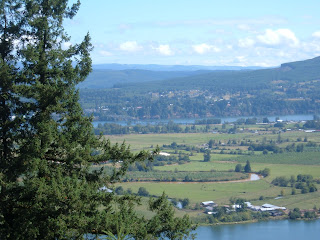 Once we got back on the road and closer to the coast we ran into a large traffic back up where the traffic was reduced to one lane, turned out to be construction and a driver of a motor coach was not paying attention and slammed into the car ahead of him knocking out the rear window. 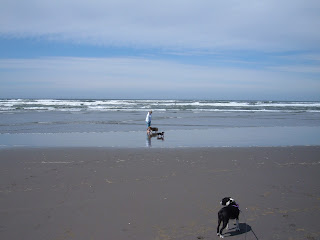 We finally reached the beach and immediately MeMa's shoes came off and whilst the girls frolicked in the tide, Popeye and Doc who both believe water was meant for drinking not for dancing in stayed at a reasonable distance in the dry sand. 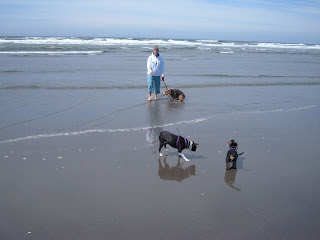 MeMa tried to convince Popeye that he was missing out on the time of his life, even little Sophie gave some encouragement but to no avail.
Miss Betty has a neurological deficit that reared its ugly head this year, it causes weak ungainly motor skills in her back legs.  We thought that it would be good exercise for her on the sand which did seem true but when we headed back to the car the condition only seemed worse and we noticed one of her nails was bleeding from being worn down.  I carried her the rest of the walk.  Our vet told us that the surgery would have little success at her age and condition so we help as we can and then when the time comes we will make a tough decision.  At this time she is happy and healthy otherwise.
We decided to take another route home to avoid the road construction and after looking at the road map headed for Saddle Mountain which neither of us have been too, and it offered picnic areas for our afternoon luncheon.  We are going to return to Saddle Mountain in early May next year as there is a five mile hike that takes you through fields of blooming wildflowers at that time of year.  After turning off the highway onto the park road it is another seven miles of heavily forested narrow roadway. 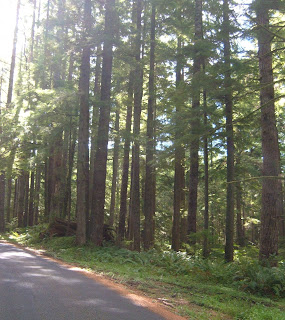 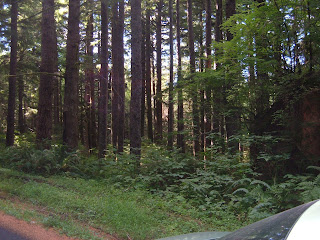 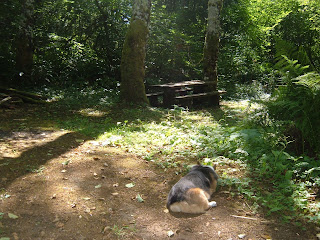 I don't think Miss Betty was impressed with the picnic facilities as when I lay her down she promptly turned her back and slept the entire stay.  It was very rustic to say the least but we did find a good spot and ate a fine lunch before heading back home.