Sitting in the back seat while my parents drove us to Moro Oregon I flipped through a couple of pamphlets that my mother purchased the previous week at the Moro Historical Society and Museum.  One quote from a pioneer resident of that town stated that they walked by the Moro City Hall that was being built "brick by brick" by my great grandfather Benjamin Franklin Hoover, they then stated that they had walked a little further west of that location passing by the Hoover Brick Yard.  Although nothing remains of the brick yard and surrounding home sight there are several buildings still standing, built by and with the very brick my great grandfather manufactured.  The Sherman County Journal wrote "Southeast of The Dalles in Moro, D.M. Radley opened a brick yard in 1896, that was later taken over by B.F. Hoover, who molded "over 7,000 pressed brick each day".
﻿﻿﻿﻿

On our way through the wheat and hay country, and there was little else, we passed acres of wind turbines. They are everywhere across the countryside, the new clean source of energy, but also controversial like anything else new.
Finally arriving in Moro our first stop was the graveyard were my grandmother's twin sister Addie is buried. Addie died in infancy of pneumonia, the twins were born on Christmas day while my great grandmother was cooking Christmas dinner for all the farm and brickyard workers.
﻿﻿
﻿﻿ ﻿
﻿ MeMa and I walked through the graveyard noticing the infant death rate was very high back in the 1800's. My parents met us at the gate with the car and we drove back into town to our next stop the Moro Museum.
For a town of 337 in population the museum was fantastic, so well designed and the displays that the crew of volunteers put together looked to have been done by professionals. 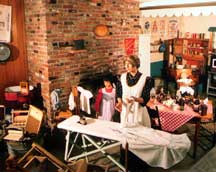 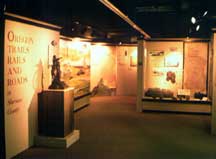 After a "generous donation" and a look around the many rooms we sat and talked for what seemed like hours with two of the nicest volunteers Veda and Larry who seemed just as excited as we were to  discover any information on the Hoover home and brickyard sight.  Larry told me that one of my great grandfather's buildings was just torn down and the bricks lay in a pile not too far from the museum. He offered to drive me to the dump sight which I gladly accepted and soon was in possession of five bricks from the Hoover brickyard. 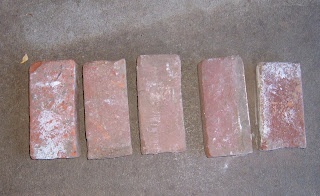 So with the promise to send them copies of our family tree and any old photos we followed their direction to were the brickyard once stood. The original buildings are long gone and in their stead is a goat farm, but it was nostalgic to say the least to just see it first hand.