When we have beautiful weather as we did this last weekend thoughts of moving to Hawaii subside.  Friday we had the "Little Terrorists" spend the night,  first taking them both to McDonald's for an unhealthy dinner and letting them both exhaust themselves playing on the slide and climbing structure until they said they were tired and wanted to go.  I don't know who was more tired, them or my parents who met us there. But it was time to go, and it was off to Menagerie Manor were we let them stay up probably far to late watching a Disney movie.  MeMa and Poppi are such terrible grandparents ;o)  They both slept in, see there was a plan there after all. At around 09:30 we loaded a wagon in the back of Vivian and set out to see the Fifth Annual 82nd Avenue of The Roses Parade, which is a small community Parade sponsored by the Rose Society and the Chinese community. 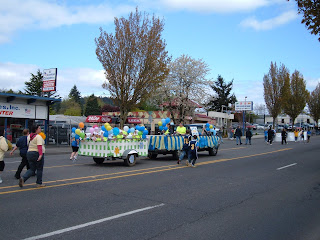 After the parade we made a short stop home before dropping the Little Terrorists off at their homes,  all sugared up for their parents to deal with.....ha ha ha!
Sunday with a promise of glorious weather MeMa and Poppi had no plans other than home time.  Coffee in hand we began our day.........
﻿
﻿

After some tidying up in the greenhouse I planted my red and Spanish onions,  I mowed, aerated and fertilised the lawn.  Then swept out the chicken house and planted half of my dahlias before running out of the iron posts that I use to mark the tubers so I will stop and purchase more of those before finishing the planting.
All in all it was a very good weekend,  hope you all had the same.