At 95 years of age she has battled and won over two bouts of breast cancer and is now battling a rare form of leukemia, buried her beloved husband and early this year the youngest of her two daughters. Life sucks sometimes and when something like this happens many folk would become bitter and resentful. I know I would have asked the good lord to just wake me when its over. Margaret MacKenzie has a better attitude than that, a true belief that she has survived this long for a purpose. I think that purpose is to impress those around her, to snap us out of any dark cloud we might crawl under when things get rough. Margaret was the driving force behind my love for roses. She has been a member of the Portland Rose Society for many years but 12 years ago when her husband passed she was unable to make the long drive at night to the meetings. Three years ago she convinced me to join and I must say I have had a blast. At the start of my second year I entered my first Rose Show, in a novice category and was honored to win a judges trophy. Margaret won the Queens Trophy for "Best Rose", and a local Television station came to her house and interviewed her while she stood before her roses. It was a thrilling moment for all of us. 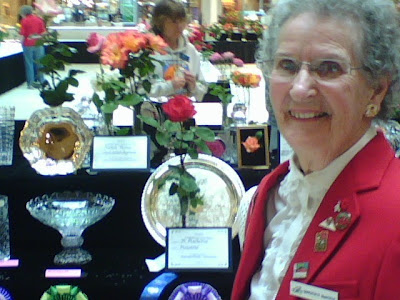 While Margaret prefers modern roses I prefer the old heirloom roses but we both have a great love for our gardens. Two days ago She joined us for supper and after we sat in the parlor beside the warmth of the fire and talked about the garden. I dashed out to the greenhouse and brought in a miniature Epiphyllum to show her the lovely bloom on it for the first time since I made a cutting from her original plant. Actually it was her mothers plant that she brought from Switzerland many many years ago. She stuck the cutting in the top of a 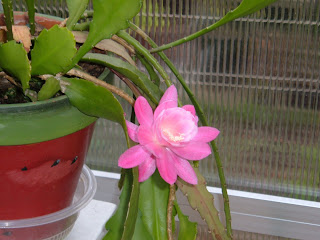 perfume bottle hidden away in her overnight bag. Wile we were all laughing at the story of how scared her mother was of getting caught with the contraband Margaret told us she has decided to sell her home and move into a retirement facility. I will still pick her up the second Monday of every month and make the drive to the Rose Club Meetings, Yesterday she brought over her mothers original Epiphylum and in the top of the pot was the perfume bottle with a new tiny cutting stuck in the top like so many years ago. She handed the bottle to me as i clung to the potted plant. "I know you will take good care of this for me".  Margaret MacKenzie will soon be starting down a new road in her life and the neighborhood will lose its matriarch. There will be a new family living in the little yellow cottage directly across the road from Menagerie Manor. Margaret has asked that I dig and move her fifty some roses over to my garden because when she comes to visit she would be heartbroken if the new owner doesn't take care of them. Perhaps I will mention potted miniature roses....they would look great on her new patio.....yes...there is a great idea!
Posted by Doc at 12:35 PM