An emergency weather alert was sent out that a major wind storm that only happens every 100 years would hit hard in Oregon and Washington at around five pm. The predicted wind event happened and along with it came fires all over Oregon. Firefighters have been scrambling to contain them but with the extremely strong winds it has been a losing battle.
After Covid, MeMa's cancer diagnosis, the riots that have turned our once beautiful city center into ugly boarded up businesses and covered in graffiti, my annoying little battle with bladder cancer, now this. Dear Lord can someone cut Oregon a break. A good friend of ours sent photos of her family's homestead that included three houses which are a total loss. All that remains are the cement foundations.

This morning at 7:30 am the next morning we received a call from our daughter-in-law that they are out of power and the power company did not expect to get power back on until 5:00 pm. I told her to pack up and come spend the day here, where there was all the comforts available. I had just started cleaning up the debris from our giant Redwood when I heard all the commotion in the drive as granddaughters, granddogs and a couple very disheveled parents poured out of their truck and into Menagerie Manor. 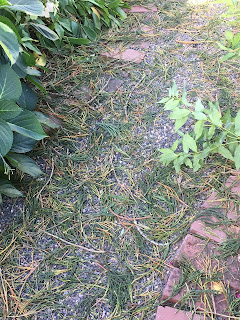 The Redwood I planted in the north garden will guarantee this old gardener will always have work to do. 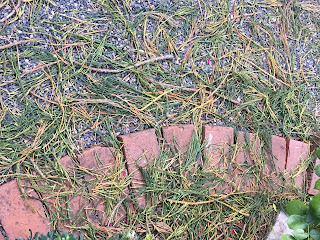 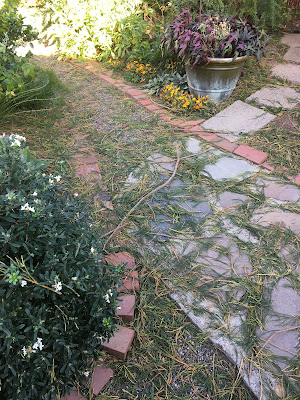 ........and do.
We had a great day of laughter and good food. Then my son received a text that power was back up. And once again we returned to worry of what turmoil the high winds and so many fires getting out of control. Entire rural towns evacuated and many burnt to the ground leaving everyone homeless. 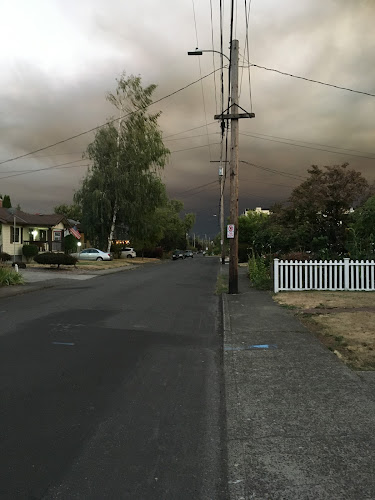 Day three and the winds are still pounding all around us. Around four in the afternoon we had eight firetrucks roar past the Manor. Several stopped and blocked entrance to our street, the majority went three blocks passed. 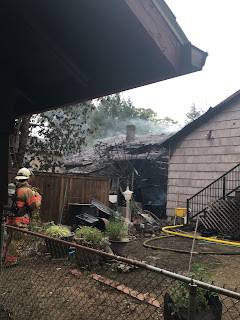 A neighbor at the end of our street lost his house to fire. 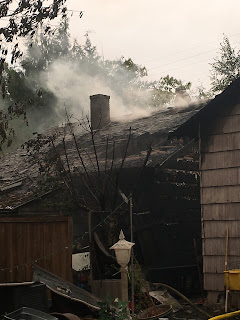 A total loss and the neighbor on his left received major damage to her garage. A very nice firefighter who stood guard in front of Menagerie Manor to keep cars from gaining access to the neighborhood received a communication on his radio that the roof was about to cave-in. He had been commenting on how beautiful our home and gardens were and warned us to be aware of sparks and debris may fall so asked us to stretch hoses out leaving them easy access in case we should see fire. 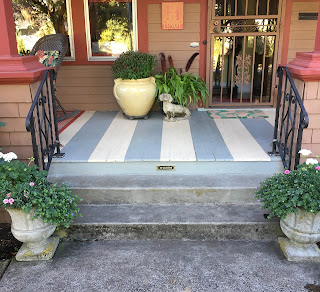 MeMa said it was time to set up our fall display on the front porch, maybe it will bring some rain.
Friday - September 11 - Update
There are so many raging forest fires around us now that have completely burnt entire towns to the ground. The air quality here in Portland is very unhealthy that we are now sequestered by the air Covid and Cancer, what next?
We have been very worried about our little cabin, the "Big Hollow" forest to the near east is burning out of control. With the high winds the heavy smoke has made it impossible for firefighters to gain control and totally impossible for water air drops.
This morning we received hopeful news that the wind has shifted so they may be able to attack it with the water air drops.
The air here in Portland is still unhealthy keeping everyone sequestered. We spent the afternoon with some wonderful neighbors, playing a board game and occupying our thoughts.
Posted by Doc at 8:10 PM