Up at 06:45 this morning, showered and dressed and sipping a cup of coffee when Roxy came bounding out of the bedroom ahead of MeMa all bright eyed and ready for her breakfast. The Costco near us has an early shopping hour for seniors and First Responders so at 8:30 this old gardener and his beautiful lady were greeted by the staff as we entered a bulk shoppers paradise. We head right over to the pharmacy were we find almost everything we need but at great savings. I picked up a huge potted chrysanthemum for MeMa's fall porch display. We were in the car and pulling out of the parking lot at 09:00 with not one item that would put us in that bulk shopper category. 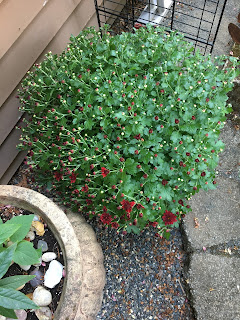 Back at Menagerie Manor our eldest son called and said he was headed to the Manor to help dredge the pond of items that needed retrieving. I quickly hooked my sump pump up and drained about 1,200 gallons to make it easier for Nathan to retrieve. The first item was a cement paver that mysteriously appeared in the bottom of the pond last year perhaps even two years ago when I did some major deconstruction around the existing pond. 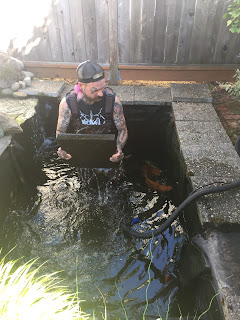 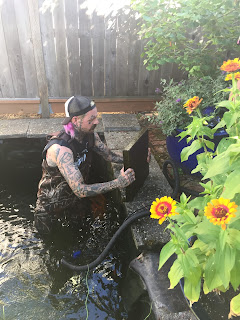 The second item sadly, was a large pot of the most beautiful yellow flowering water Lily. All that remains is the large pot with a few large rocks, no soil and not a speck of water lily. Consumed by the voracious fish who for some reason decided after ten years water lily was on their menu. 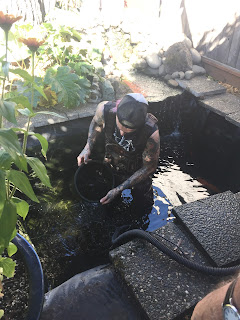 The outside temperature was 90 degrees but Nathan was happy with his hip waders that made the cold water bearable. 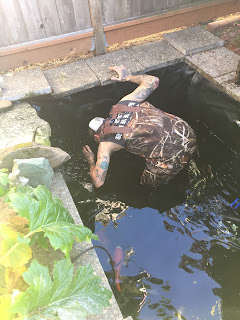 Once again the bottom of the pond is clear of interesting items. Athena and her cohorts bid adieu to Nathan and his colorful hip waders. Nathan  who works  from two AM until ten AM heads home in order to spend time with our grands, fix dinner that his wife prepares before she heads to work at noon. Nathan usually heads to bed between four and six. Life is so much simpler being retired and quarantined. I was going to join MeMa on the front porch with a glass of lemonade but Roxy beat me to my rocker. 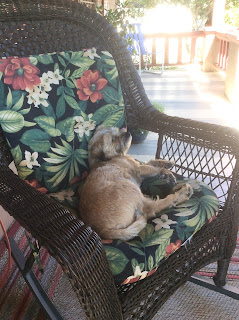