We have been completely quarantined but when our surroundings get to us, we get in the car and go for a long drive.
I have very little time to read or write blog posts but thought I would touch base with this short update. There is nothing like having to do it all to make one realize just how much ones spouse does in the shared running of a large home. I never see the end of the laundry, the only part of laundry that was my responsibility was to put things away after it was washed, dried, folded and left for me in nice fresh little bundles. We are counting the days untill MeMa's second round of chemo. The first one included Taxol which caused every joint in her body to cramp up. Nausea was so bad that she couldn’t look at or smell anything without becoming very ill. I tried so hard to make her comfortable but it was a losing battle.
In those first few weeks she had lost over twenty pounds, able to stomach meals like a 1/4th of a cup of broth. She could not eat the same thing twice. Even into her second week when the pain was letting up and the nausea was for the most part under control she would ask for a particular food item, eat a small portion of it and then she was done with it. Either toss the rest or I usually added it to the growing number of leftovers that I would attempt to finish as a lunch or dinner on the days MeMa couldn't eat. 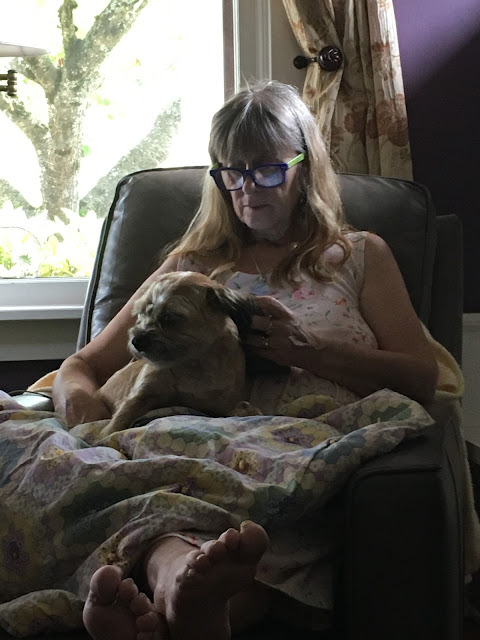 Roxy, never far from MeMa. She takes her job very seriously.
Posted by Doc at 6:31 PM