A Chapter Closed : A Letter to The Little Terrorists

Closing out parts of our lives leaving us with nothing but memories, this happens more frequently in our older years or at least that is the way it seems.  I suppose that is all part of life as it should be.  As children we don’t come face to face with these realities because as we are dealing with these episodes now, our dear parents dealt with them and hopefully protected us from these realities like caring parents do.
In a short time it will be hard for you children to remember anything about Great Grandpa Dale. Sadly you never got to know Great Grandma Lela.  She was a real hoot always out for a good chuckle and a regular pill about getting your Dads to do some outrageous things that would normally get them punished for at home.  It was all good fun and she would have loved to have known you.  Alas that was never to happen as she passed several years before you all came into our lives.


Just a few seconds before the ball dropped New Years Eve night the phone rang. It was the care center were MeMa's father was living.  He had fallen the week before and had taken a nasty turn for the worse.  They wanted us to know he was not responding to them but that he was holding his own at the time.  They promised to keep us posted until we came the next day at our usual time in the afternoon.
MeMa had just made me a turkey sandwich New Years Day when they called again telling us things have deteriorated and they felt we should come quickly.  His breathing was laboured but they had made him quite comfortable so we sat next to him and MeMa stroked his head and told him we were there.  The hours passed and his condition seemed to stay the same so when my parents called inviting us out for a quick dinner we accepted and told the staff to call immediately as the restaurant was nearby.  We had just sat down when they called and said he had passed.


As we sat with him earlier I thought of all those happy memories of life in Clatskanie, the small coastal town were MeMa grew up as her Mom and Dad's only child.  Her Mom, Lela was the town's nurse and her Father Dale owned and operated a small TV repair shop during the day and owned and operated the Avalon Theatre at night.  This was a town that people let their children run all over with never a worry for their safety.  They never locked a door.  In fact, when I first came to Clatskanie as we left to go out for the evening I was surprised that they closed the door and just walked away.  When I asked if they meant to leave the door unlocked I was told they didn’t have a key.  The old house was the location of big parties with tons of guests all laughing and having a great time. 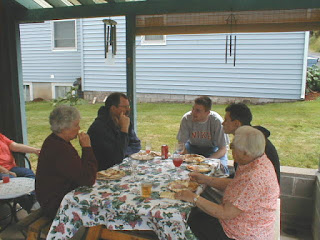 When your Dads were born they spent lots of weekends with Grandma and Grandpa and I will tell you they got spoiled rotten staying up late, hanging out with Grandpa Dale in his "ham shack" while he tinkered with his radios.   I have never known anyone with more quiet patience than Dale.
Your Dads have many fond memories of summer meals eaten on the patio and we were usually joined by Grandma Arline and others from the Anderson side of the family.

Grandpa Dale came to Clatskanie as a sixteen year old moving into a boarding house ran by the Anderson family, the matriarch of the family was “Mrs A.” who had several children and Grandpa grew up with them as one of their own, and they remained “family” all through your Dad's young lives. 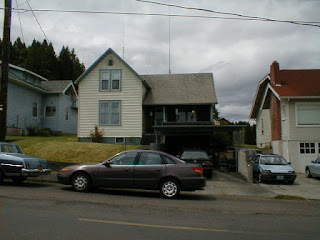 The old house is out of our hands now as after Grandpa went into the care center the state confiscated the entire estate as payment for his upkeep.  MeMa and I closed the door a year before his passing and walked away knowing we would probably never return.  Grandpa will soon be buried next to Grandma in the old cemetery in Clatskanie.  Perhaps some day you might visit this little hamlet nestled down in the valley, drive by the old house on Tichnor Street and perhaps put a rose on the grave.  Red roses were always Grandma Lela’s favorite, you can’t miss it up there at the edge of the forest.
Posted by Doc at 7:09 PM