.........and I was sick of looking at it! Not only the "Poodle" look but the hard work that MeMa put into it every year just to keep me from digging it up and tossing it on the brush heap. The front garden was designed originally as a low maintenance landscape so that I could devote the rest of my time to the back gardens which are just the opposite.....high maintenance. There is no lawn just shrubs, trees and cotoneaster ground cover. When purchasing the trees I got such a good deal on a Japanese Black Pine that, I bought three.....well it made sense at the time. About five years later I had to remove one because they started crowding each other out. Number one rule of landscape...... "never plant in even numbers"! Well this just wouldn't do, so about that time I purchased my first Monkey Puzzle tree and that is when I removed the second tree and foolishly shaped the last remaining pine into a green Poodle.

About the third year of the Poodle look I told MeMa that I was going to remove the last Pine because I was too lazy to be spending so much time every spring carefully removing all the hundreds of candles that pop up and need to be removed in order to keep the Poodle at bay. MeMa just shook her head and volunteered to do the pruning every year if it meant keeping the tree. I relented and year after year she would get into her garden gear, including long sleeves as the pine needles would cause a great rash all over her arms. I would be weeding and telling her she wouldn't have to suffer this job if she would allow me to take the tree out. I felt guilty every year as she would rub lotion onto her arms after battle with the Poodle. So this year ( I'm slow) I came up with a plan to keep the fair damsel from any more agony and still keep the pine. It will take several years of corrective pruning but will benefit both of us. I enjoy topiary when it has its place and the front garden is ideal. It will still be heavily controlled growth but not in the big round ball shapes, rather a more open and airy look.


It was amazing how much debris was removed in the four hours it took me to start the process of change. I filled our city yard debris cart and piled even more into my trailer. (By the way, pine takes too long to compost so just get rid of it). 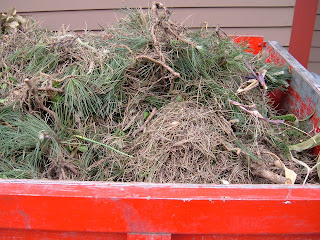 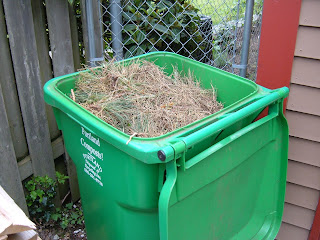 As I started opening the balls up I realised how many dead needles were packed into each ball, so as I made an opening I would dig my hand in and pull out fists full of dead needles....and spiders....yuck! When done, I stepped back to take a look and I was quite certain I heard the tree make a sigh of relief. I then went into the house, showered and rubbed lotion into my scarred arms :o(
Posted by Doc at 12:00 PM