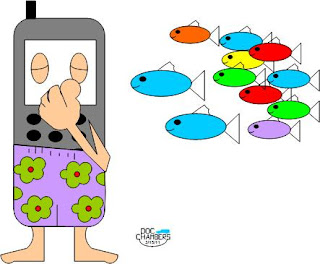 Really?....again???  Those are the two questioning words that came out of a very frustrated MeMa's mouth along with a lot of arm flailing and....."the look".   I had been out knee deep in the koi pond, in my wellies, net in hand mucking out the debris from the winter.  I made a sweep and came up with a heavy net full when I spotted something.  "Hey...... that's my cell phone!"  I grabbed it from out of the muck to find it giving off this very annoyed little buzz which I'm sure was akin to a swan song.  I looked at my belt and all that remained was the clip that WAS secured to it's faux leather pouch.  I took the irate buzzing phone into the house just so I could see MeMa's animated version of frustration at its finest.  She tossed it into a bowl of rice while asking me if I frequently get calls while mucking out the pond????  There obviously is no come-back to a question like that if one intends to live out a full life.  Hey,  I only look stupid!  Although at that point MeMa would probably argue that analogy, as this is actually the second time in a year that my fish borrowed my phone with disastrous effects.  We checked the phone after a good time and found the screen to be sort of opaque in color.  MeMa handed it over and said, "Let's go get you another phone."  On arrival at the phone outlet, the salesmen took one look at it and said "Really?.......again?"  And then for the second time I got "the look".  Wow, two people that just didn't see the humor in this story and both with the same look on their faces.  I very quietly asked if he had one that was water resistant.  So.....I am the proud owner of a water resistant flip phone.   Yesterday while I was out bent over the waterfall on the pond MeMa,  tapped on the window and asked if I had removed my phone before going outside.  I quickly stood,  pulling my shirt up, revealing nothing clipped to my belt.  MeMa gave a satisfied smile and went off with what she was doing and I quickly bent down grabbing my new phone from were it had fallen into the edge of the waterfall, and took it safely into the garage.   As I sat it on the work bench I said, "Wow, it really is water resistant."