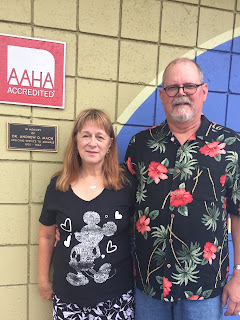 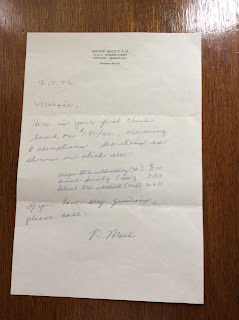 On one of our recent trips to north Portland MeMa noticed the marquee sign in front of Lombard Animal Hospital announcing an open house. In 1972, I had applied for the position of kennel cleaner. As I was being introduced to the staff the surgery door was quickly opened and out popped this little pixie of a girl with long hair and straining under the dead weight of an unconscious dog. When she got to the door leading to the recovery kennels the Doctor doing the introductions said “and this is Marjie,” she turned and smiled just as the dog lost it’s bladder soaking her light blue surgical smock. I jumped toward her asking if I could help, but she kicked the door open and said “nope, you’ll get plenty of your own.” It was love at first sight and still is after 43 years. Our late employer’s plaque hangs next to Marjie’s head in the photo and the second photo is note she received with her first paycheck, $1.80 per hour. The new doctors and staff were thrilled that we took time to come today and gave us a tour of the recently remodeled facility, they also took a couple of photos of the letter.
Posted by Doc at 10:43 PM