Normally I would do all my rose pruning on Presidents Day but this year we had snow. So, fearful of causing more damage than good, pruning was done a week later. Pruning my roses is a job that takes time and concentration. It is a process that is started and finished in one day, so I start by laying out all tools that I may need. Next, I stand back and absorb my surroundings. Mostly I  end up staring at the house and the craftsmanship it took to build it. I only have about 40 roses and and am very well practiced at pruning them. The actual work doesn’t take a whole day, it’s the standing back a absorbing my surroundings bit that takes time. Menagerie Manor is 102 years old, we are the second owners and still share this grand old house with the spirit of the first owner. Most of the time we forget that Lucy Warner never really left the home her father built. Then she will do something to make her presence known. Last month our two youngest granddaughters spent the night. Before bed, but after the huge helping of ice cream their parents don’t know about, they like to play “dark hide and seek.” There are three floors and thirteen rooms in Menagerie Manor, plenty of hiding places that two little girls and MeMa can hide in. That leaves this old gardener as the lucky person who counts to 40, yells ready or not and then stumbles through the darkened house only to get the crap scared out of him when shining his lousy little pencil light into a dark corner and be pounced on by a sugar induced screaming child. Perhaps I should rethink the ice cream? We had just finished round three and were gathering in the parlor. Taeya, the ten year old came walking past us and said, “MeMa your house is creepy”!  She then sat down in a chair, as she looked up she grabbed at her face and yelled, “Ouch!” A cardboard star attached to a wall hanging shot across the room hitting her just below the eye, a distance of about fifteen feet.
Back to the roses......I was pruning the rose we call “Lucy’s Rose” when that evenings events popped into my head. 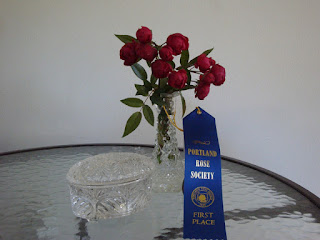 I think Lucy Warner would have been happy to know her rose has won several trophy’s at the
Rose Show. Maybe she does know?