Until the next drama.... 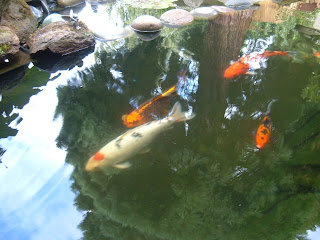 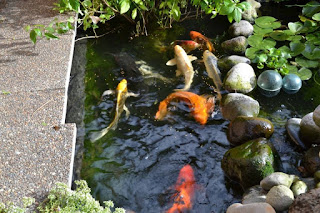 Earlier in the year I sadly posted about the tragic loss of my beautiful Japanese koi fish, eight of them ranging in age from 12 years to 24 years.  All of them purchased as three inch fry and chosen for certain color patterns so each of them very different from the other.  At the time of their death most of them were over 12 inches and some were over 20 inches.  After raising them for so many years like most of you raise a dog or a cat we were very attached to our pets, each had a name and all were very tame and could recognize us over a stranger in the garden.  When someone new would come stand and look at them they would swim to edge and when they saw that it was neither MeMa or myself they would become very agitated and swim to the far side of the pond.
Only Athena survived and it was touch and go at that.  But survive she did, although it has been a lonely time for her as koi are very social creatures.  Fortunately for Athena there was one more survivor, a lonely brown tench which is a British species of carp.  I also tossed three small goldfish in as well.  They had been living in the small pond I have in the greenhouse.
We talked about purchasing more koi but decided that we should purchase larger fish as we would never see them grow to the length and age of our old ones.  I took last Wednesday off as in the morning I had to go into the hospital and be violated in order to see if the whole bladder cancer thing was still not an issue.  I don't have to be violated for another six months, so all is well.  So feeling quite good about myself, we went in search of some koi.  Keeping in mind that the last time I purchased koi was eighteen years ago the prices had tripled if not quadrupled.  I am just not prepared to pay three hundred for an eight inch fish.  As we drove up to the last place on our journey we both saw a sign that read "buy two koi get one free".  They had a pond full of very large koi but they had prices that ranged from 800 dollars to several thousand dollars that we quickly walked away from them.   We finally found our koi special, but they are not the large koi we envisioned purchasing.   However they are also not the small fingerling's that we purchased many years ago, they are at least another inch longer. We purchased two and got the third free but once again picked because of color pattern so they are all different from one another. 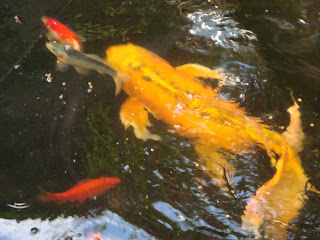 From the top left in this photo are two of the new koi then our sweet survivor, Athena and the orange fish at the bottom is one of the greenhouse goldfish and just to the right of Athena's big wagging tail fin is the third koi.   Athena is one happy koi. 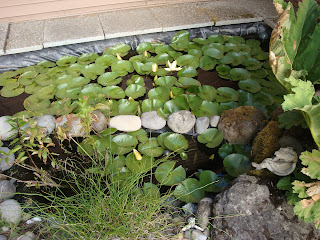 My water lilies have flourished so the gate has been removed from the channel that connects the two sides of the pond and the koi have complete run of the entire pond.  Peace and tranquility have returned to Menagerie Manor.....until the next drama.
Posted by Doc at 11:32 PM