Just before we flew to Disneyland we had central air installed at Menagerie Manor.  I believe I mentioned in earlier posts that Oregon has been having record heat.  Heat in the spring that we would normally have in the middle of summer.  The entire month of June had been without a measurable drop of rain and July was following the same pattern.  My father moved into the house while we vacationed, he watered and took care of the animals.  He called us and told us that the air works good and he was enjoying it very much. 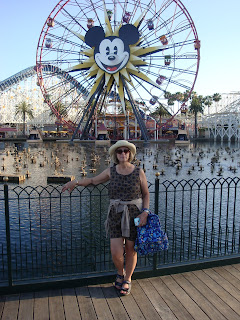 The weather in Anaheim was temperate, some of the locals said that it was cool for the time of year which was great for MeMa and I as we were expecting scorching temperatures and unbelievable summer break crowds.  We got the crowds but the scorching temps thankfully never happened.  We had a wonderful time on the rides and since we had no children or grandchildren with us we took advantage of that freedom.  When the crowds got to be a little much or we wore ourselves out running like a couple of kids, we then stole ourselves away and had a glass of wine or some other adult beverage and relaxed and just watched people.  We also did a couple of tours that MeMa signed us up for prior to leaving Portland.  The first was the garden tour which walked visitors through different parts of the park explaining gardening methods or took us on specific rides while our guide explained every detail of gardening in the park.  The second and the one we both recommend to any Disney fanatic was "Walking in Walt's Disneyland Footsteps", a fantastic tour that told about his life and dreams for Disneyland.  After a scrumptious lunch we were taken into the private Disney Family Suite called the Dream Suite. 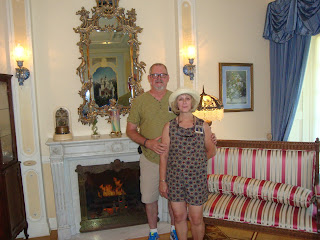 Walt Disney died the year before the Suite was completed, but it was completed to his specifications and is now used for dignitaries and prize promotions.  In each of the bedrooms there is a button on the wall that is called the "Goodnight Kiss" and when pushed brings the room to life.  Magical things happen before your eyes such as paintings coming to life, music playing, stars twinkling all over walls and ceilings.  A miniature steam locomotive comes to life and rolls out of its display box winding in and out of dozens of miniature scenes from the park and as it passes each of them set up on the shelf that goes completely around the entire room they all come to life as well.
After six days we returned home and work.  I had divided some of my duties with the other staff and told them that it was imperative that these tasks be done on a daily routine.  And to some extent they were except for one, and it was the one that I told the individual, "This must get done."  Unfortunately it was not ,so I have that job to contend with for the next week or more.
This weekend we took some friends up to our family cabin for a lazy weekend of doing absolutely nothing.  Unfortunately it reached temperatures in the upper nineties and this afternoon it got to 100.
We did absolutely nothing but think about our central air that we really had not enjoyed much.

We are home now and the central air is divine.  Makes one wonder why we waited so long to have it installed????  Just saying dear!