Dear Mr. President,
You are cordially invited to Menagerie Manor for the 41st annual clock re-setting extravaganza.
Date
March 8th
Time
Bloody early because there are soooo many to re-set.
Refreshments
Ya better bring your own, because you don't look like a Scotch drinker.
Directions
Tell your pilot to land the helicopter in the Franklin High School Football field as March 8th is a Sunday, then ask anyone in the gathering crowd of nosy people to point out Menagerie Manor. 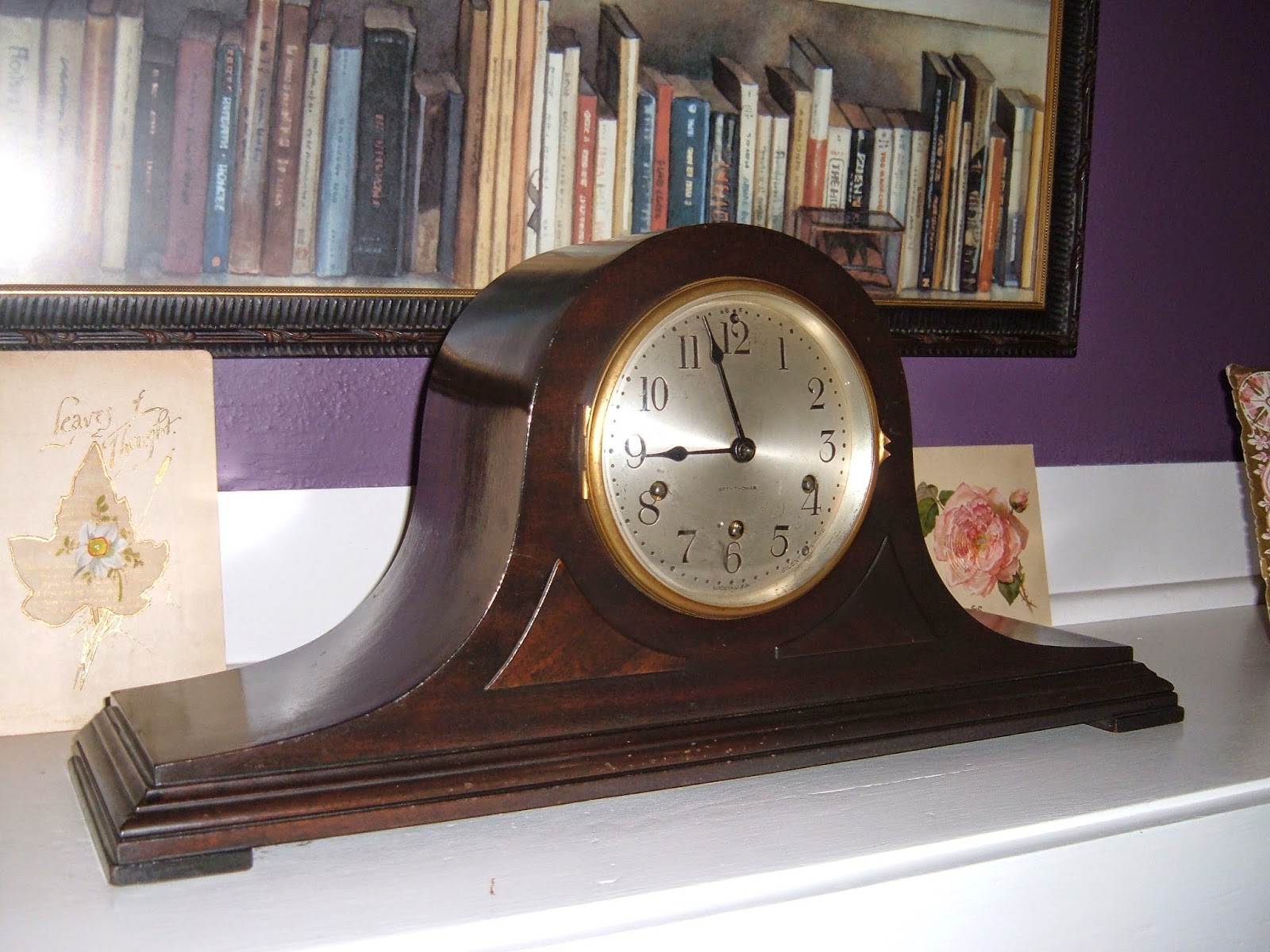 Clock #1
Seth Thomas, Westminster Mantle Clock -1928
This event is timed, no pun intended. When "Old Westminster" here strikes 9 o'clock the fun starts. It is Spring forward so this one is easy but be sure to stop every quarter hour and let it finish chiming. Now don't start whining Mr. President those are MeMa's rules and she is very guarded with this clock because it was our house warming gift to each other when we moved in. Besides there are clocks on all three floors.
Tick Tock! 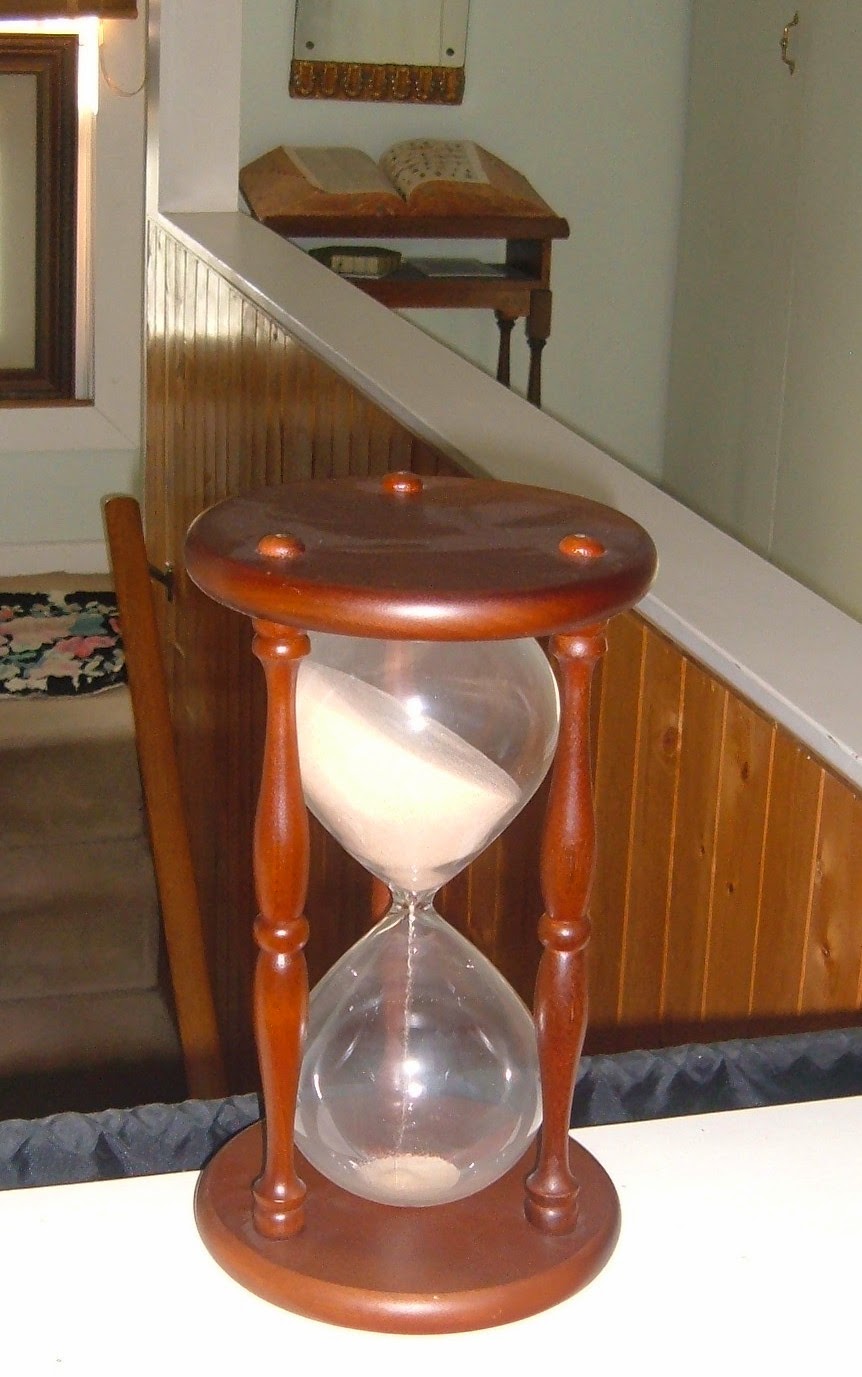 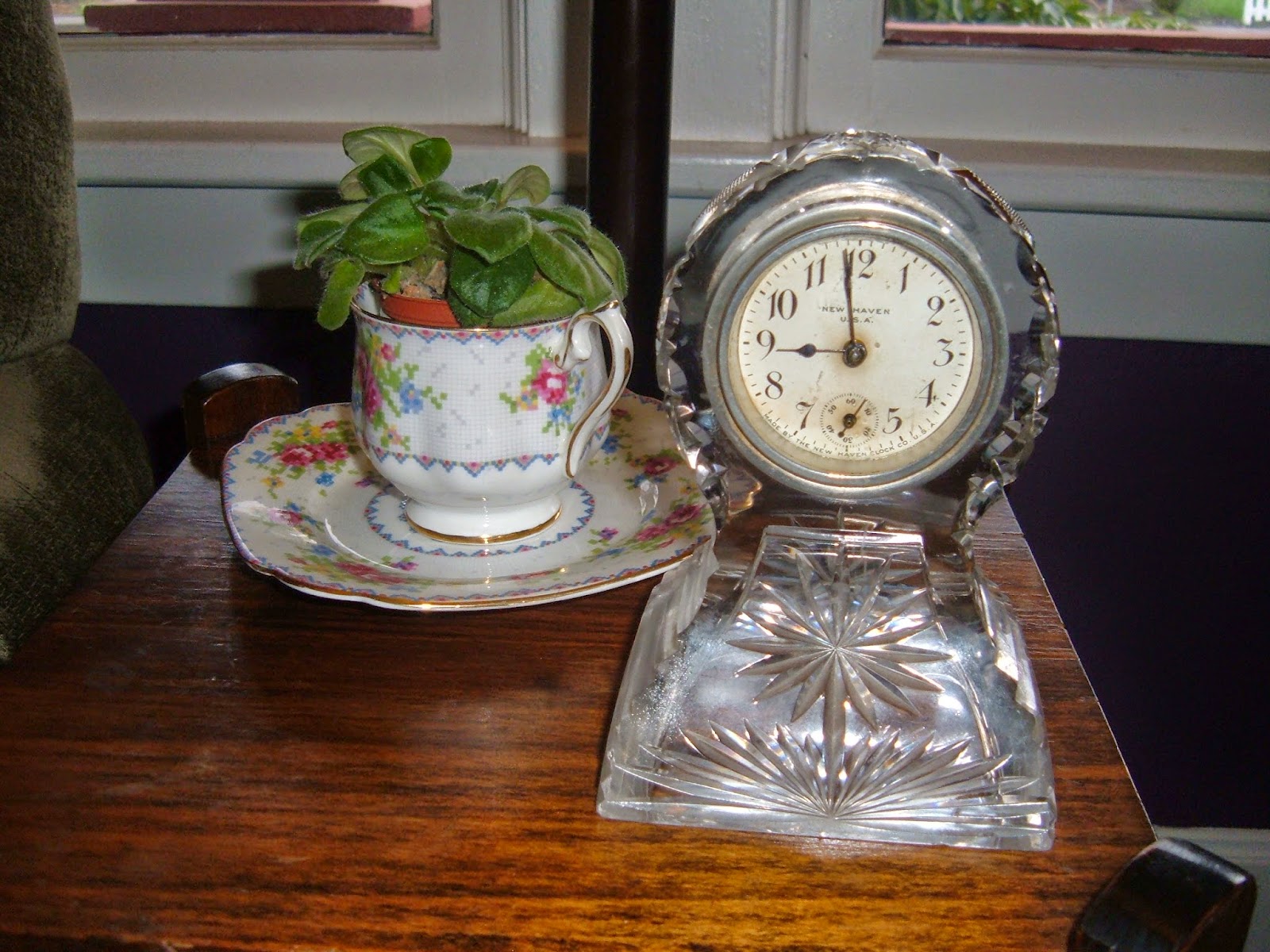 Clock #2
1900 New Haven Cut Glass Boudoir Clock
You might want to put white gloves on for this one it shows every finger smudge.
Tick Tock! 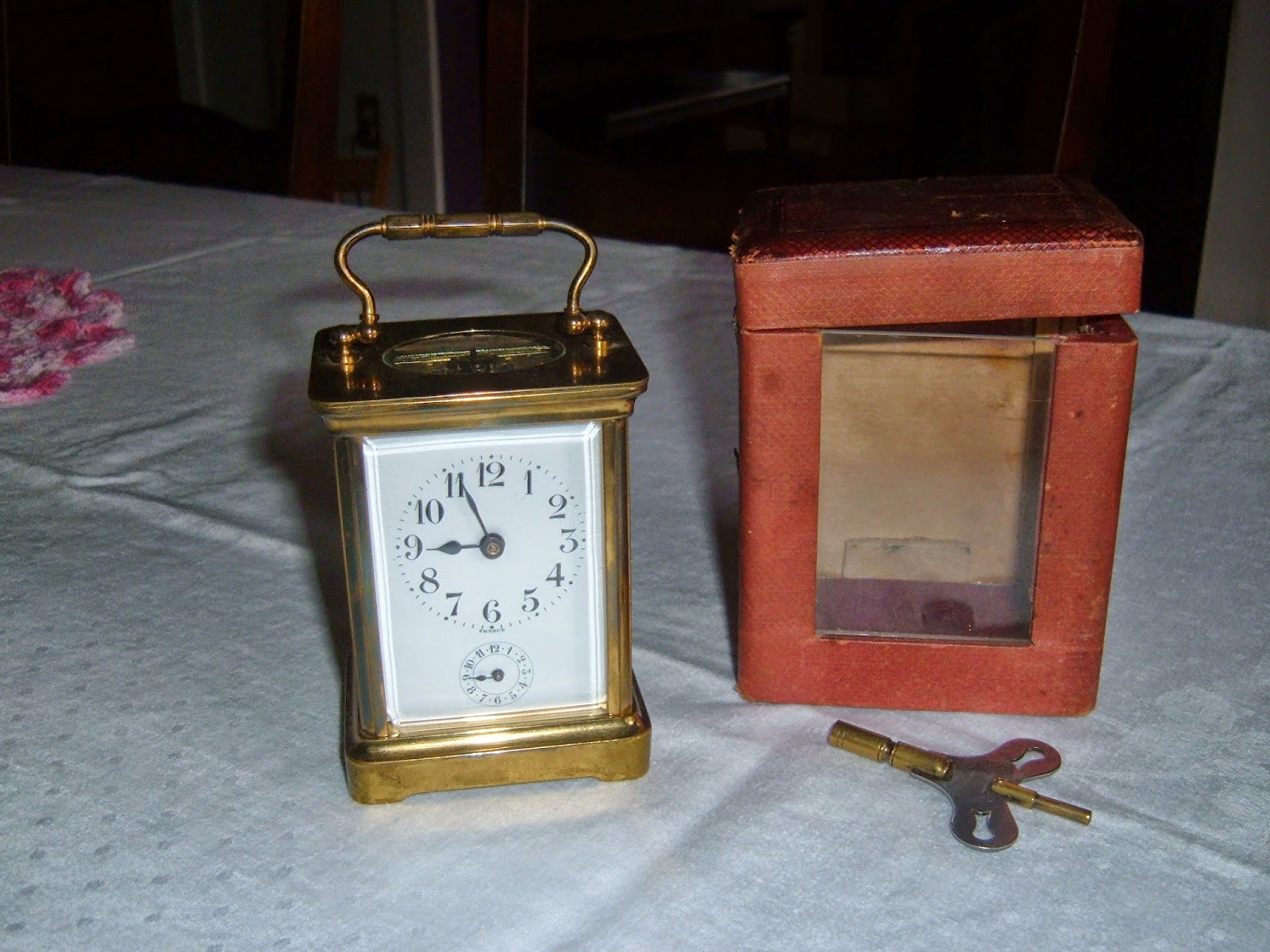 Clock #3
Circa 1880 - French Carriage Clock. After you wind this one, put it back in its glass fronted traveling case, you never know when we might take that carriage ride.
Tick Tock! Clock #4
One of my personal favorites,
German made Cuckoo clock purchased on a family vacation back in the 60's.
And mind the Aspidistra!
Tick Tock!
Through the swinging door and into the kitchen, the busiest room in the house. 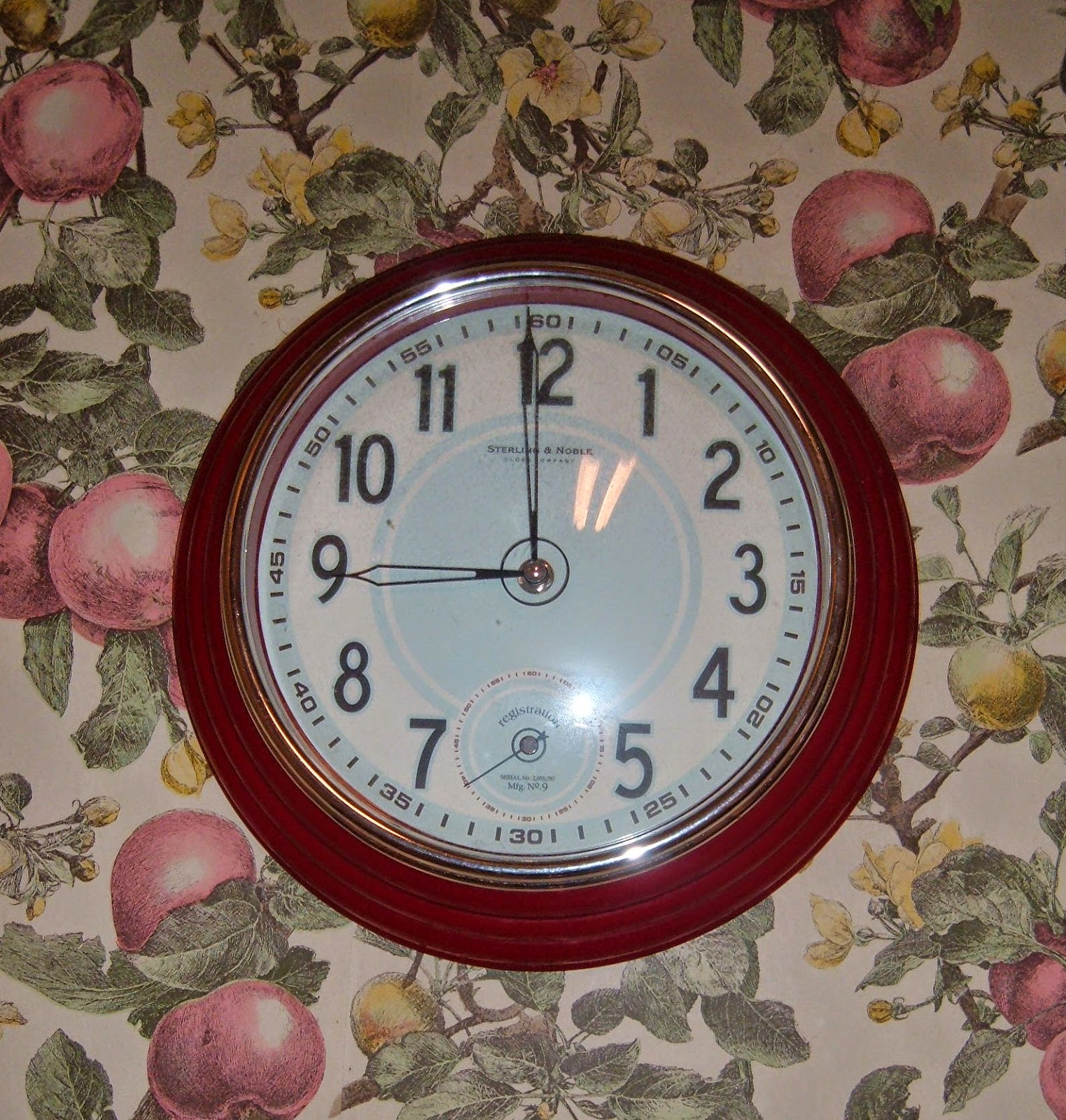 Clock #5
MeMa's much cherished apple wall paper is a perfect back drop for this large bright red clock by Sterling & Noble. Although battery operated it is a nice solid clock and easy to set. 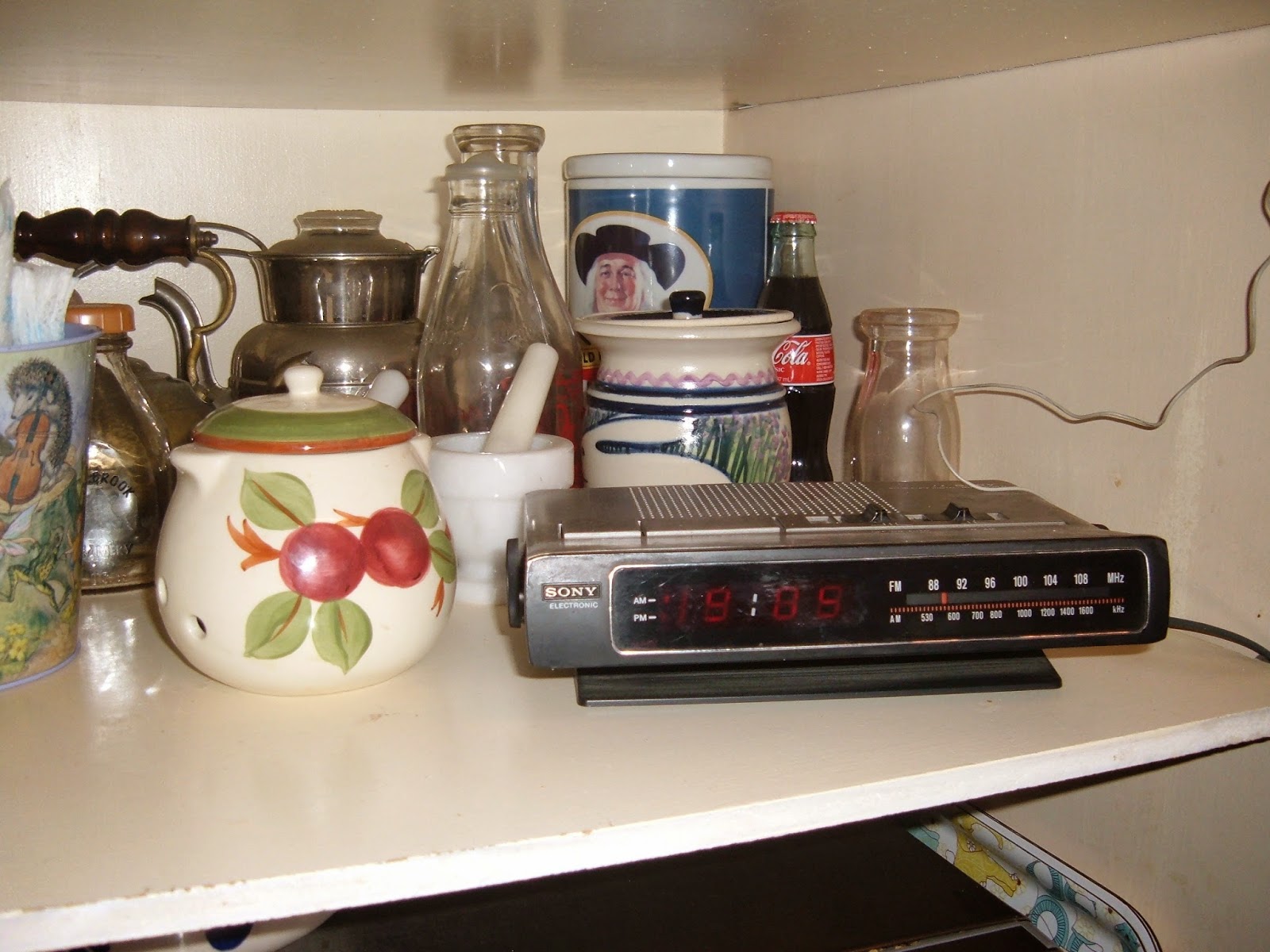 Clock #6
The other kitchen clock, not easy to set in fact I would toss it if it was not for the radio.
Now back through the swinging door, out through the dining room and into the Nursery.
Tick Tock! 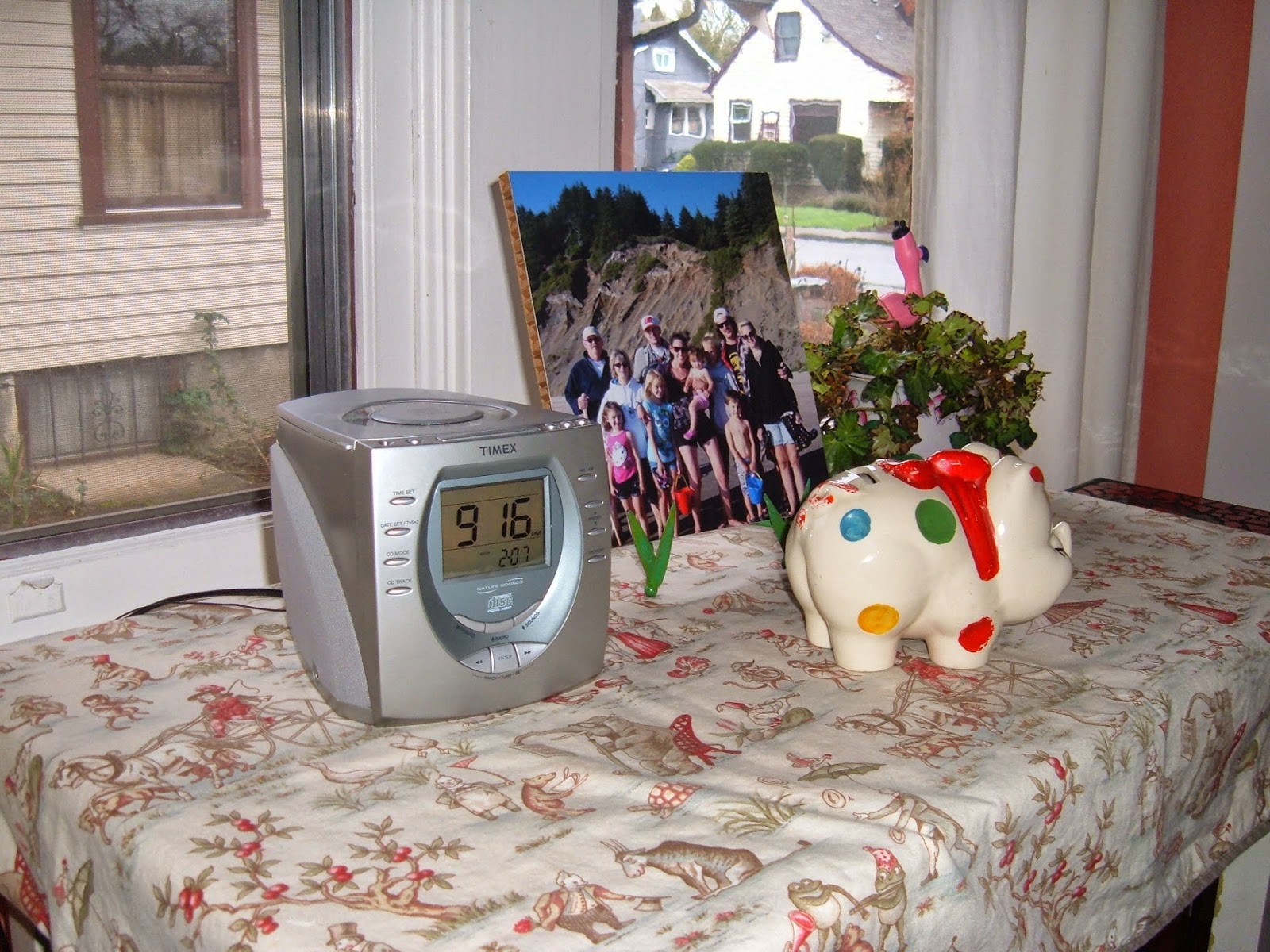 Clock #7
Now this precious  little gem and I do mean gem, holds the secret to sending the "Little Terrorists" into slumber land even after I have loaded them with sugar.....the sound machine. Heart beat, croaking frogs, creaking crickets or a nice gentle babbling brook. A must have for all MeMa's who have Poppi's that think nothing of serving cake and ice cream for breakfast....it's dairy!
Tick Tock! 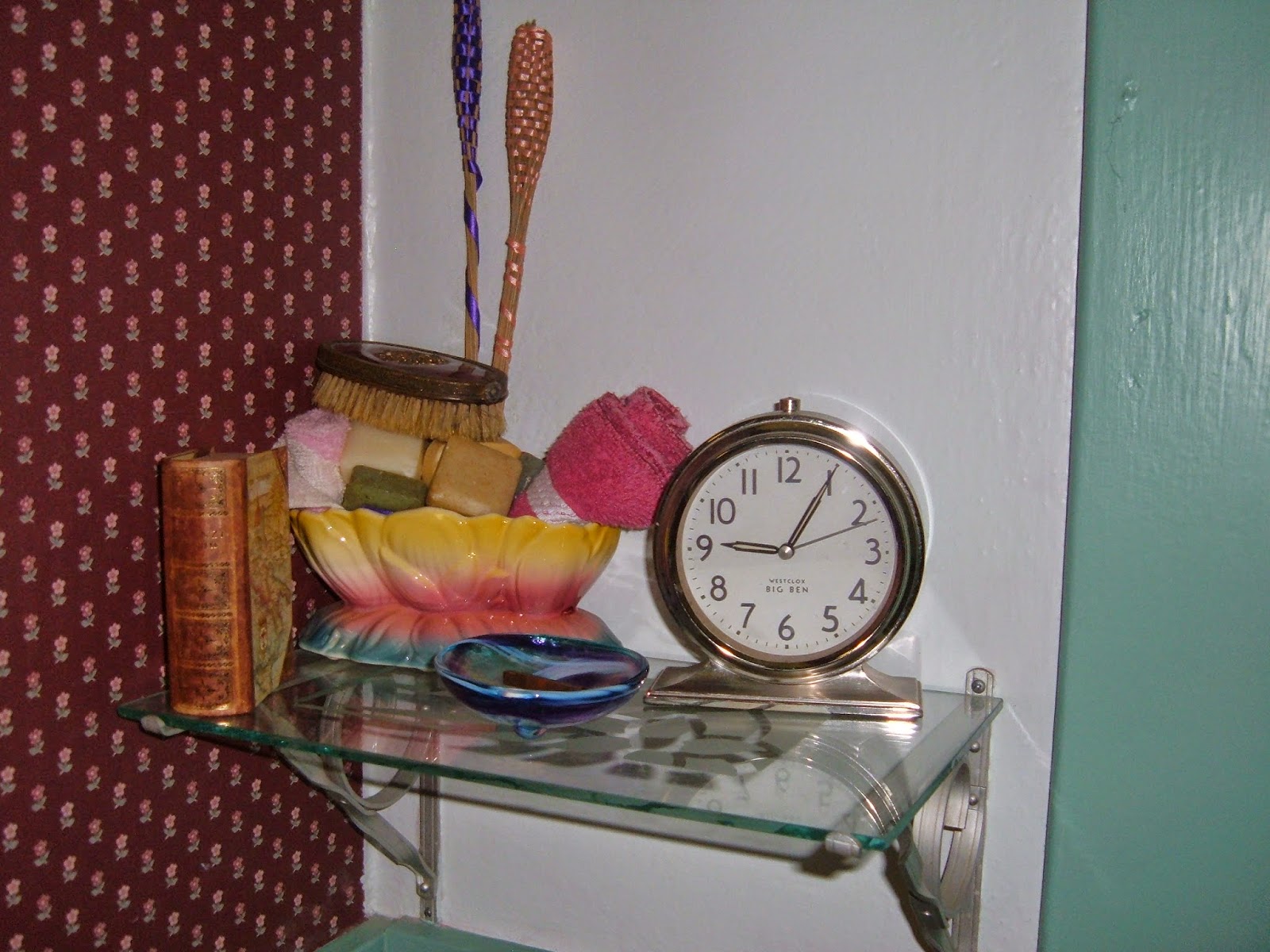 Clock #8
Next stop the ladies room clock "Big Ben"
Tick Tock!
At the end of the hall, the Master Bedroom 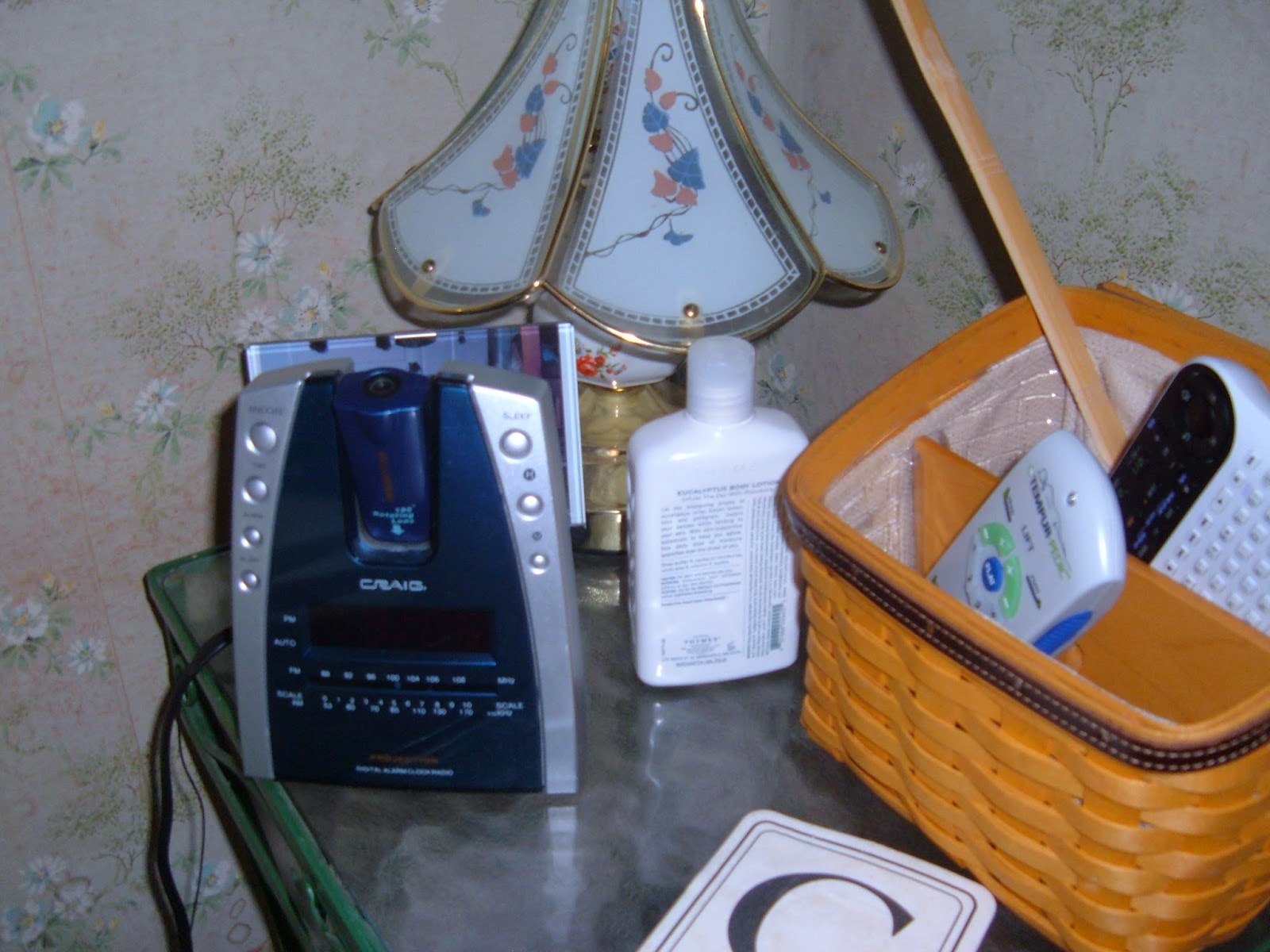 Clock #9
MeMas clock is a wonder of the modern world that is beyond me. It is the most multi-functioning marvel that I have ever seen, it even puts the time on the ceiling for when one can't sleep and it will glare the time at you in big red numbers reminding one that they only have so much more time before the alarm goes off. Rotten bastard clock! 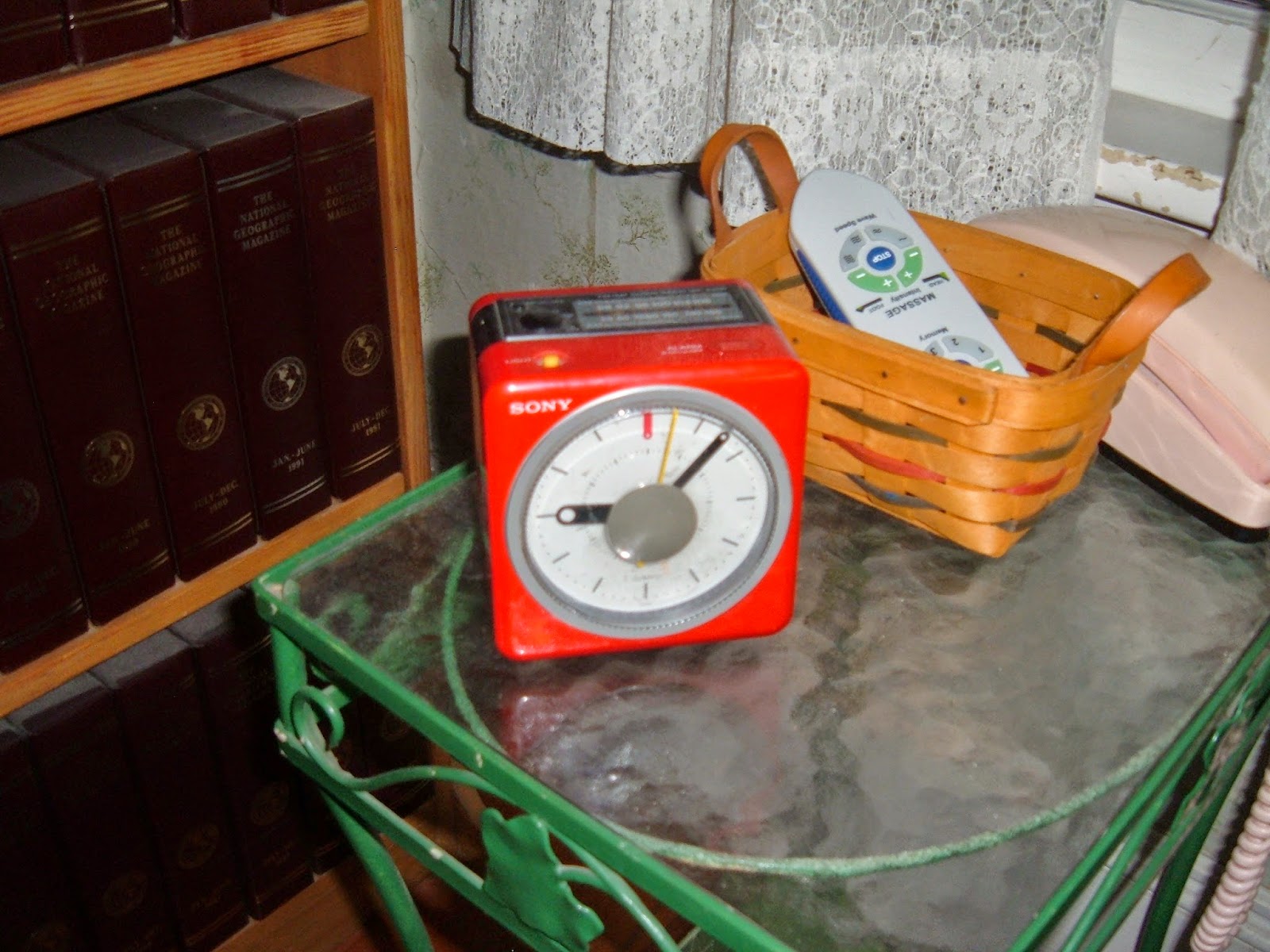 Clock #10
My alarm clock, the one that goes off after I roll over and stare up at the red numbers on the ceiling.
Tick Tock! 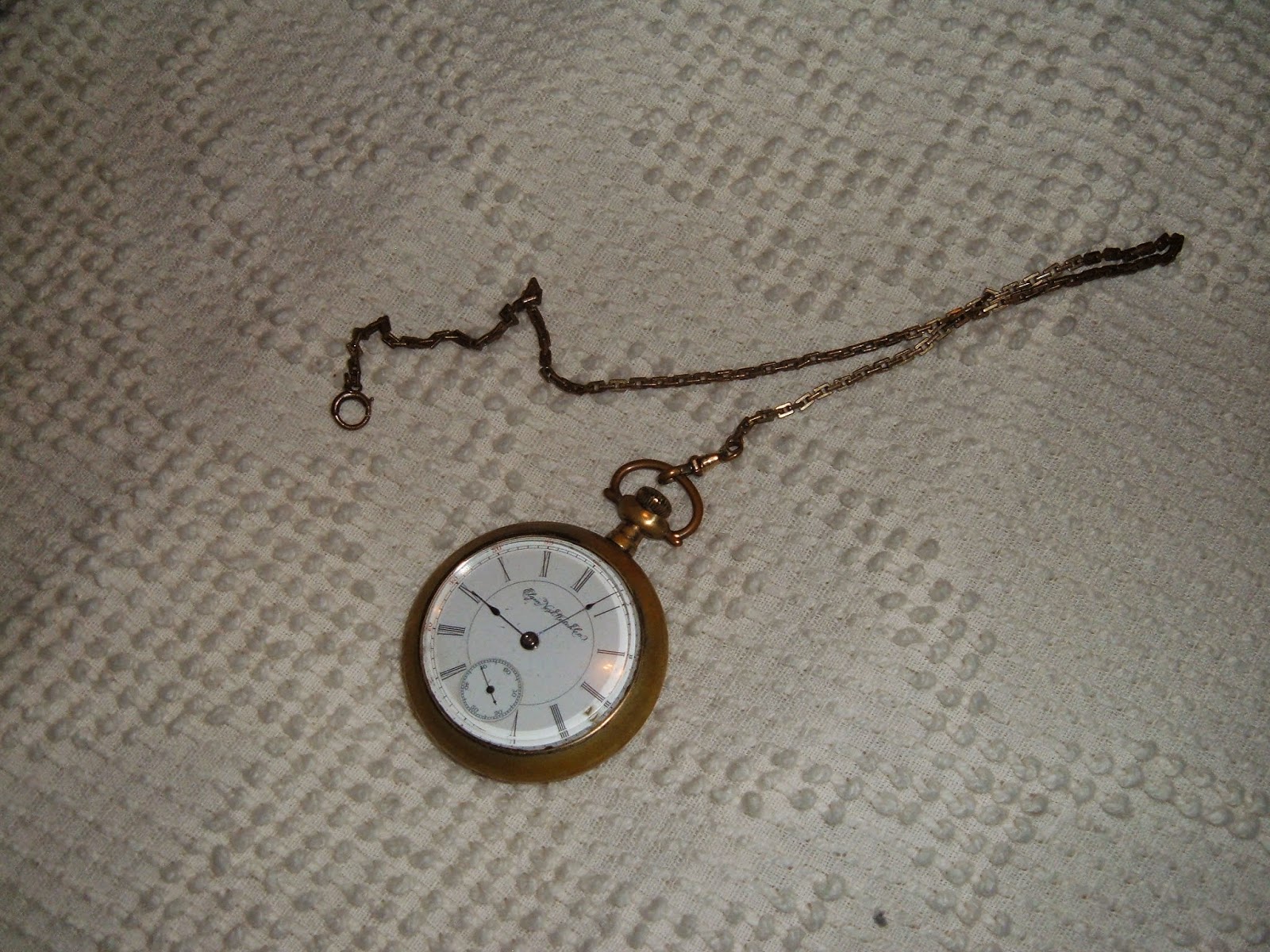 Clock #11
My gold pocket watch.
Now back out to the hall and up 15 steps
Tick Tock! 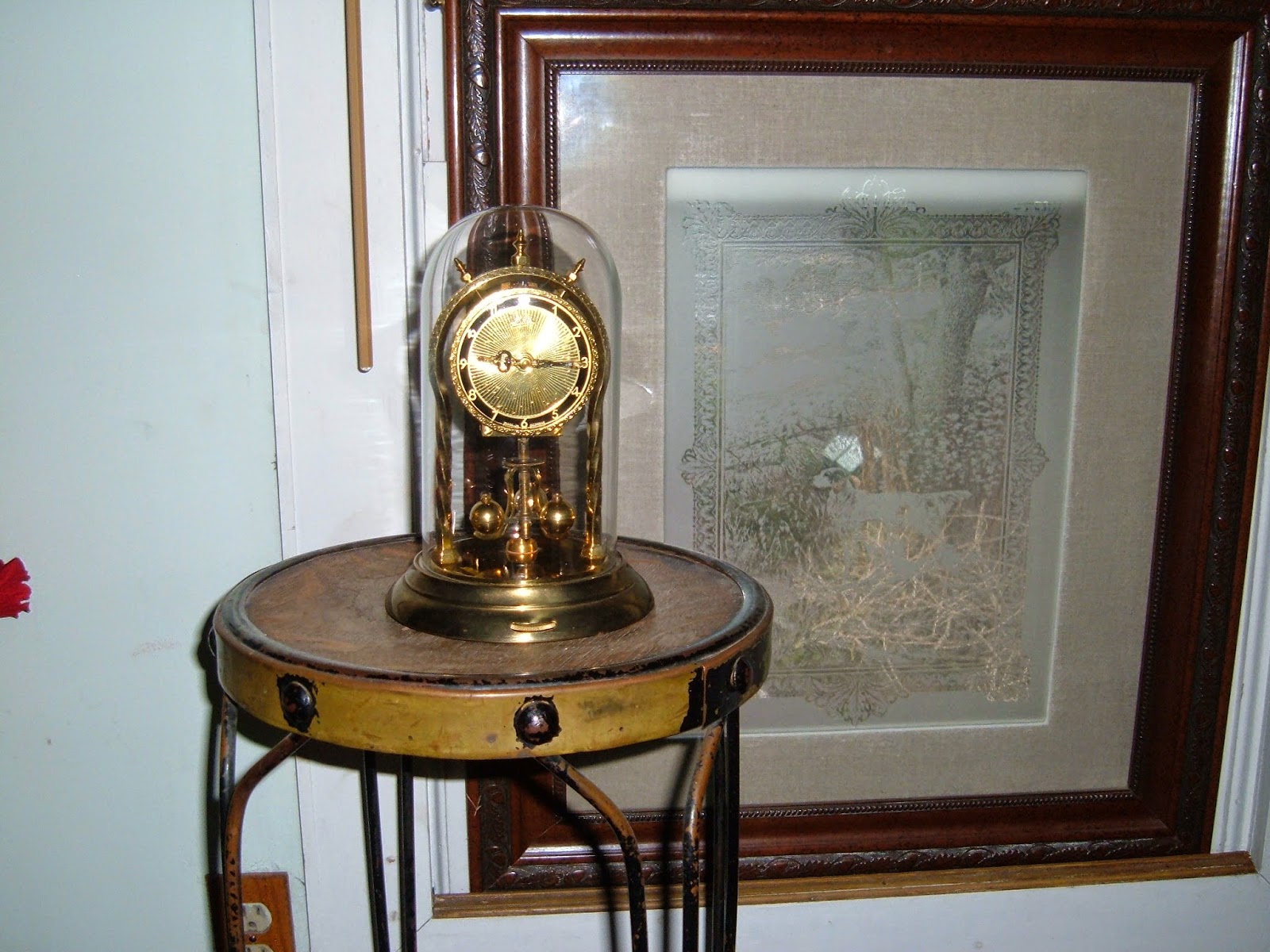 Clock #12
My parent's anniversary clock, After carefully removing the dome, you slide the the lock down over the wire that the pendulum hangs from then you set the time by only moving the minute hand never the hour. So you can see how this would be very time consuming if setting clock back an hour.
Now down the hall to the happiest room at the Manor, the "Mickey Room" 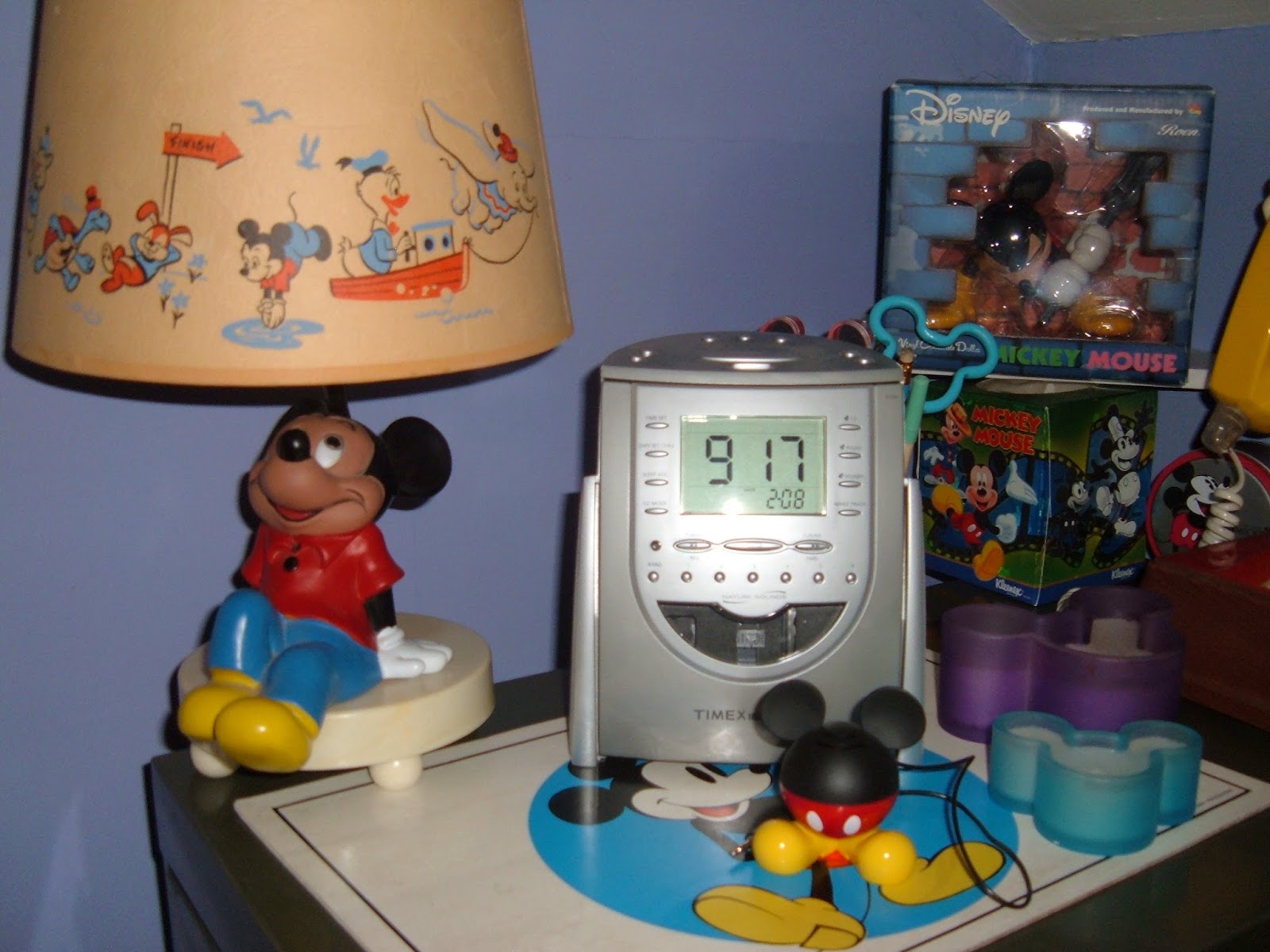 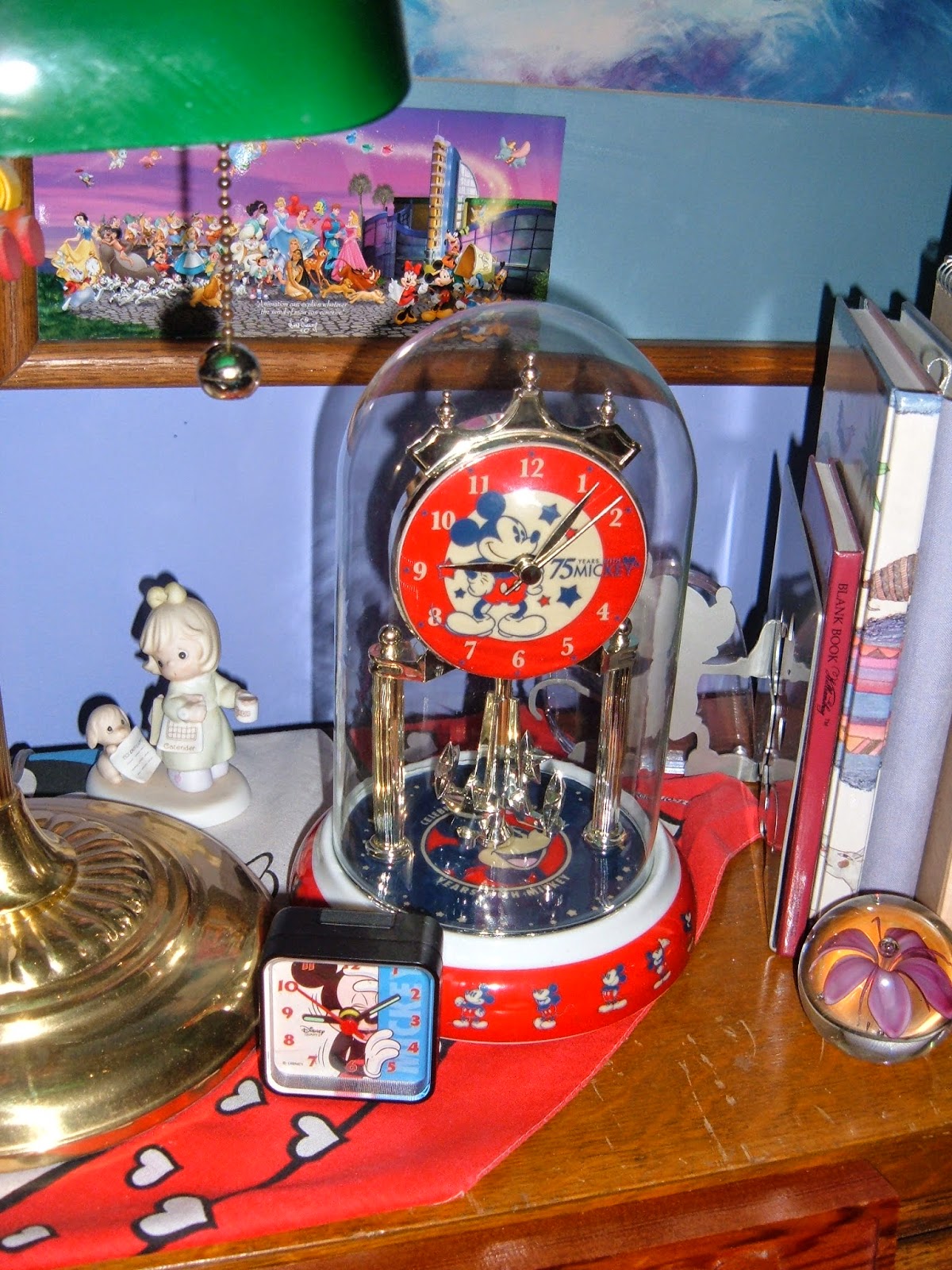 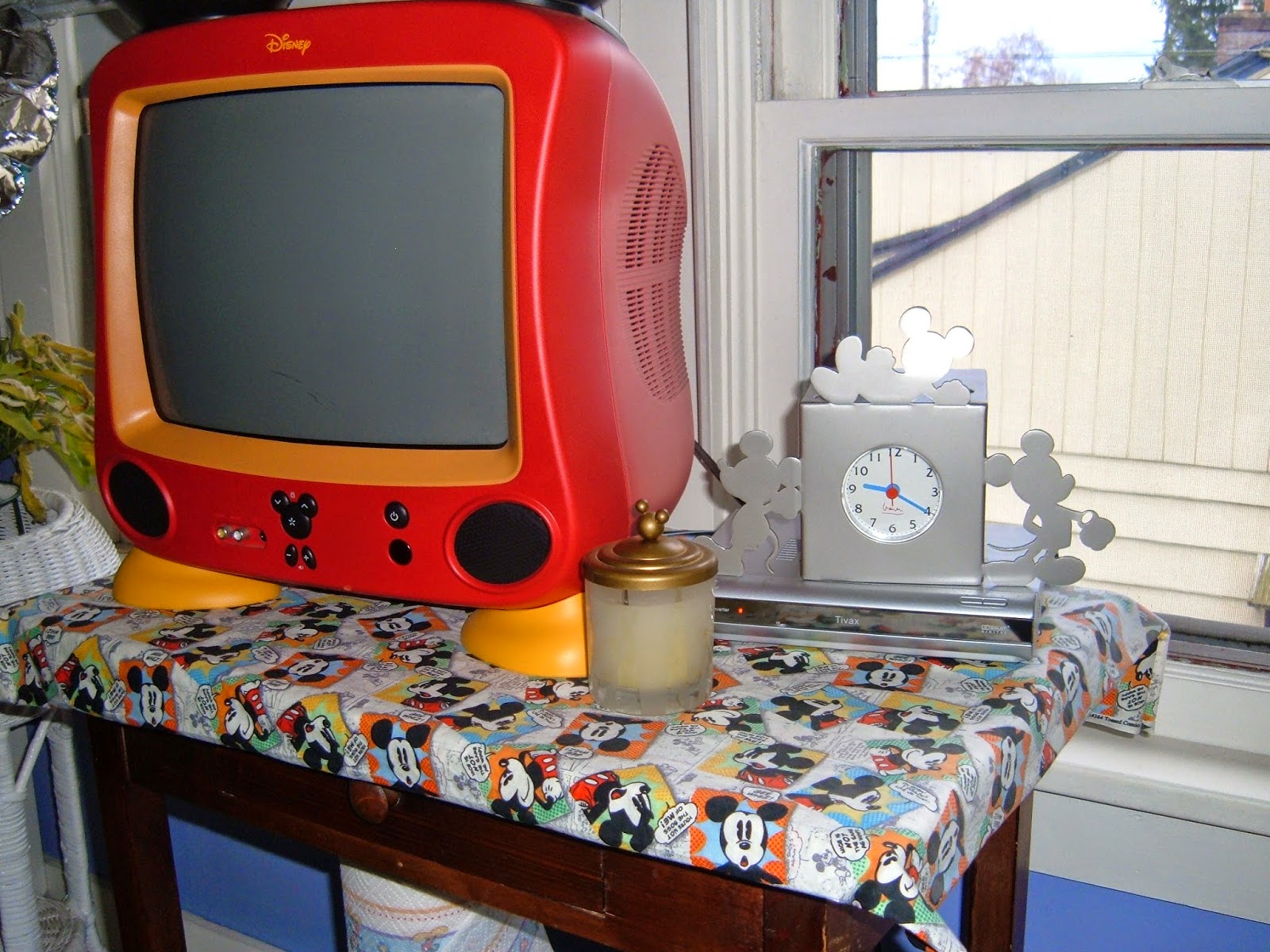 Clock #16
Another Mickey clock next to a Mickey television 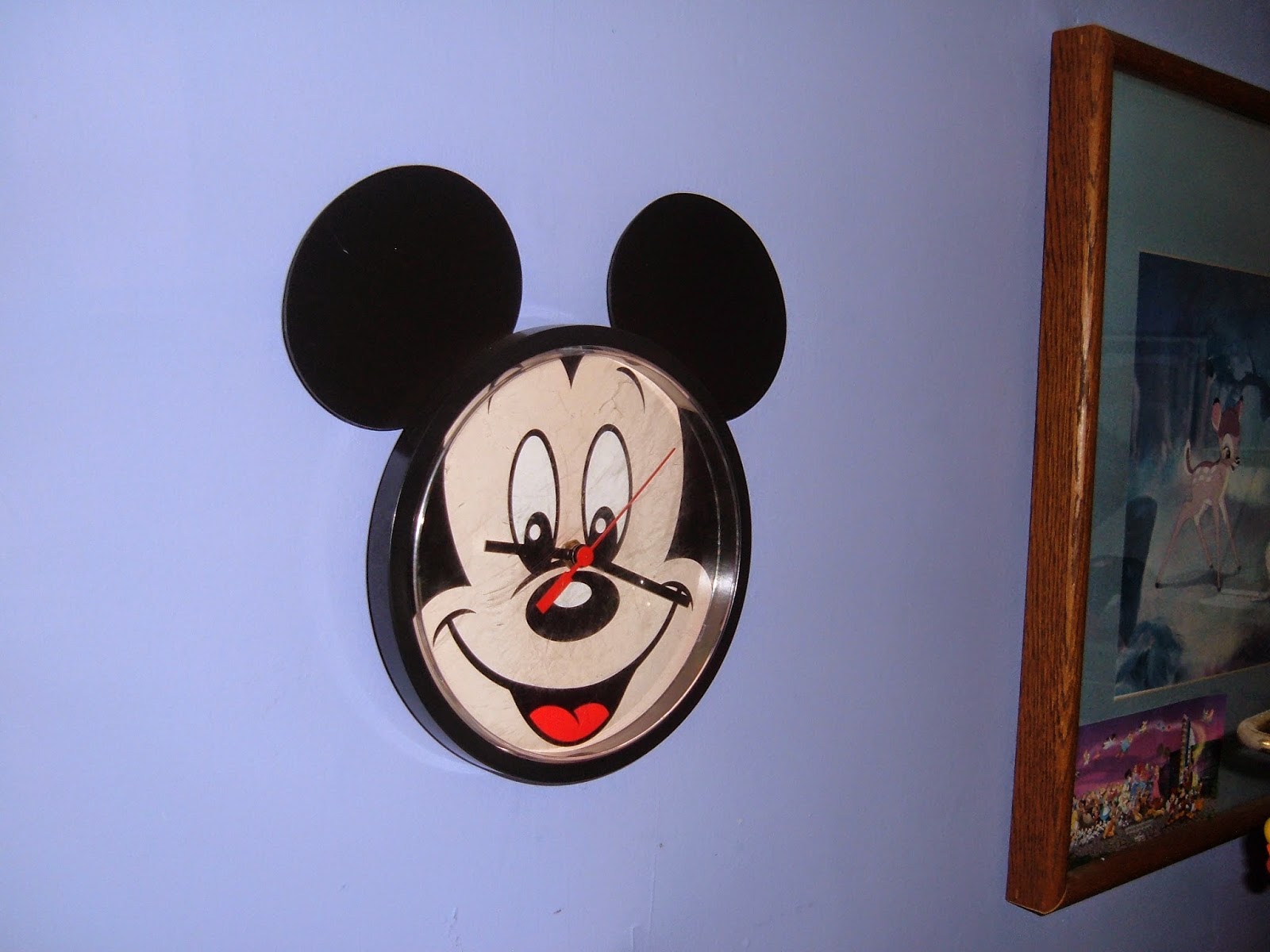 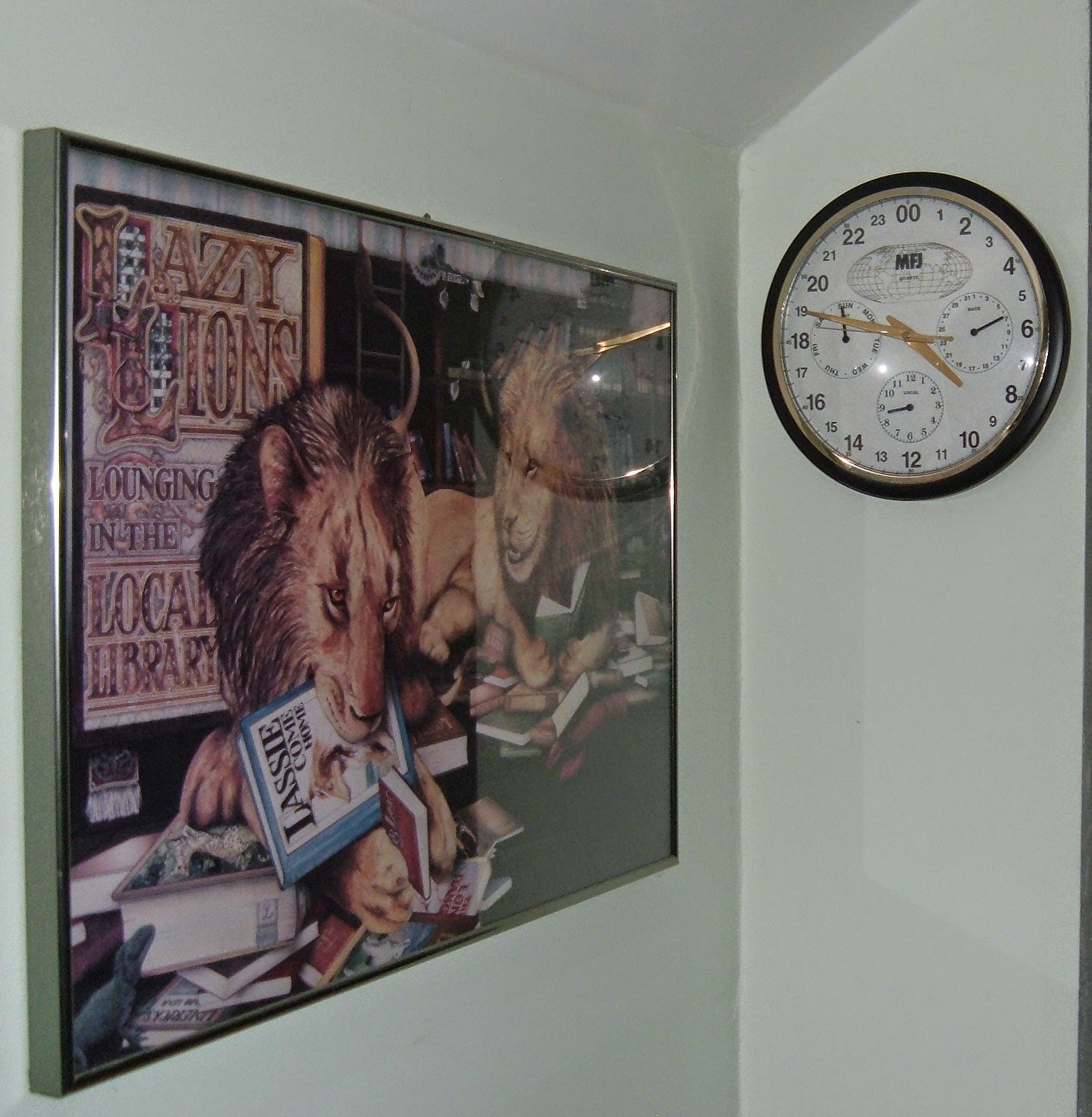 Clock #18
Out of the Mickey room and into the library you will find one of the most confusing clocks to set let alone read....good luck!
Straight through the library and into the front guest room.
Tick Tock! 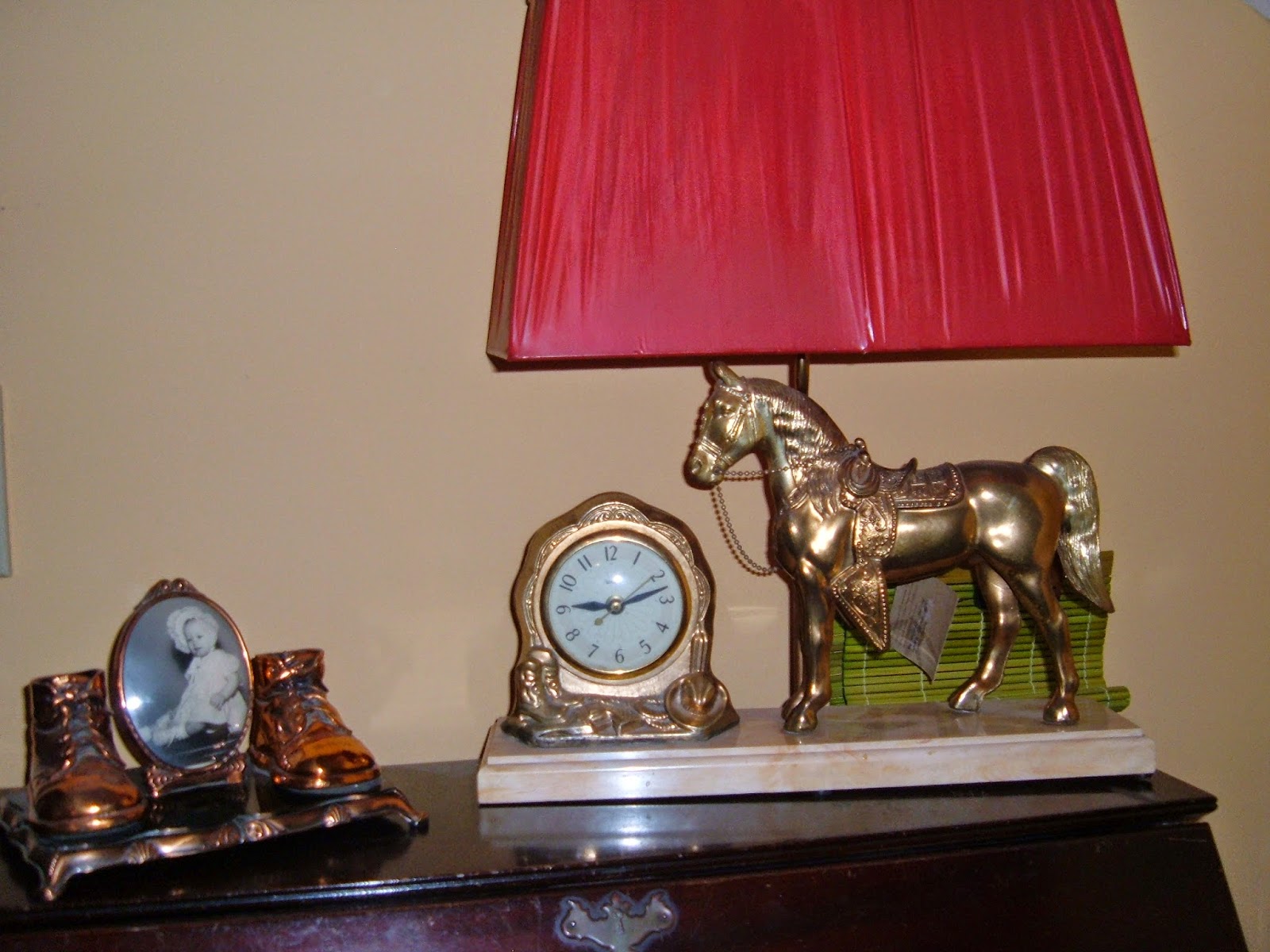 Clock #19
This little gem from the 1940's could be a runner-up in an ugly lamp contest but is a cherished relic that belonged to MeMa's father. 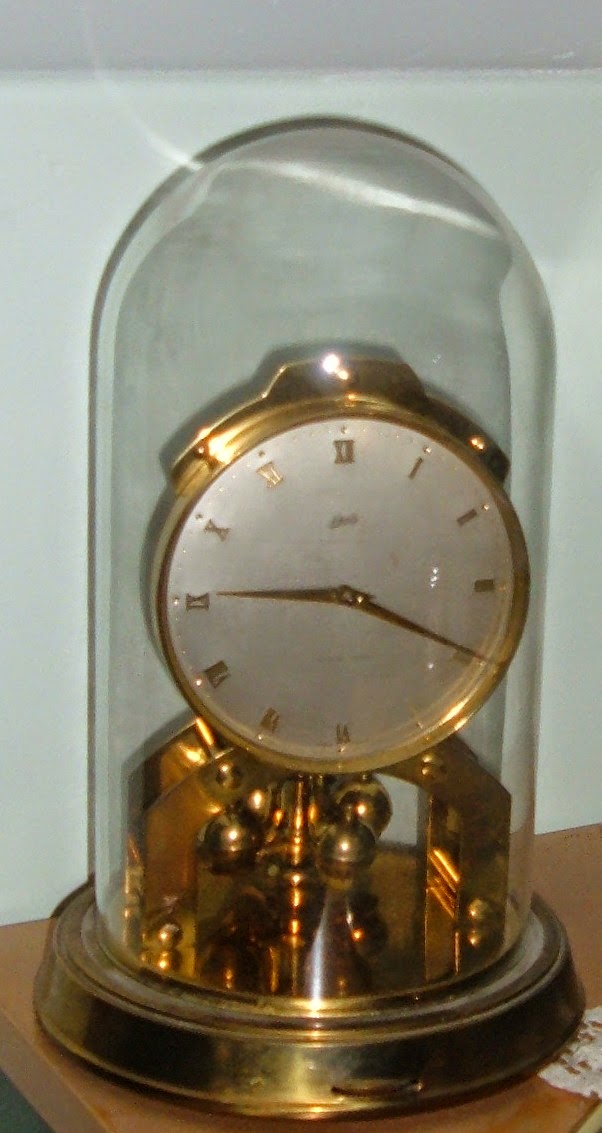 Clock #20
MeMa's parents anniversary clock, once again delicate
Ok, now we zip back down those 15 steps, dash through the dining room and then the kitchen and.....oops, I forgot to mention the fourth floor. Buck it up buttercup its only four steps down to the sunroom.
Tick Tock! 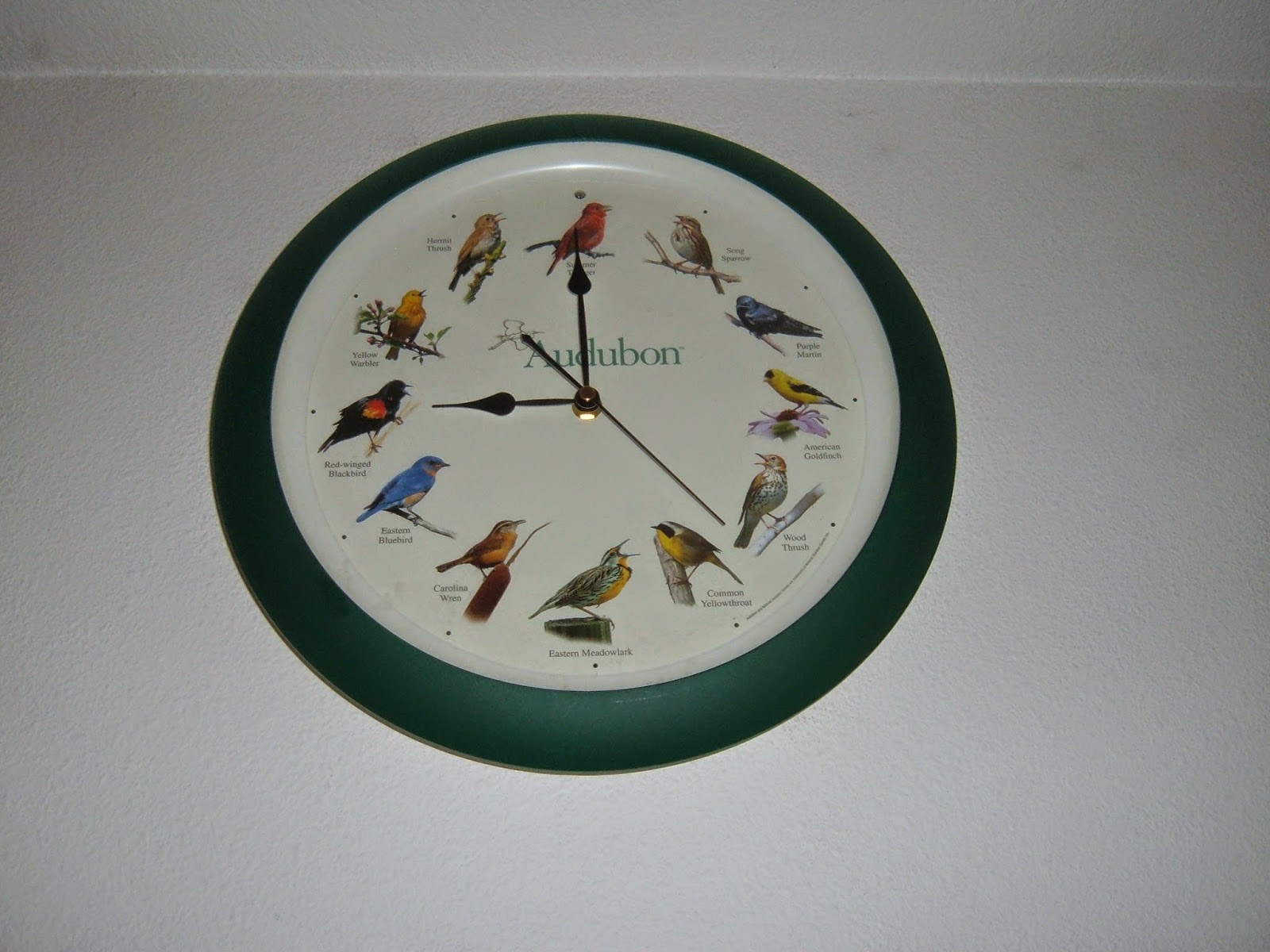 Clock #21
One of my very favorite clocks....the Audubon Bird Clock. A different bird call for every hour struck. But there is a whole process to follow in order to get the bird call to match each photo.....Get it right sir the instructions are on the back.
Tick Tock! 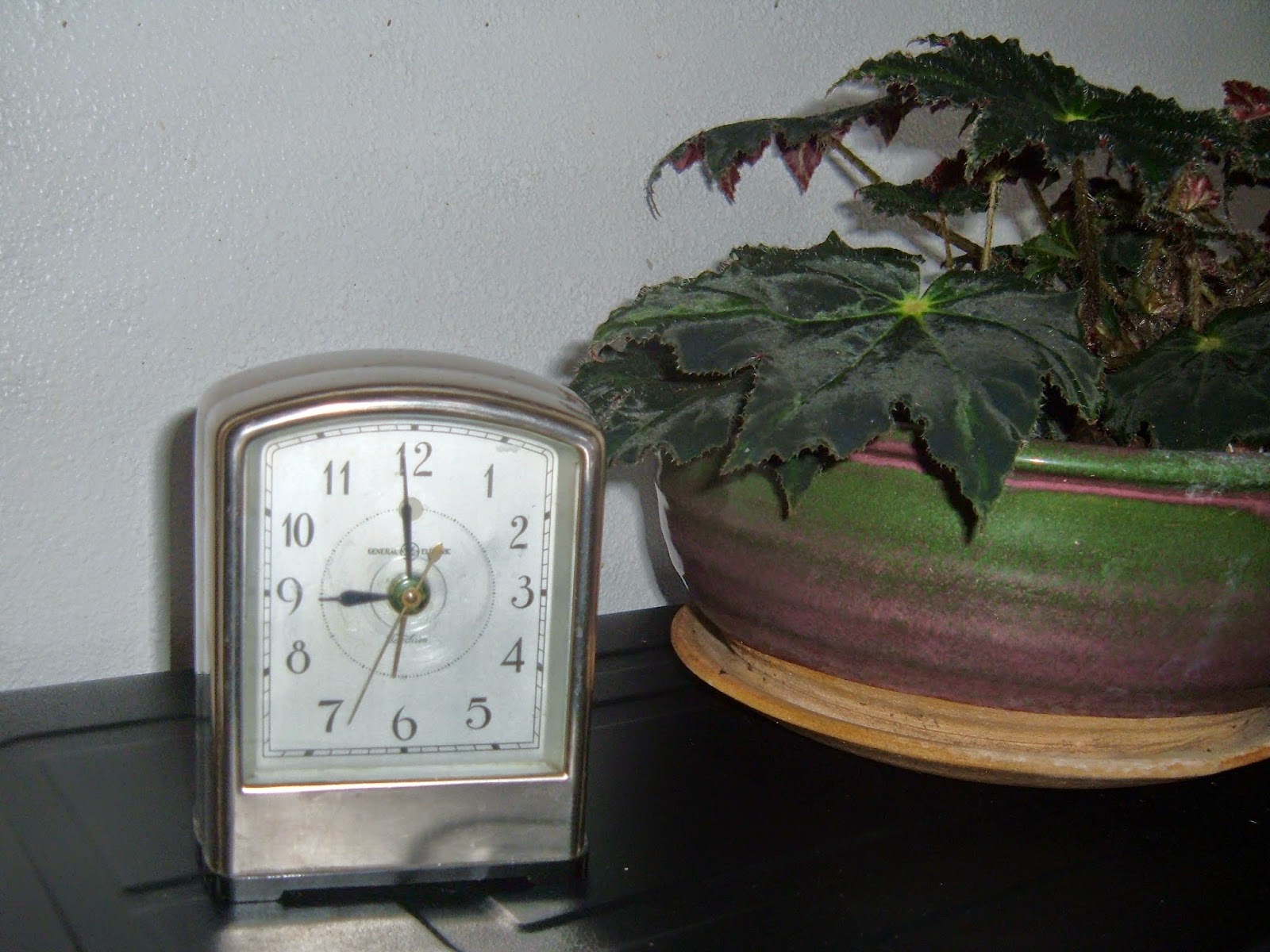 Clock #22
And the second clock in the sunroom is this charming but heavy 1950's little electric travel alarm clock by General Electric.

Now on to the final level down the 12 steps to the theatre room. Clock #23
OK I'm taking it easy on ya here it is the only satellite clock so it sets itself while giving the latest in temperature and weather.
Tick Tock!! 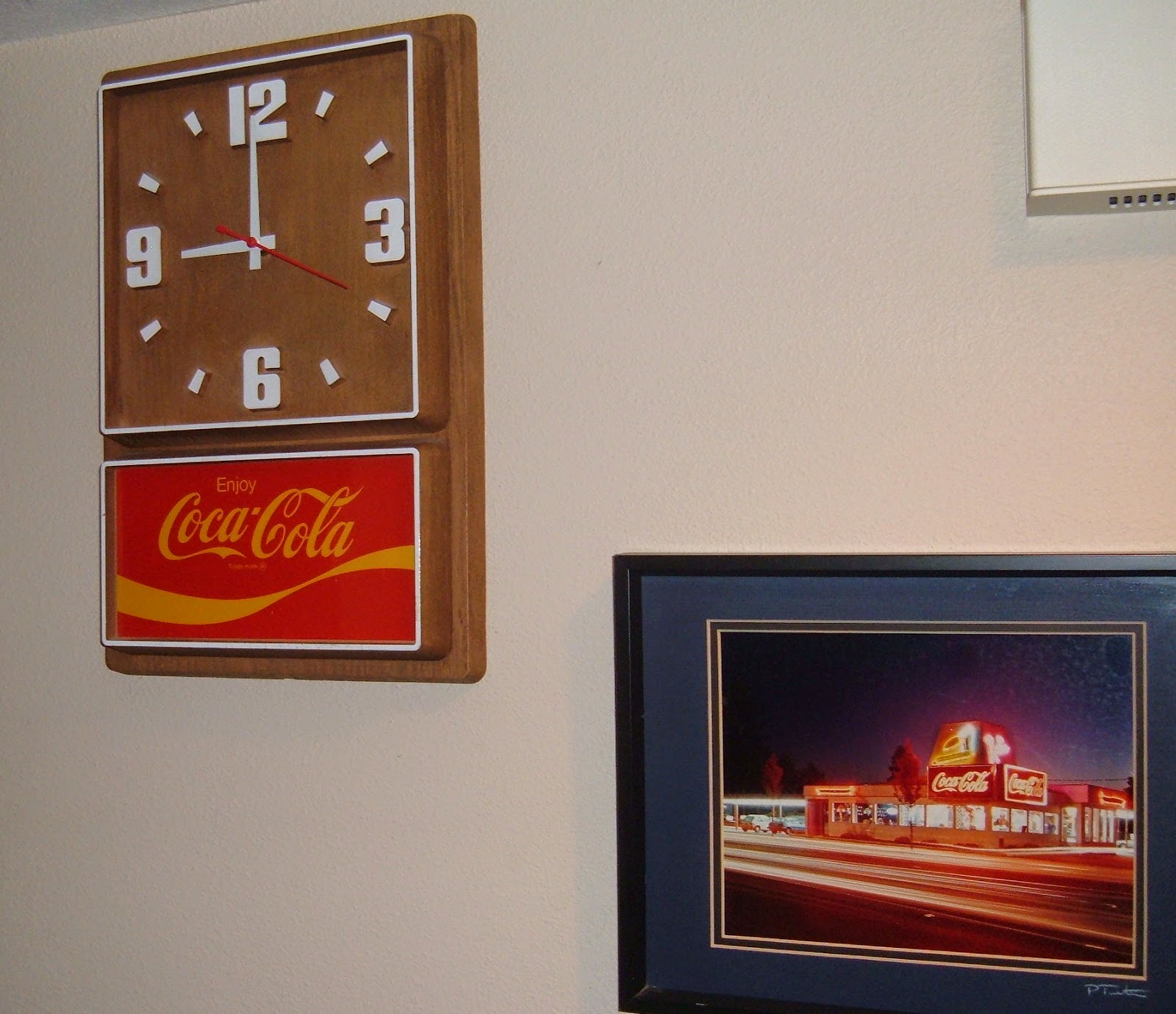 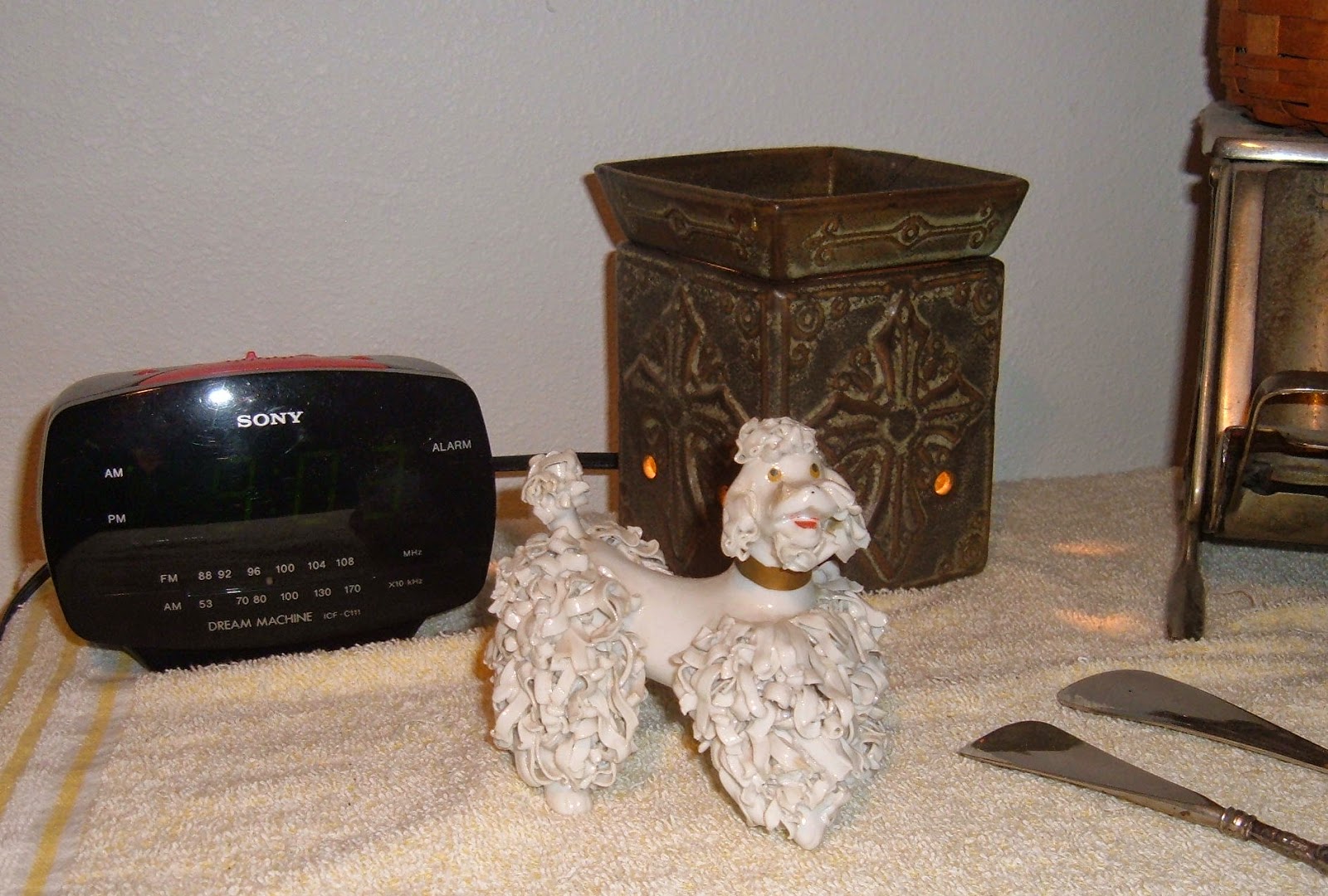 Clock #25
Keeping proper time is an integral part of my business so it is imperative that this clock in my dressing room is set exact.
Tick Tock! 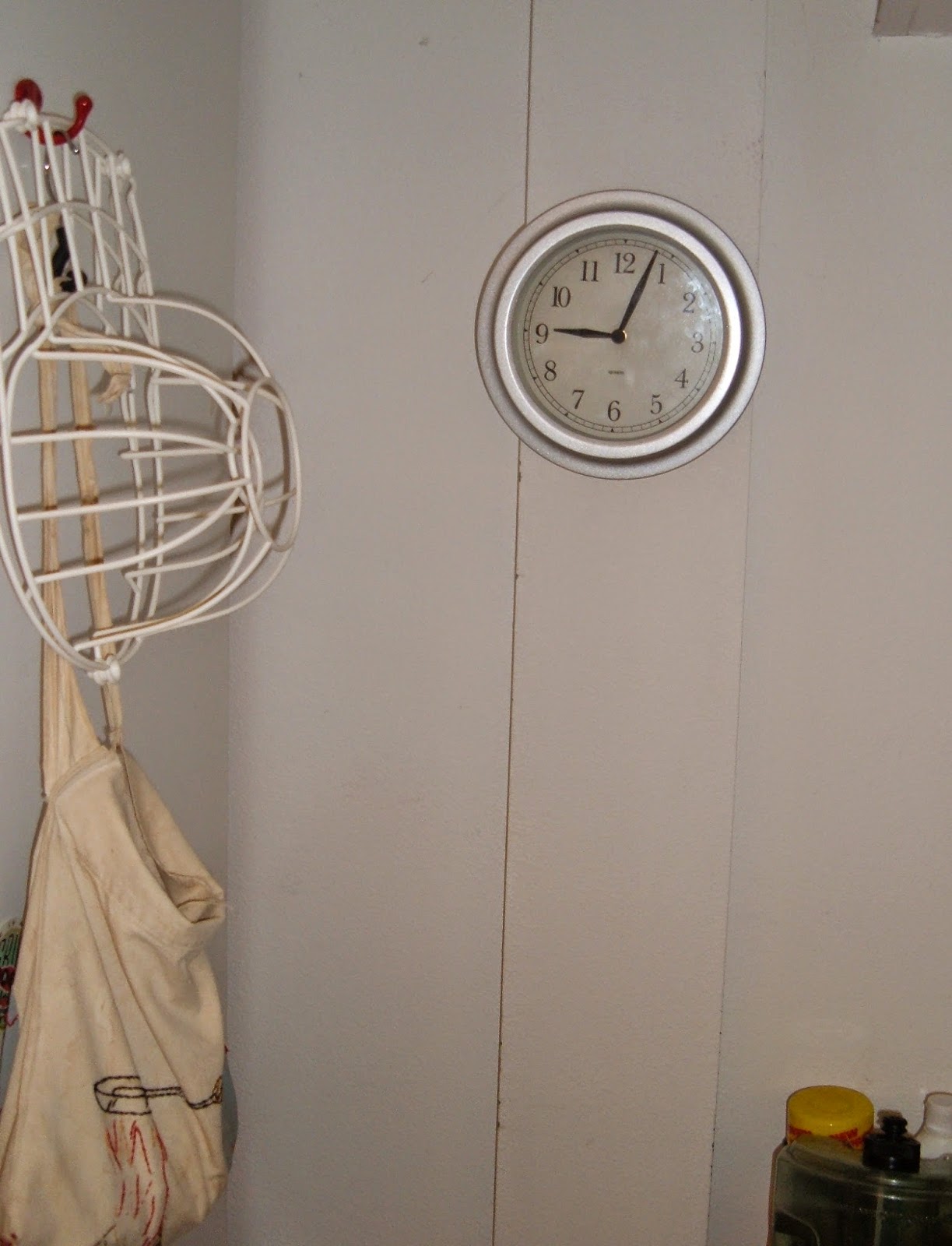 Clock #26
Nip into the laundry room and your done with this level....so back up 12 steps, through the sunroom and into the garage and head to my shop. 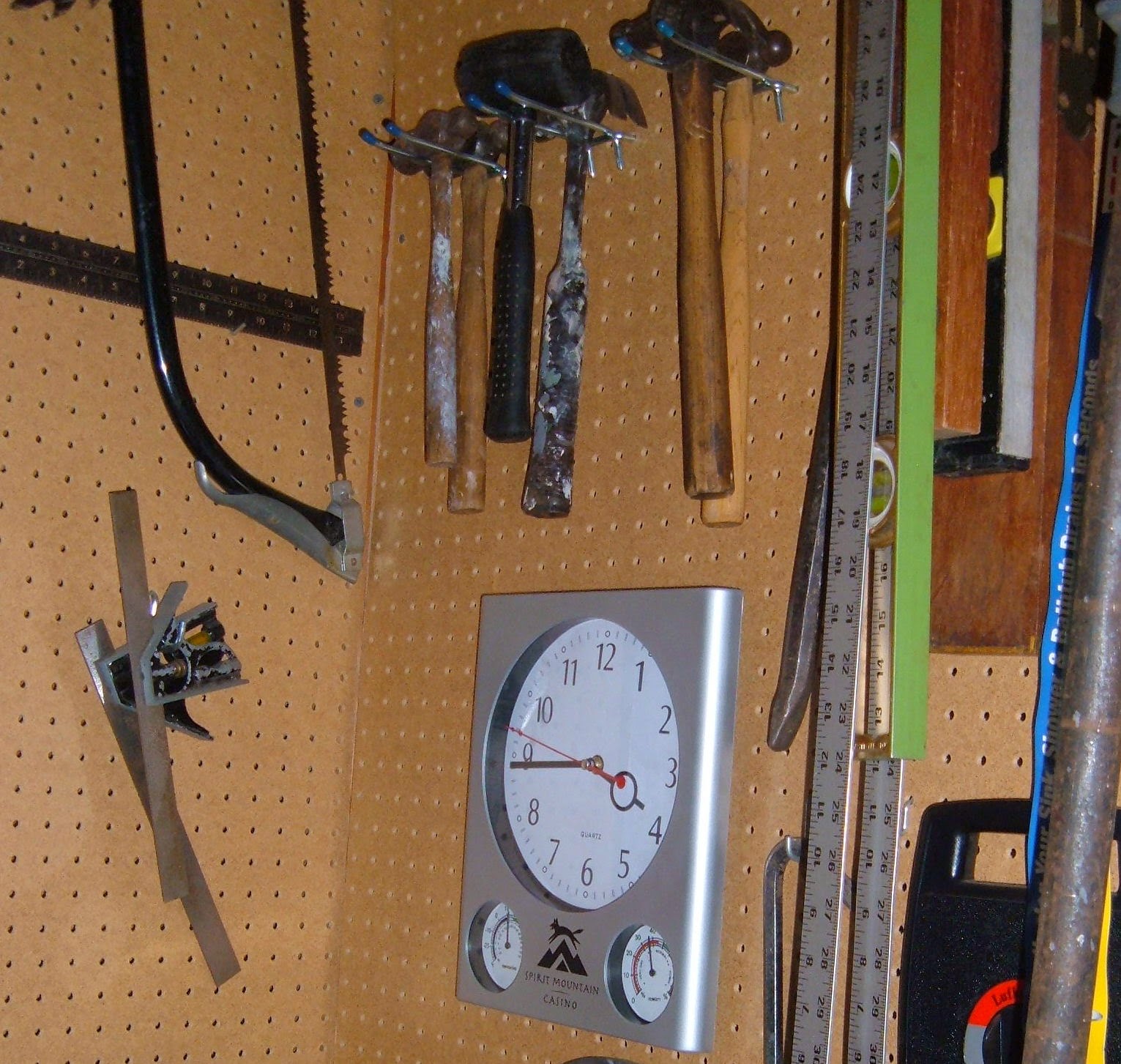 Clock #27
I like to put in a bit of time out in the shop but never shall I miss cocktail hour.
Tick Tock! 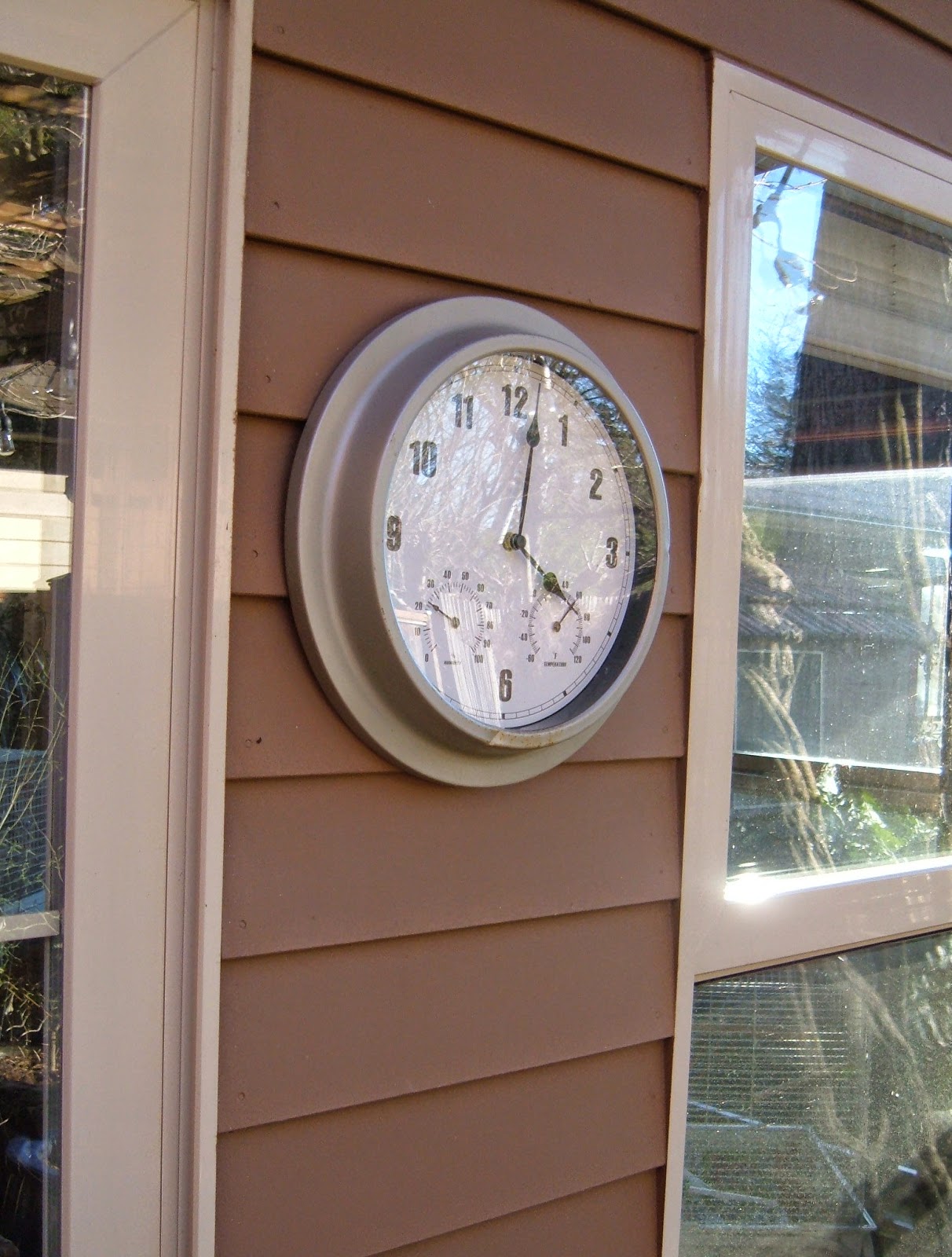 Clock #28
Now you can exit the shop through the back door dash through the center garden nip across the foot bridge over the pond and you will find a very large clock with bold numbers. That would be the
"last call" clock for any guests that choose to ignore proper party etiquette.
Now out the wooden gate to the front porch and please stick to the path else the Crazy Cat Lady will spend the next 20 minutes hissing, spitting and getting her litter all in a fuss about strangers running up her side of the property.
Tick Tock! 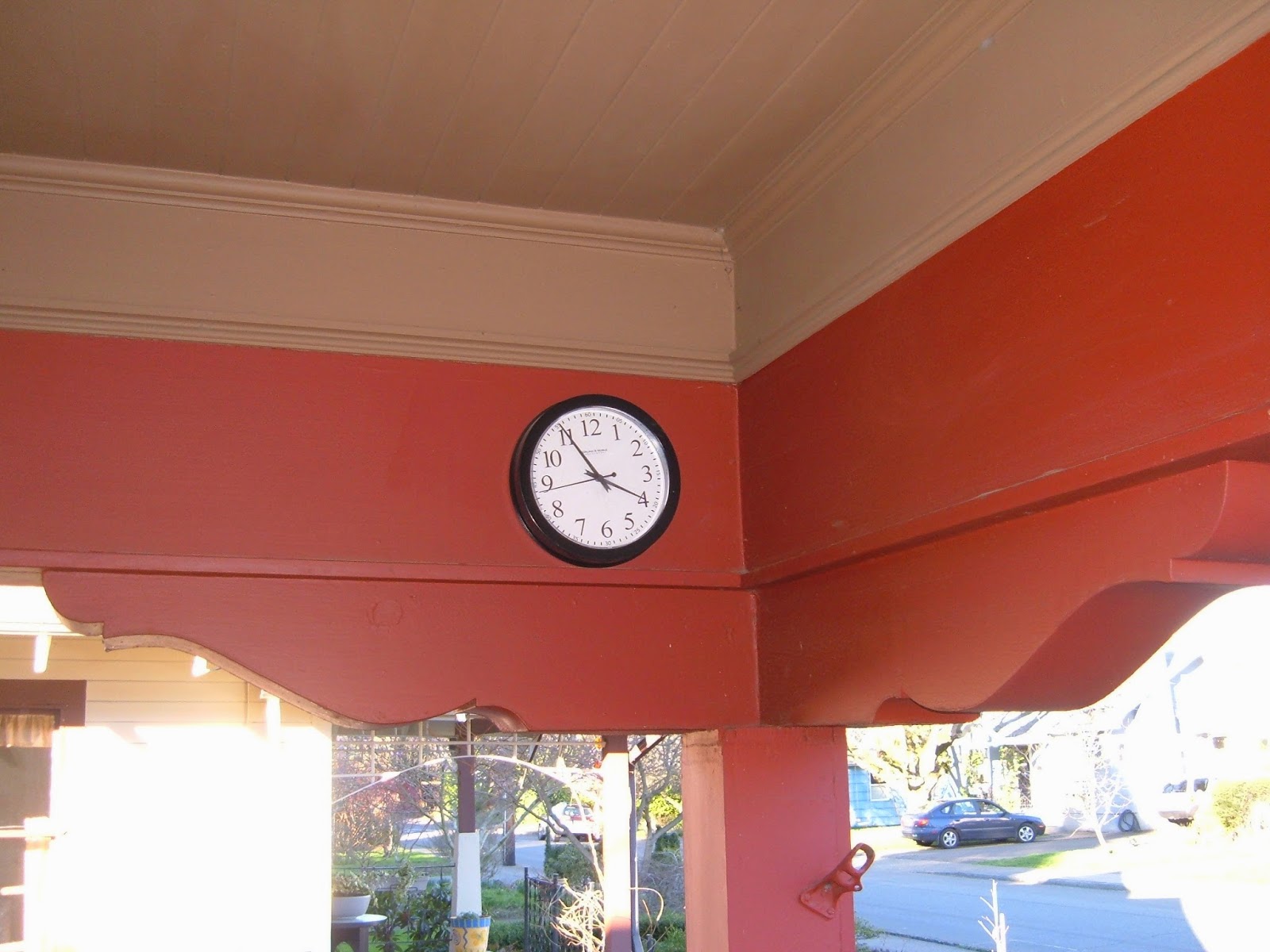 Clock #29
The front porch clock used to be the laundry room clock until MeMa bought the present one. When I stuck this one in the charity box it magically re-appeared on the front porch.
And then there are the clocks in the three cars out there in the garage that would be
clocks #30, #31 and #32.
Mr. President just to remind you this is a timed event, no time for breaks and dress properly with comfortable shoes. Mr. President maybe we should just get rid of that nasty old "Daylight Savings Time" bunk and just save ourselves a whole lot of work. Just saying!