It has been a such a long time since I posted anything that I was wondering if I would remember my password.....obviously I did.  I took a couple of weeks off and spent a great deal of my children's inheritance.  We have talked about and fretted about having the tile roof removed from Menagerie Manor for several years.  When I say tile, people think I am talking about terracotta barrel tile but in reality it is concrete tile with a color glaze on top.  After thirty nine years sitting up there in all of our northwest weather the glaze has disappeared leaving the exposed concrete which is water absorbent.  Each 9x15 tile weighs six pounds but without the glaze when it rains day after day the water soaked tile almost doubles its weight.  A while back I told our family that if Oregon is hit with a major earthquake to just toss some roses on top of the heap because we would both be under it.

We decided that the company that restructured the sagging porch earlier in the summer would be an excellent choice after getting several bids from other companies.  So Owen from "His Builders" was thrilled to take on this big project.  I decided to stay home from the office to not only monitor the progress but to make available the facilities for the crew members. 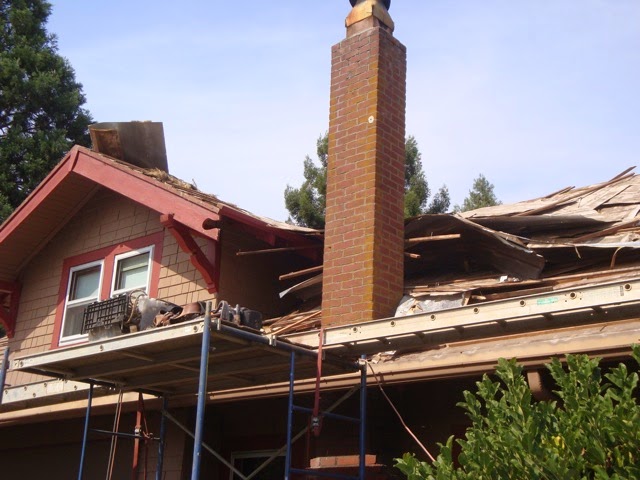 There was no plywood underlayment, only a thin foam board that had a foil moisture barrier on one side, this was also the point of the tear-off that they started looking for damage and dry rot. 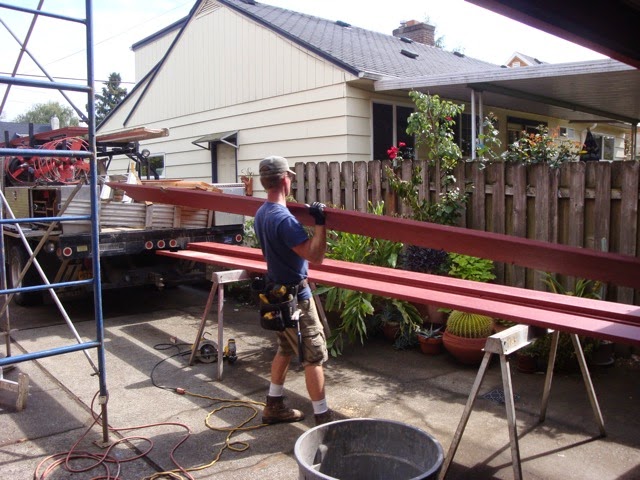 New face boards, painted and ready to be installed. 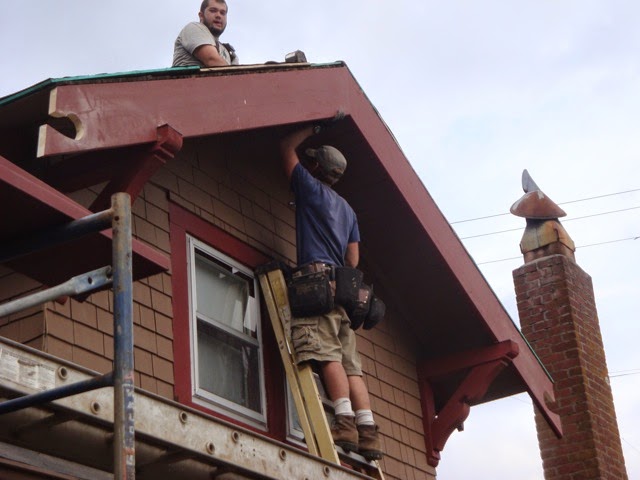 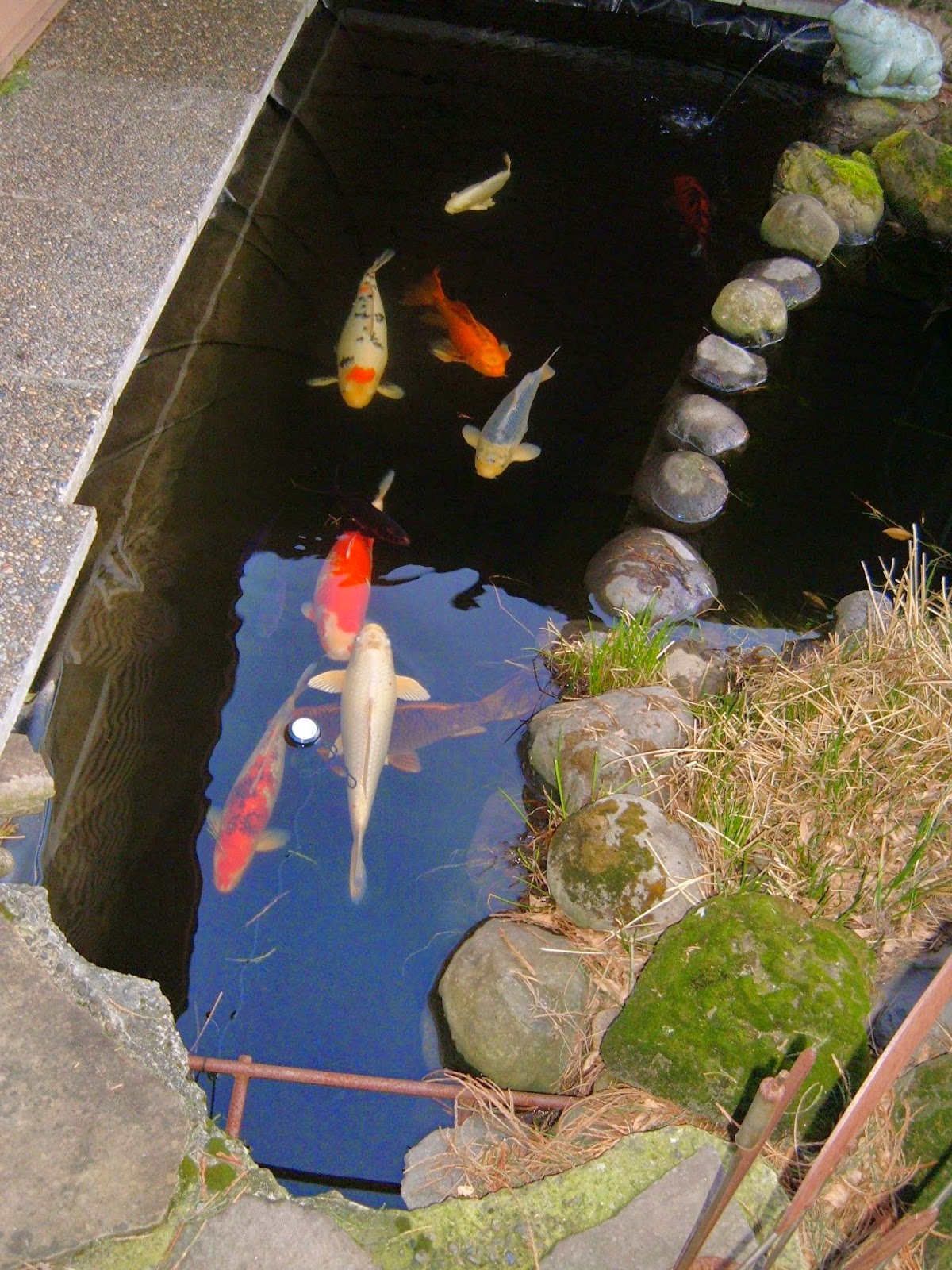 One of our biggest concerns was the overall safety of our Koi fish, so we had it written into the contract that they would build a protective cage over the exposed area of the pond. 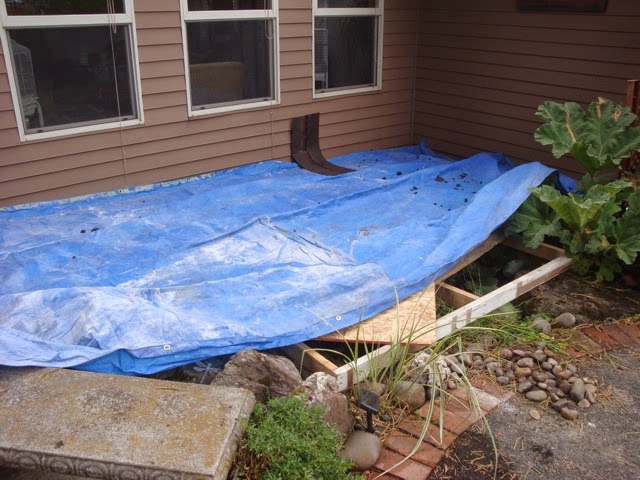 The crew built a wood frame over the pond and then layered plywood and then tarp to make sure the fish were unharmed in this whole process. 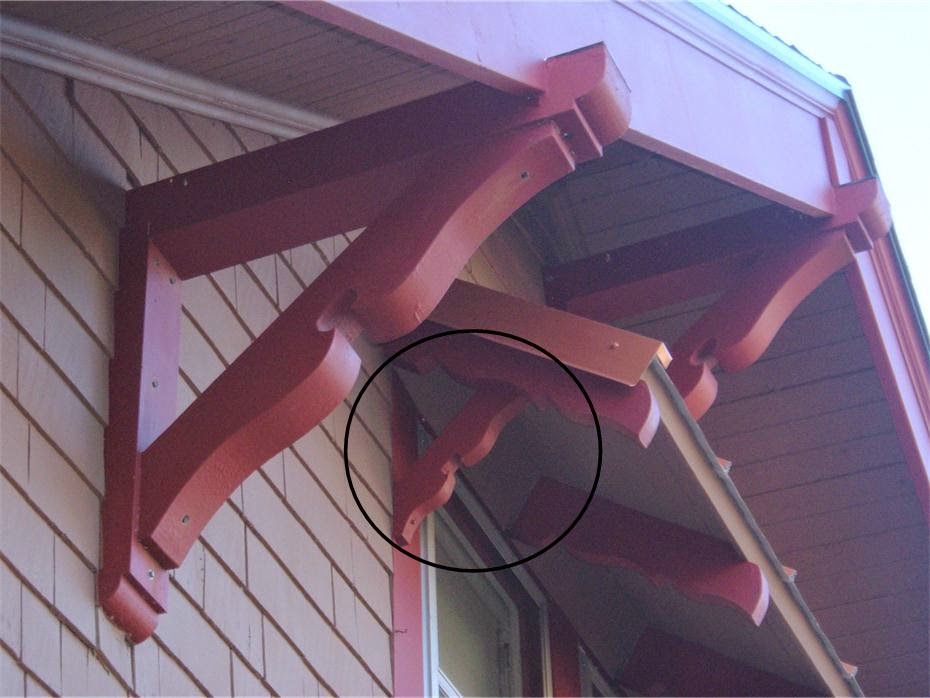 At the front of the house the upstairs dormer window had a tile covered roof over it that had sagged badly the only way to bring it up level was to add braces to each end.
Nathan carved them out to look just as though they had been part of the house since 1916 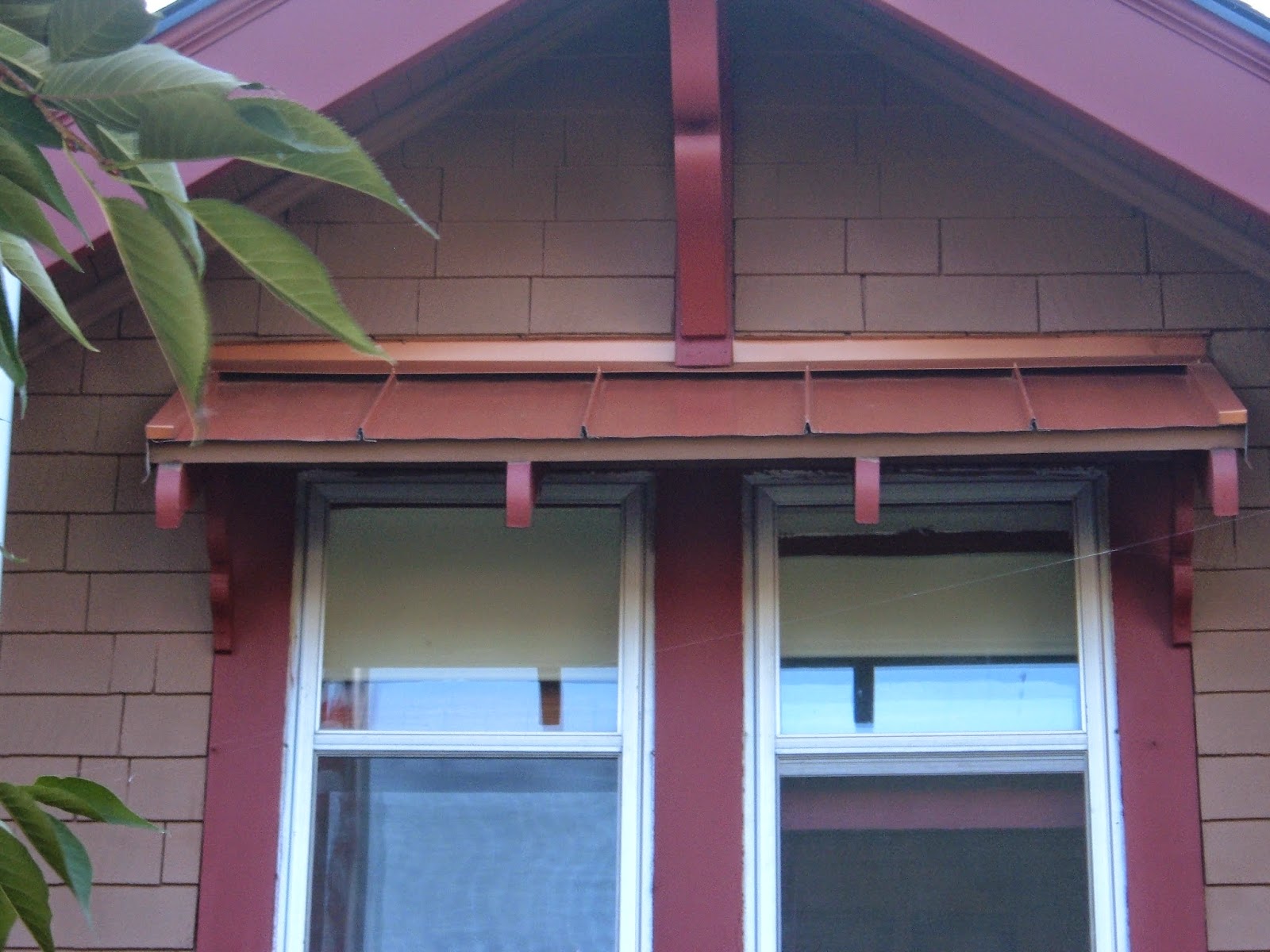 They replaced the tile with this beautiful "Copper Penny" 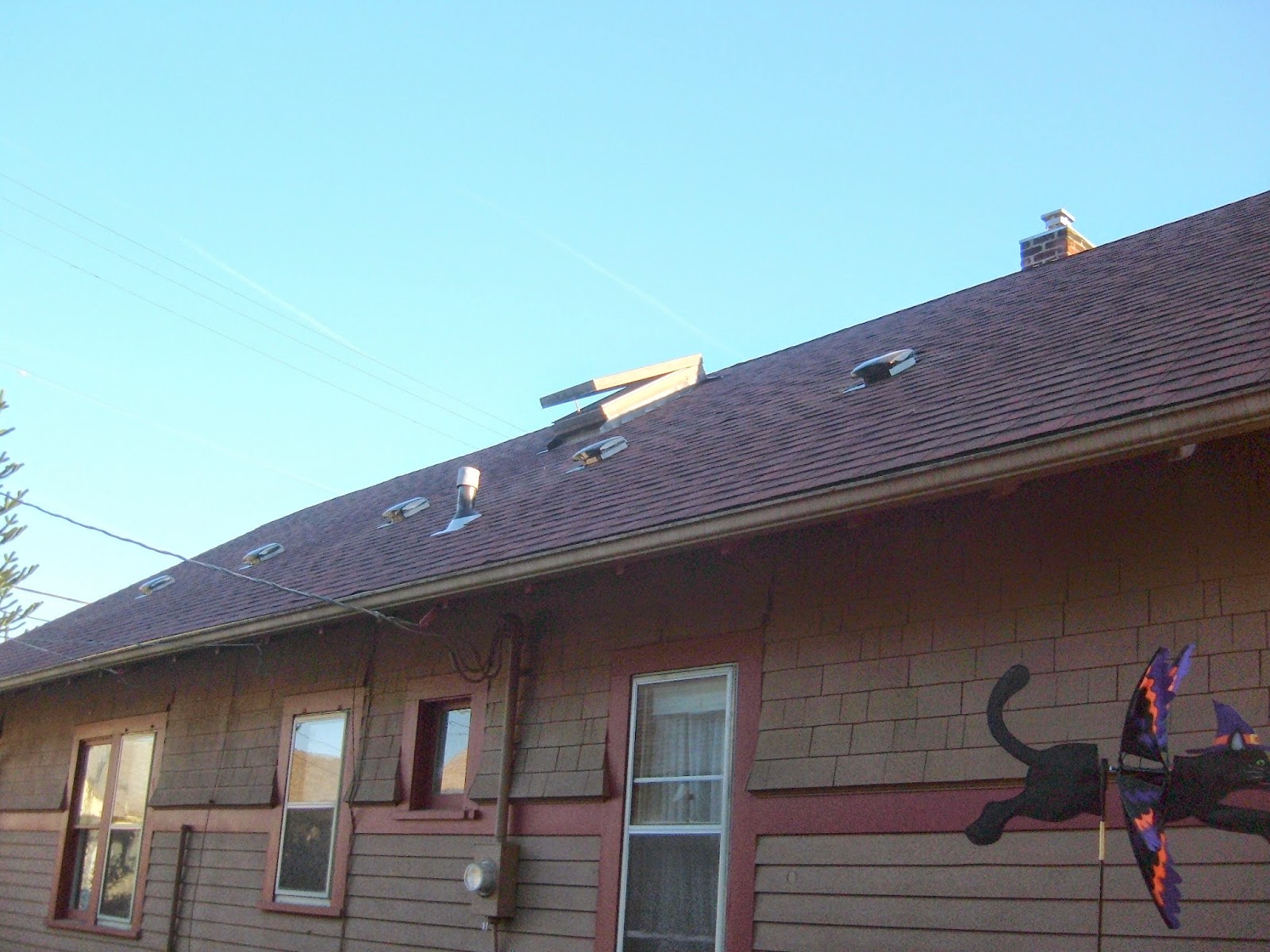 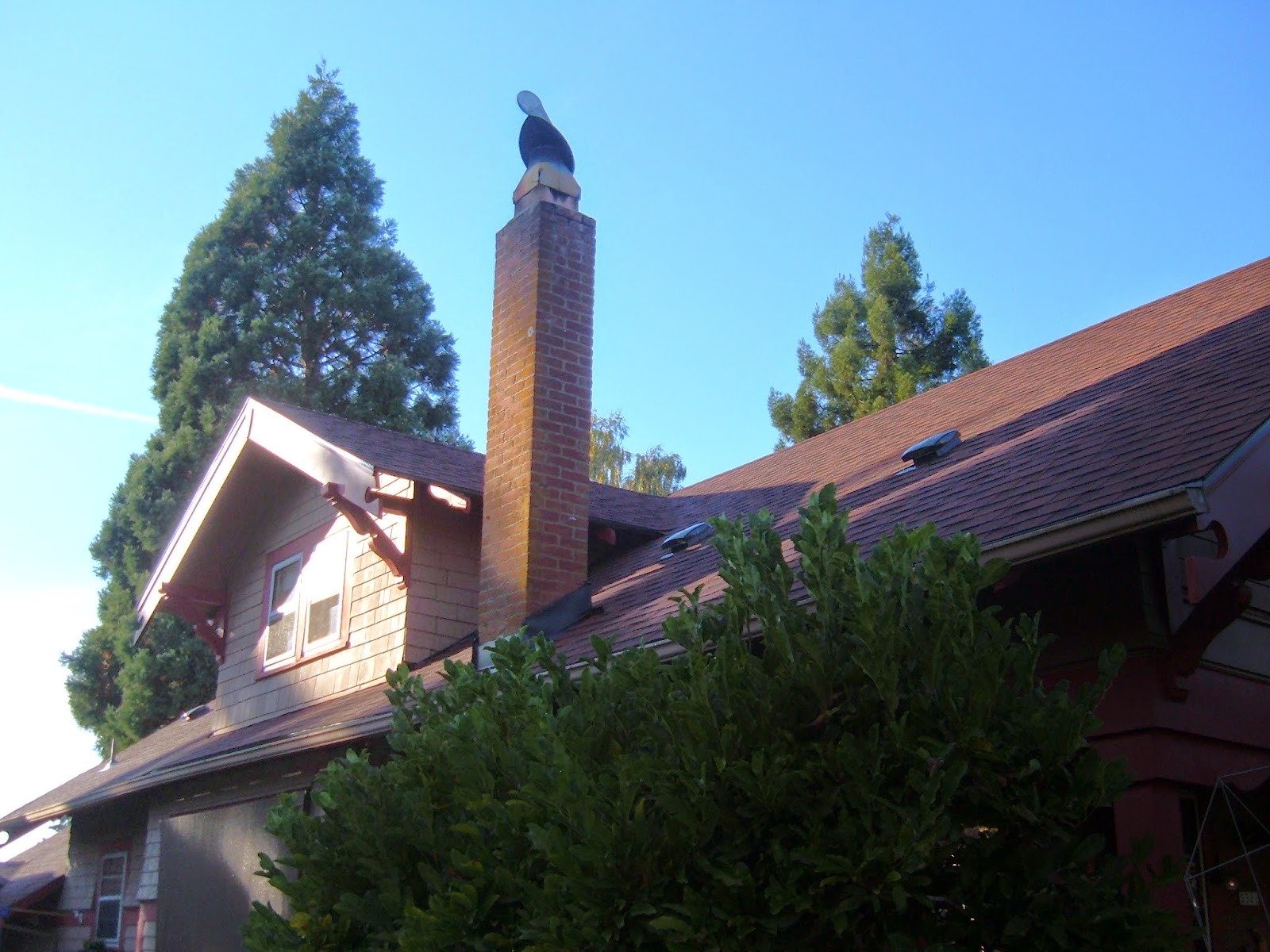 That evening MeMa and I stood back and looked at Menagerie Manor sporting her new look and could almost hear her big sigh of relief.
Posted by Doc at 7:50 PM