Many creatures have been a part of life at Menagerie Manor.  Some stay until health has been restored, whilst others become a permanent part of the menagerie that has given our home its name.  We have become very adept at recognizing potential health issues that either we can take care of ourselves or seek professional help before it gets out of hand.  Unfortunately sometimes even a professional can't work a miracle, thus is the case of Koki.  Twenty one years ago we were at our local pond shop to purchase food for our then small collection of goldfish and two little koi fish that we had in our small backyard pond when I saw that the shop was running a special on the three inch koi for $3.00.  I bought an orange and black and MeMa picked out a lovely multi-colored one.

Our little backyard pond was soon enlarged as the fish grew and we added to our collection.  MeMa's little koi which we named Koki (Glitter in Japanese) soon became larger then the rest, both never missing a meal and the fact that she was a hen.  Every year after about age ten she would become loaded with eggs but after spawning the hungry koi would follow along and eat them before any could hatch, which was probably a good thing as nine large koi was over exceeding the pond population anyway.  This last summer Koki became what looked to us as being ready to spawn again, her appetite and activity were excellent, but then we realized she was still getting bigger around and no spawning.  I started to lessen the amount of food to see if that would make a difference in her girth and at times it seemed to be working but then this last month she was showing signs of a little distress in swimming to lower depths. 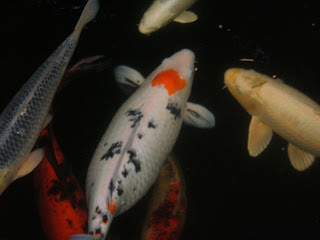 These last two pictures I emailed to the Northwest Koi Club for their resident health expert to look at and hopefully give us an idea of how to help her.  I was so grateful of her quick response to my email and even more surprised that she asked to come out to Menagerie Manor and lend her assistance. Saturday morning I busied myself with chores in the garden until her arrival.  Linda came loaded with gear and a treatment box ready for action. 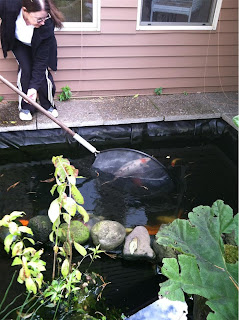 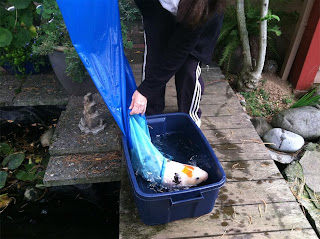 After closely examining her it was found that she was not egg bound but was unfortunately showing possible signs of gradual kidney failure. Linda treated her with antibiotics and then released her back into the pond, where the other fish followed her around and then swirled all around her as if protecting her from being hoisted back out of the pond.  After five minutes of this activity they all swam to the deep end of the far pond.  Linda told me to add forty pounds of pond salt daily for the next three days, then after 21 days  start doing water changes in order to reduce the salt content in the pond.  Except for reimbursing her for the medicated food all this help was volunteered and when I asked if I could pay her for her long drive and hours spent she refused saying she was just happy to help.  We are very saddened at the thoughts of eventually losing Koki to kidney disease, but Linda assured us that our little family of koi are very healthy and that Koki's illness was most likely not environmental.  She also said we should be very proud of the age of our fish.  So the work has started, tonight is the last addition of salt and I have been feeding them a steady diet of the medicated feed.  With my fingers crossed and some prayer I'm hoping to see some improvement in Koki.  Linda could not be completely positive in her diagnosis, so this treatment schedule could possibly give us a cure for Koki.