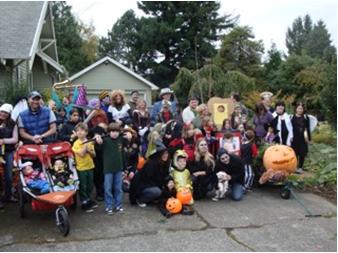 For the last two years neighbor and well known Portland artist, Ann Stores has organised a "Halloween Day Giant Pumpkin Parade". All are told to enter a pumpkin of their own and last year we had a few entries but Ann's was the only Giant pumpkin entered. She saved the seeds and packaged them for distribution among the neighborhood in hopes that others would grow a giant of their own for this years parade. A giant takes up a fare amount of garden to grow its best so I first started mine in the greenhouse but since the gardens at Menagerie Manor are all planted I asked  my mother and father if I could plant my Giant in their garden plot. So a spot by the garden shed was given over to raising a giant.