Ten years ago I suggested to the office staff that we create a more homey atmosphere for ourselves. I suggested plants and an aquarium, the plants were easy since I had a large collection at home. Everyone said they liked the idea of an aquarium so we pooled our money and off I went to the local aquarium store and filled the car with all that I would need. I was advised by the shop owner to purchase just one inexpensive fish to "test the waters", a sacrificial fish if you please. When setting up a new aquarium one almost always has a few losses and since this aquarium was going to be monitored by a bunch of folks that would be a bit of a handful if there were any great losses I agreed with the shop owner and purchased one small orange fan-tailed Lion head Oranda (fancy goldfish). She didn't look like much but the staff soon fell in love with her and I kept praying that I set everything up correctly and she would survive the whole process. 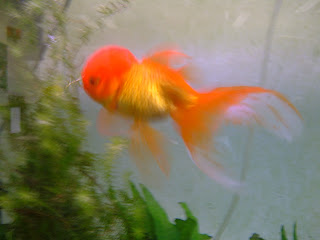 That was ten years ago and the little lion-head has grown to quite the flamboyant office entertainer.
A couple of weeks ago it was brought to my attention that our finny staff member was still the only finny staff member in a very large aquarium. So once again I went to the store and we now have a new member of our staff.

Not as flamboyant as the old girl but they hit it off well these two staff members. I was also informed that they should have names......any ideas would be taken into consideration.
Posted by Doc at 10:21 AM