The Tale of Judy and Squeaker 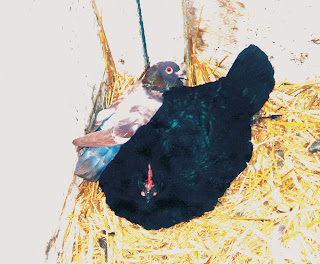 In the summer of 1991 our friend John Speeza called us and asked if we could come to his shop and rescue some chickens that he managed to trap in one of his out buildings. He suspected for some time that a Mexican family was raising them for cock fights. When we got there John took us to a small building and when he opened the door one Rooster and a hen scampered out, I caught the hen as she ran under my legs and there was a rooster and another hen in the building. We found homes for all but one hen this little black Bantam who was very gentle in nature so we called her Judy after Johns wife and gave her free run of the back yard until she got used to the other large hens. She quickly took on the roll as queen of the hen house. Every year the Grade School would make field trips to our house to see all the animals and Judy was a great hit with the kids, it was probably the first time they ever got to hold a chicken.
Judy hatched out several broods of chicks in the years that we had her. Friends would bring fertile eggs for her to sit on. She was a very good mother and in between clutches she was content to sit on golf balls or anything else we would give her. One year we had one of my pigeons hatch out a single squeaker that when mature took an unusual liking to Judy and pretty soon he was following her out into the chicken yard and Judy would spend most of her time chasing all the other hens away from him. In the evening we would always find the two of them sleeping side by side in Judy’s nest. In 1996 the year this picture was taken Judy became very egg bound and no matter how I tried to relieve her problem her health failed and one day I found her dead on her nest. We buried her on the west end of the garden next to the path and placed a block on top of the grave. Squeaker watched the whole process from the top of the hen house. And every day I would find him sitting on the block that we placed on her grave, as we approached he would start cooing mournfully and ruffle up his feathers warning us to keep away. I was worried about his vulnerability sitting on the grave so I started picking him up and tossing him into the air to make him fly with the other pigeons but he always came back to sit on Judy’s grave. One day I herd the neighbor shooting an air rifle on the side of the house and when I went to see what he was shooting at it turned out to be wild pigeons that were attempting to nest under his eves. About two days later I watched Squeaker come flying in a looping sort of way and when I went to see what the problem was I found him lying on the landing board to the pigeon/chicken house dead from a bullet to the neck. I buried him in the same grave that Judy was buried in.
Posted by Doc at 2:26 PM