When I drew back the curtains this morning there was a group of dog walkers standing out front with cell phones pointed my way. One of them gave a wave as I stepped back into the shadow of the parlor. They were taking photos of the old Mt Fuji Cherry tree that is in its height of bloom and others were taking photos of the Monkey Puzzle tree. They were all happily talking and comparing photos while their dogs looked for something more to pee on. 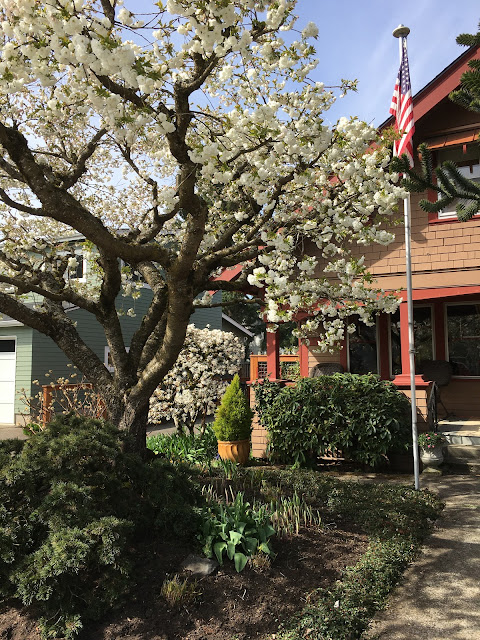 It has been an exhausting week here at Menagerie Manor. The Crazy Cat Lady who lives next door announced that she was going to have her current drive removed and a new one installed. So we told her to hold off her contractor and we would have our old oil tank decommissioned.  A past neighbor three properties over was in the process of  selling her house and was told she couldn't do so until she had her oil tank decommissioned. She got an estimate of five thousand dollars and by time they finished she had to pay fifteen thousand because it leaked and the soil had to be removed as well as most of her cement drive in order to get to the contaminated soil. Her house was built in the 50's and Menagerie Manor was built in 1916 so we expected a considerable expense. That old tank has to have leaked, but we were very wrong. The company that I called arrived promptly and told me that our tank was pre-war so it was probably made of better material. during and after the war there was a shortage of metal so the tanks are an inferior quality. They took a core sample and sent it in to be tested. We received a letter back from the state and they said there was leakage on one end but very insignificant so no further testing was necessary and the tank could be decommissioned. 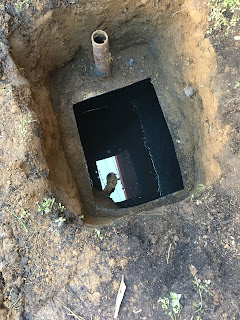 The tank itself is eight feet long and would hold 675 gallons of oil which we had pumped out 30 years ago when we switched to natural gas. They had to dig down and remove a small opening to the top of the tank, clean out the small amount of sludge. and fill it with all of these bags of perlite. 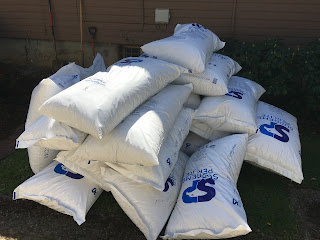 After they left I re-planted the two Rhododendrons back over top of the tank area and it looked as though nothing happened. The whole process cost us just under two thousand dollars. 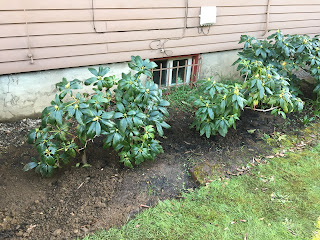 Basically at the same time the oil tank debacle was going on our 20 year old gas furnace decided it was going to retire immediately without two weeks notice. So I called our good friend who happens to own the heating and cooling company that we have always dealt with. So with "friends of the family" discount and several other discounts mostly due to our age and just over five thousand dollars we now have heat 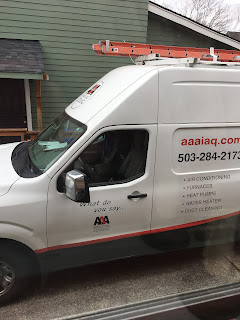 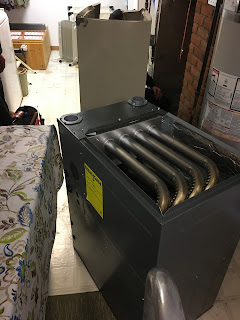 They are returning tomorrow to install an extra heat vent in the laundry room free of charge so our resident tortoises will have an abundance of heat during the colder season. The installers were quite taken by 110 year old Ruby and the young buck Elmo at 85 years.
This is a photo of our eldest son Nathan holding Ruby shortly after I rescued her, Nathan is 41 years old now. 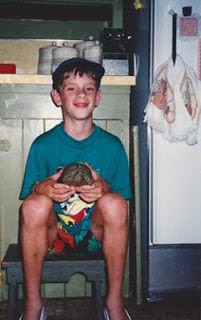 This is myself holding Ruby many years later just before I retired. 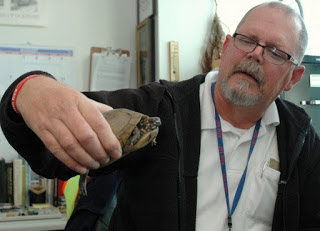 While all these escapades were going on the city was hard at work ripping out a perfectly good sidewalk in front of our home. 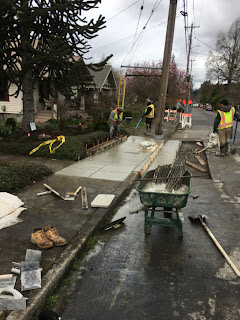 They were very careful not to disturb most of the landscape and by the end of the same day they finished up their work and now Menagerie Manor has a new sidewalk with a wheel chair ramp and no it did not cost me a cent......yet! 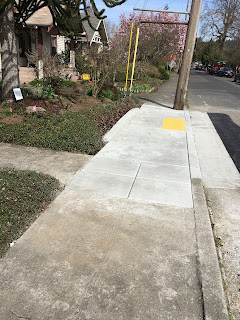 MeMa has been doing very well with her new Chemo regimen surprising her Oncologist because this chemo is considerably stronger causing severe nausea and vomiting which she has not experienced. I have started my new treatment for bladder cancer as well which will continue for nine weeks. It has also proved to show none of the expected side effects.
My 88 year old father fell and broke his hip and is recuperating very nicely in a local re-hab, he says the staff are amazing and the food is good. Two things my father loves are good food and nice people. He is doing so well they may release him to my sisters care by the end of next week.
We both received our second Covid vaccines on Easter Sunday, such a relief to have that out of the way. By the second day we both had slight side effects, MeMa was extremely tired and slept which was the best thing. I just felt like every muscle ached but nothing that kept me down.
As spring blossoms fade, pruning season starts. The roses will soon receive their first dose of fertilizer and the work load increases from there. The trays of annuals in the greenhouse will need to be hardened off before planting out, three different varieties of zinnias, two varieties of marigolds, one tray of spider flowered Cleome or Cleome hassleriana, my grandfathers geraniums, eight tomato seedlings and numerous single pots of other annuals.