Pride In His Work

Our youngest son Ian works for Oregon Memorial, one of about eight people in the nation who are proficient at laser engraving on memorials and monuments. Glass art is another aspect of the job as well, where every color of the rainbow can be added to the memorial giving those left behind a stunning memory of a loved one who has passed.
We have always been very proud of our two sons as I am sure most parent are, but one thing that always strikes me proud is their old fashioned work ethic. Strong work ethics in today's youth is sorely lacking. I will get off my soap box here because that is not the idea of this post.
Ian climbed quickly in the company not just because of his work ethic but mostly because of his artistry. He was given some of the most prestigious jobs and a crew to go with it. MeMa and I decided we would take advantage of an open day and head out to see some of the work our son did. First stop was Springfield and the Vietnam Memorial the city commissioned.

Our next stop was the state capital, Salem and the World War II Memorial. 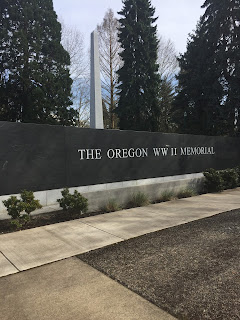 ﻿
Our last stop was Silverton and a small city park dedicated to the citizens of Silverton who gave their lives during the Wars. 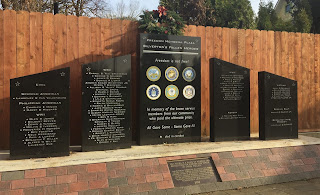 Silverton War Memorial
Posted by Doc at 6:42 AM