Checking On The Cabin

Now that the weather has warmed up a bit (not a spot of snow left here in the city), I have been able to get out in the gardens and get a few things cleaned up. Back in the ice and snow I took a nasty tumble, not breaking anything but evidently bruised or twisted somthing in my right shoulder. So after a bit of gardening, that shoulder really starts to scream at me. I have done a pretty good job of ignoring it and plan on spending all of tomorrow in the garden -  shoulder be damned.
Today however, we rose fairly early and headed up to the cabin which has been left unattened since October. It has been a bit of a worry but since the high elevation of that area has seen much more snow than we did here in the city, it was imposible for us to reach it.
So after loading a few things into the back of the car that might come in handy, we stopped and got some coffee and breakfast sandwiches and off we drove. Once we left the freeway and started climbing, we could see a bit of snow along the verges but all the roadway was clear and dry for the entire drive. I don't know what I was expecting, but everything was fine at the cabin. We did have to clean piles of leaves and debris off the decks and reposition the cover over the deck chairs and table. While MeMa tidied things up inside, I refilled bird feeders and loaded things back into the car. When I had my head in the car, the neighbors came to see if I had anything for them...... 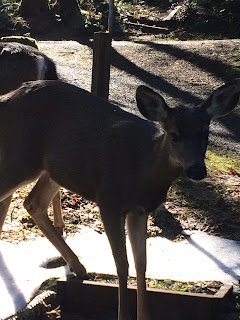 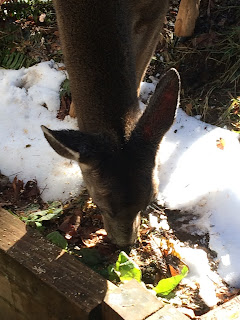 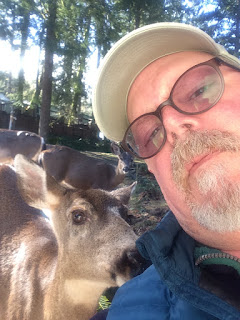 Showing this charming young lady what a "selfie" was, but she was more interested in a good ear nuzzle. When I attempted to continue a conversation, she grabbed hold of my shoulder and snorted spittle and putrid deer breath into my ear. 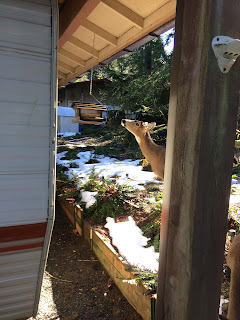 Then I realized she was only sweet talking me whilst her spouse attempted to empty the freshly filled bird feeders.
Posted by Doc at 7:24 PM