The "Curmudgeon" Has His Day


I am usually the first person to arrive at the office, and by time the rest of our office staff trickle in I am busy with the duties of my day and don't really say anything unless directly spoken to.  I have a lot to accomplish each day and everyone knows it, so they usually let me be.  But when there are questions to be answered who do you ask?  Well, that would be Doc Chambers (moi) the old man that has been here longer than most of the buildings on the property.  Work ethics in a lot of the younger employees is one of my biggest gripes and I am not shy about unloading on an individual when they ask a question that would benefit them if they researched and found the answer themselves, the material is all here.  After all, this is the Rail Training Department for heavens sake!  But you see, it is a lot easier to have Doc answer your stupid questions, unfortunately it also brings out the grouchy impatient side of me.
The last person to arrive is my boss and oh yes, I give him hell for it every morning telling him he is supposed to set an example for his employees by arriving first.  But he is used to my verbal chastise and probably think the world ended if I didn't give him hell until he ducks into his office and shuts the door.
Friday morning for me was exceptionally busy as I had taken an extra day off the week before, so when my boss came in I didn't look up but just kept busy with my work.  I did however notice that he did not pass by my desk and go into his office.  I looked up when I heard him clear his throat as he was placing a large box of pastries on my map table in the center of the room. And before the staff could dive into them he said "the large apple fritter is Doc's", and then he quietly walked into his office and shut the door.
Promptly at noon he emerged from his office and declared that he was hungry and would we like to join him for lunch out?  We ate at a local Italian restaurant and when the bill came he paid for mine.
After arriving back at the office I again busied myself with work as the days events were seriously having an effect on how much work I was going to have to do before leaving for the weekend.  Once again I heard my boss clearing his throat, but when I looked up there was not only the entire office staff but the director and all the secretaries and the staff from the adjacent offices all standing and looking at me with goofy smiles on their faces.  I looked at them all with impatient frustration and said "What do you want?"  The youngest staff member "Young David" said, "See I told you this would just piss him off." And I think I detected a panicked shiver run through his body.   "I have a lot of work to do, so tell me what you want and then get back to work." My boss came forward  holding a small package and then started in telling everyone how this office would not have run as well as it does without Doc for the last 35 years and blah blah blah.  I stopped him mid blah and told him he missed it, it was last week on the 18th and it has only been 34 years.  I then went on by telling him they make these things called calendars and it might behove him to purchase one so he wouldn't have to depend on me to keep him straight.  He gave me a very nauseating patient look and said that I was quite wrong that my anniversary date is the 26th and it has been 35 years to which "Young David's" shaky little voice piped up with an agreement.  I gave him a look that sent him scurrying back into the safety of the crowd and then thought about this news.  I was wrong and they were right.....damn it!  I smiled and thanked everyone when I opened the package and found a gold pin with three small diamonds around the company logo.  After everyone said their piece, one of the newer secretaries said "We should all sing for "He's a Jolly Good Fellow." I think Young David probably wet himself when I bellowed "NOOOOO!"  I thanked everyone and then said, "Ok everyone needs to get back to work now, it's Friday and I have lots to do even if you all don't." Marylin, one of the Training Supervisors looked at me and said, "You're such an old curmudgeon."  The office quickly cleared and as I sat down at my desk I thought, really, has it  been thirty five years? 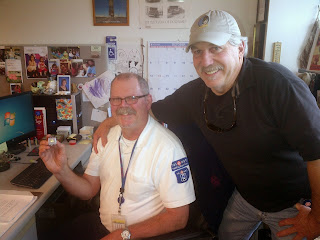 The "Curmudgeon" and his boss
Posted by Doc at 8:57 PM