When we boarded the plane in Maui to return home the temperature was 82 degrees and when we arrived home in Portland it was 28 degrees.  Reality sucks! MeMa and I had a wonderful time over the holiday, we missed the Little Terrorists and the dogs but it was glorious to be away from all the responsibilities of home and work.  All was not smooth though, but then paradise wouldn't be paradise if the transition was without hurdles.
For starters our flight from Portland was delayed two hours, so add that to the fact that we got to the airport two hours early made for a very leisurely breakfast once we got through security. As airports go, Portland's is very nice.  The flight was wrought with turbulence and half an hour into the flight the young gentleman behind us got quite ill all over the back of our seats and the blanket that I quickly threw over our heads.  The stewardess graciously took it from me and returned with a fresh one.  So we had the smell to deal with all the rest of the trip.
It was raining when we arrived on Maui, but at least it was a warm rain.  Our first stop after picking up the rental car was Costco, conveniently located across the road from the airport. They had my single malt Scotch for a very reasonable price, my shopping was done but willingly pushed the cart while MeMa purchased things like prepared salads, sun screen, orange juice.....such a practical woman.  Then it was off to Sugar Beach Resort were we had a lovely beach front condo on the third floor.

﻿
﻿
﻿ ﻿﻿﻿﻿﻿﻿﻿﻿﻿
Our second day MeMa had booked a tour to the "Road to Hana" which was done in a twelve passenger mini bus.  I recommend this tour over anything else.   I have double vision in my peripheral so MeMa would have been the driver had we not taken the tour.  Half hour into the narrow switchback roads with single lane bridges every few miles we would have had to turn around and not completed the trip.  Our driver and tour guide Tim was fantastic and reciting the history of every landmark and waterfall as though he lived during those ancient times.  The tour also included a catered breakfast and a very nice hot lunch at a flower farm.
﻿
﻿

﻿
﻿
That night we had record rainfall, and when I stumbled out of bed to start the coffee I smelled dirt! 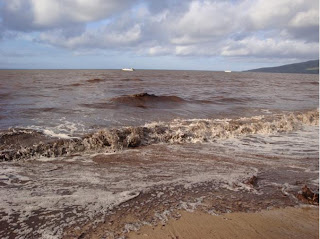 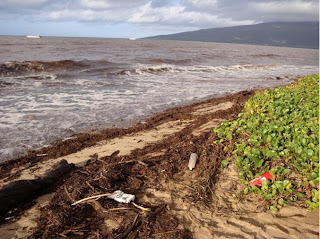 I looked out to see chocolate brown waves and I could no longer see the sand because of all the debris.  The rains had washed all the debris into the culverts which then drain into the ocean leaving it brown as far as you could see.  And that is the way our beach remained the rest of our stay.  The good thing was that it was just in our area so we could drive five minutes either direction and have clean beaches and blue water.

Regardless of the weather we started out with, Maui was wonderful and we plan on a return trip although probably not over Christmas. Here are some shots of how they decorate there.
﻿
﻿
﻿﻿﻿﻿
﻿﻿﻿﻿

We also went on a sunset whale cruise, drinks and pupu's  provided.

﻿﻿﻿﻿﻿﻿﻿
﻿﻿﻿﻿﻿﻿﻿
When we make a trip to the Islands I always plan on bringing home some new orchid to add to my collection so we planned a trip to "Fragrant Orchids of Maui".  MeMa says this was her favorite day which surprised the heck out of me because she usually rolls her eyes when it comes to my orchids.  The nursery was out in the middle of the rain forest on roads that probably confuse even a resident, but with a few turn backs we managed to get there.  As we stood at the gate one couldn't help but notice the complete lack of man made noise, all you could hear were the sounds of nature.  I then noticed growing in the trees next to the gate several orchids. Stepping forward to get a better look, I bumped the gate and out of nowhere arrived a band of barking dogs.  Being the dog people we are they didn't bark long before they all turned into a mass of wiggling overgrown puppies all vying for our attention.  The owner soon appeared down the garden path so I apologized for turning her guard dogs into puppies to which she said, "Oh no worries, they are just door bells."  We were then shown the way to the orchid house. 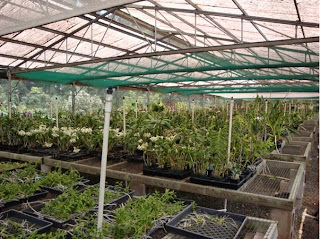 In truth I could have gone home with dozens of orchids but I have decided that since my collection is so large that I should limit myself to one new one every time we visit the Islands.....a good plan? I immediately found my orchid .......